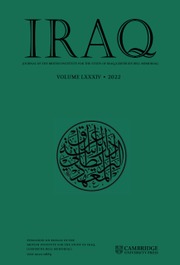 On some Assyrian Ladies

Legal documents relating to marriage have always attracted the attention of Assyriologists, and rightly so, since they throw light on the social as well as the legal customs of their time. Although the laws and contracts between them have permitted some detailed studies of marriage customs in Babylonia, the evidence for Assyria is much scarcer, and in his edition of Neo-Assyrian legal documents A. Ungnad was able to transliterate no more than four “marriage texts”, three of which belong to a single archive and are extremely similar in content. However, the excavations at Nimrud have made substantial additions to our documentation, and the time seems ripe to summarize what evidence is now available, and to present some which is new. The subject of marriage in any society is a complex one, and it is hardly necessary for me to point out that no attempt has been made to pursue the legal or anthropological implications of these texts. In the first place, the writer is not qualified to do this in either field, and secondly, it seems very doubtful, given the variety displayed by the texts in question, whether we yet have a body of evidence sufficient to warrant a more penetrating study. Nevertheless, it is clearly desirable that what evidence we do have should be readily accessible, even to the non-cuneiformist, and we hope that this medley will serve a purpose.

4 For the text, Saggs, H. W. F., Iraq 30 (1968), Pls. LII and LV, with p. 170CrossRefGoogle Scholar; the join was made when recording seal impressions, and the text was collated by the writer at the same time. We wish to express our gratitude to the staff of the Iraq Museum for their help at all times with the collation of texts, in particular the two TR texts re-edited here.

6 The meaning of rakiltu is problematical. Riksu may be used for a written marriage document in the Middle Assyrian Laws (Cardascia, loc. cit., 181: “une preuve écrite du mariage, requise à peine de nullité”), while rikistu is the usual Babylonian term for a legal contract (-document). Another possibility which should perhaps be preferred is that rakiltu relates to the more literal meaning of rakāsu and means “equipment, accoutrements” or such like.

9 MÍ-u-te (and MÍ-su-ti in ARU 57) are taken as writings of sinnišuti (sinnissūtu) by von Soden, W. in AHw, 1048aGoogle Scholar. However, the parallelism in ADD 960 and 961 of KUR(.)MÍ.MEŠ and KUR(-)i-sa-(a-)te strongly suggests that the syllabic value of MÍ.MEŠ is in fact isāte, and allows us to compare 'št (which is not regular Aramaic) in the docket of ARU 55. Hence we propose that in Neo-Assyrian texts MÍ should be read as (*ištu=)issu, with an abstract formation issūtu, “wife-hood”. Texts such as these and ARU 37 make it clear that the word itself means “wife” (like Frau), and we might take the opportunity to point out that the logogram MÍ É.GAL (with its variants) could therefore be read (is)su-ēkalli (and not ša-ēkalli); cf. Millard, A. R., Ugarit Forschungen 4 (1972), 161–2Google Scholar.

13 e-şip-ši SUM-an: the direct object of iddan is not expressed in writing, and there seems to be no candidate for it other than the dowry as a whole.

14 It is of course true that a Phoenician goddess features in the name of the girl's mother.

15 This is one of a small archive excavated by Dr. Tariq Madhloom, the publication of which is being undertaken by Dr. Behijeh Khalil Ismail jointly with the writer. I have to thank Dr. Behijeh for her generous permission to quote from this text (IM 76882) in advance of its final publication, and Dr. Madhloom for permission to work on them in the first place.

16 tal(l)aktu is not attested with this meaning, translated according to the context; note the plene writing to indicate the word's predicative force.

18 A group of tablets dealing principally with women and apparently coming from the archives of the šakintu was found in rooms SE 14–15 (cf. Oates, D., Iraq 21 (1959), 110Google Scholar). The publication of these texts is currendy in preparation by Dr. Dalley and the writer.

20 On the Ur text see most recently Renger, J., Or NS 42 (1973), 259–73Google Scholar. It is perhaps worth mentioning that any study of Neo-Assyrian marriage would be incomplete without a consideration of the known Aramaic documents of a similar kind, a fact of which Dr. Greengus was well aware (cf. Greengus, S., “The Old Babylonian Marriage Contract”, JAOS 89 (1969), 522Google Scholar).

On some Assyrian Ladies
×

On some Assyrian Ladies
×

On some Assyrian Ladies
×
×