Russian Orientalism to Soviet Iranology: The Persian-speaking World and its History through Russian Eyes 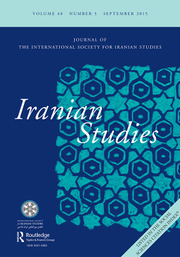