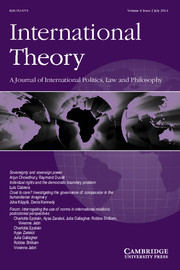 Forum: Interrogating the use of norms in international relations: postcolonial perspectives