When “Adjusted” People Rebel: Economic Liberalization and Social Revolts in Africa and the Middle East (1980s to the Present Day) 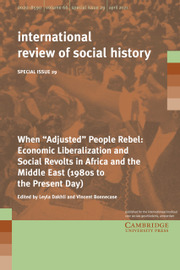