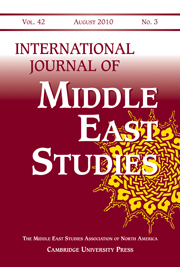 How Does New Scholarship on Christians and Christianity in the Middle East Shape How We View the History of the Region and Its Current Issues?