To the Editor—Collaborative public health partnerships between competing healthcare system hospitals are uncommon in today’s healthcare environment, despite their potential for improving community health.Reference Prybil, Scutchfield and Dixon 1 – Reference Ainsworth, Diaz and Schmidtlein 4 One potential area of collaboration between hospital systems is management of influenza season parameters and messaging team members and the community. Traditionally, acute-care facilities make independent decisions regarding influenza season parameters. In geographic areas with multiple healthcare systems, the lack of coordination in influenza-season decision making can lead to a local patchwork of policies and messages. These different public health messages can be confusing to patients and the public, potentially affecting patient care, visitor access, and patient satisfaction. 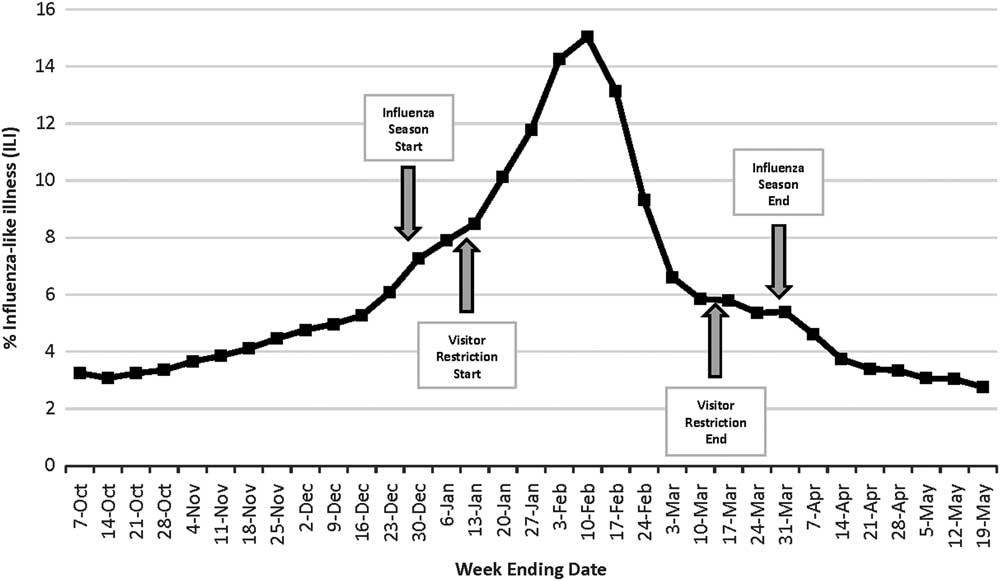 Visitor restrictions, defined as the restriction of visitation to an acute-care facility by children <13 years of age, was instituted by all healthcare systems when the ILI rate was ≥7% and lifted when the ILI rate returned to <7% (Fig. 1). For the 2017–2018 influenza season, visitor restrictions were initiated on January 12, 2018, and lifted on March 16, 2018. When the ≥7% threshold was reached, a coordinated effort was made between the healthcare systems to provide consistent messaging to team members and the media about who would be restricted from acute-care facilities and when. This was particularly effective for communicating with local media outlets as the media reported the collective decision using a single story. 7 , 8 In years past, multiple media stories would have been published as each system made their decision, leading to mixed public messaging. Likewise, when the level of influenza activity fell to <7%, the media was informed that visitor restrictions would be lifted. We found that marketing and communication professionals were vital to the success of this process.

One additional benefit was noted. In our communities, team members often work in multiple facilities moving between the different healthcare systems. A unified approach to the influenza season reduced confusion when team members moved between hospitals.

Our approach has some limitations. The chosen thresholds for our decisions were based on clinical judgement and not published research. In addition, the size of some of the healthcare organizations meant that a few hospitals were geographically distant. Thus, the ILI rate near those facilities might vary significantly from the other facilities in the collaborative. This distance has led to the consideration of developing additional collaboratives in those areas.

The development of this process was a simple solution that improved communication between competing healthcare systems, simplified public messaging around influenza season, and standardized influenza season parameters in a single geographic region. The collaboration and exchange of information also increased the congeniality between the healthcare systems, and the participants found it to be informative and enjoyable. We hope that we can apply this approach to additional issues to benefit the communities that we serve.