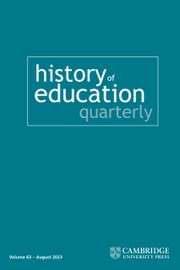 Does the Subject Matter? Dewey, Democracy, and the History of Curriculum 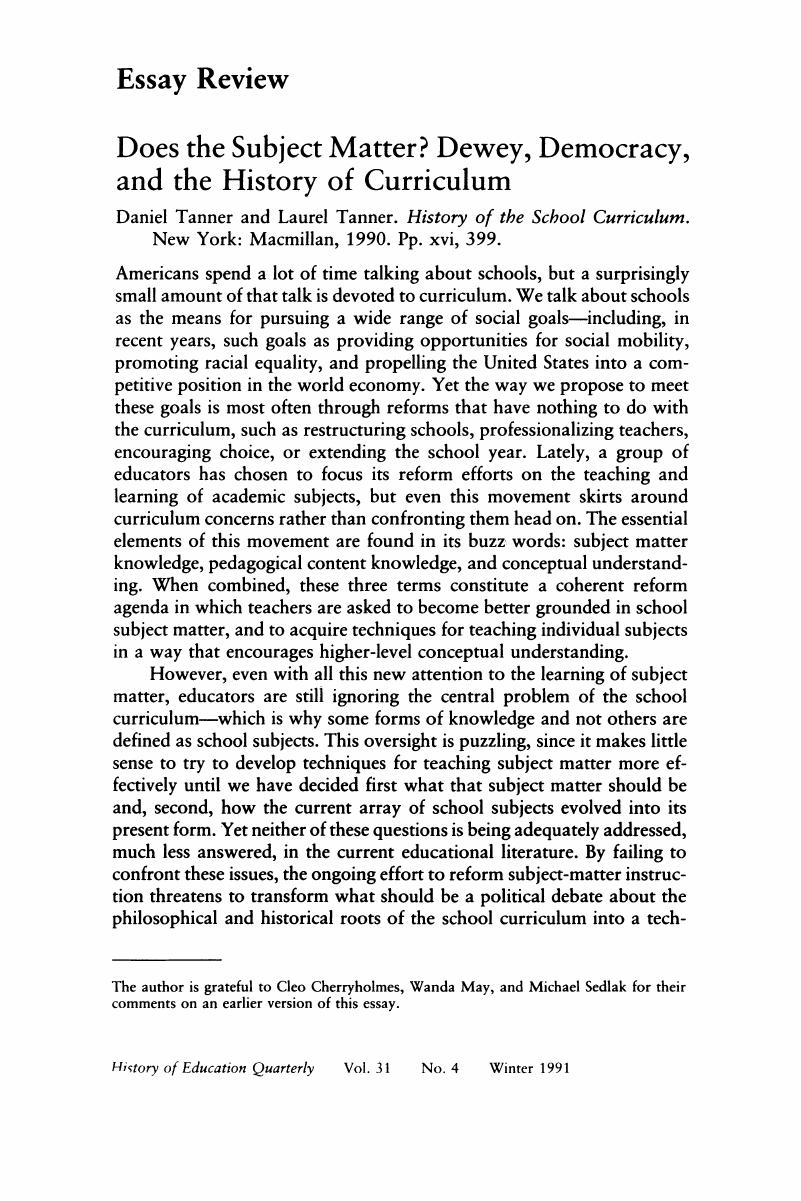 2. See, for example, the discussion of this problem by Lagemann, Ellen Condliffe, “The Plural Worlds of Educational Research,” History of Education Quarterly 29 (Summer 1989): 186–214.

3. The Tanners' frequent references to “battles” are reminiscent of another great believer in educational progress, Cubberley, Ellwood P. For example, according to the Tanners, the three main periods in American educational history are defined by the “battle for free, secular state school systems,” the “battle for universal secondary education,” and the “battle for extension of opportunity for higher education” (p. 134).

8. However, applying a Dewey-style curriculum to a selective subset of the student population serves the same differentiating function as the traditional curriculum, as in the case of private progressive schools designed for an upper-middle-class clientele.

16. One way of thinking about this outcome is that Dewey's curriculum proposal was poststructural and that it was vanquished by the structuralism embodied in the traditional academic disciplines that constitute core subjects in schools.

17. What exists is an array of solid but less than comprehensive studies of the field. The most thorough and balanced account for the twentieth century is Kliebard, Herbert M., The Struggle for the American Curriculum, 1893–1958 (Boston, 1986). On the high school curriculum, see Krug's, Edward A. two volumes, The Shaping of the American High School, 1880–1920 (Madison, Wis., 1964) and The Shaping of the American High School, 1920–1941 (Madison, Wis., 1972). A good short account of the same topic is Cohen's, David K. “Origins,” in The Shopping Mall High School: Winners and Losers in the Educational Marketplace , ed. Powell, Arthur G., Farrar, Eleanor, and Cohen, David K. (Boston, 1985), 233–308. The classic study of Progressive education is still Cremin's, Lawrence A. The Transformation of the School: Progressivism in American Education, 1876–1957 (New York, 1961). For a perceptive interpretation of curriculum developments at various points in the history of American education, see the appropriate chapters in Church, Robert L. and Sedlak, Michael W., Education in the United States: An Interpretive History (New York, 1976). For a good case study of curriculum history in one city (Minneapolis), see Franklin, Barry M., Building the American Community: The School Curriculum and the Search for Social Control (Philadelphia, 1986).

Does the Subject Matter? Dewey, Democracy, and the History of Curriculum
×

Does the Subject Matter? Dewey, Democracy, and the History of Curriculum
×

Does the Subject Matter? Dewey, Democracy, and the History of Curriculum
×
×