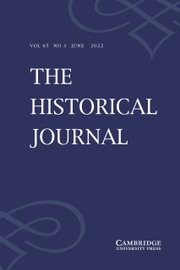 Roundtable: Transnational Patriotism in the Mediterranean, 1800–1850