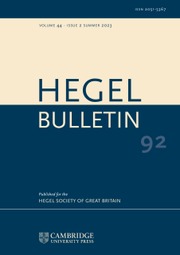 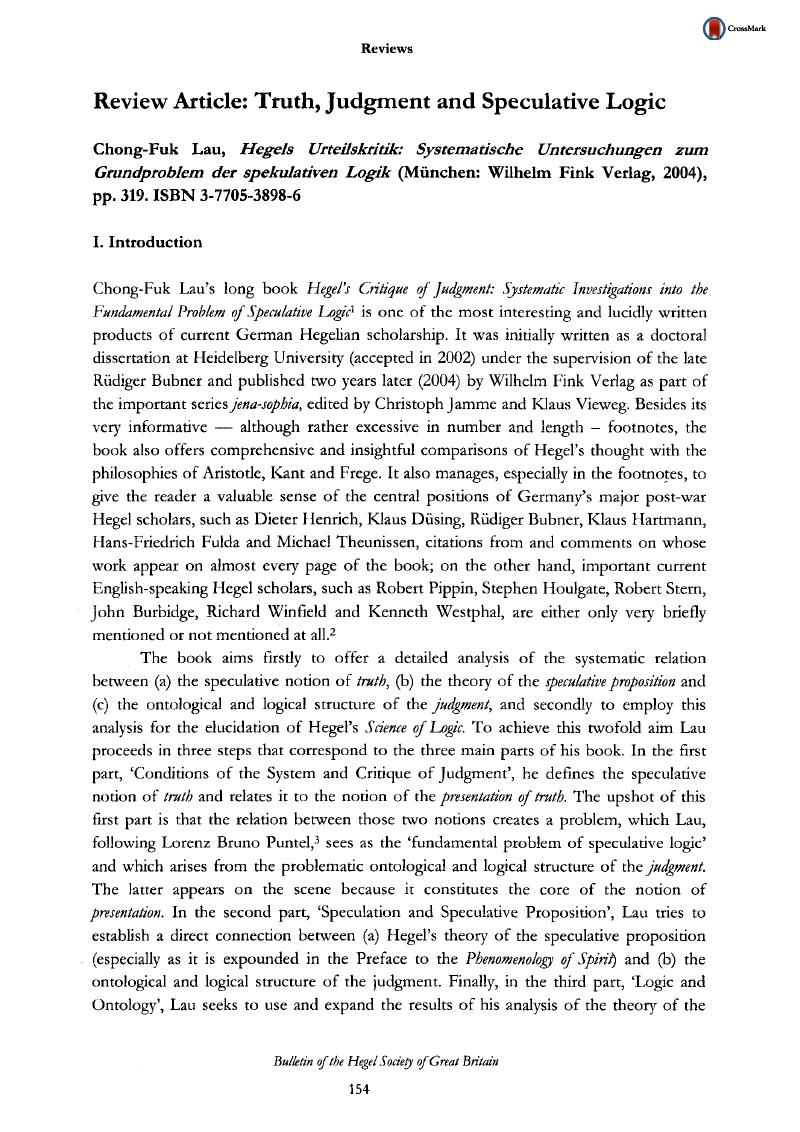 1 All references in the text are to Lau's book. All translations are mine.

2 But Lau refers quite extensively to Brandom, Strawson, and Quine.

10 See Düsing, K. (1986), ‘Syllogistik und Dialektik in Hegels spekulativen Logik’, in Henrich, D. (ed.), Hegels Wissenschaft der Logik. Formation und Rekonstruktion, Stuttgart: Klett-Cotta, 20ff Google Scholar. and Düsing, K. (1995), Das Problem der Subjektivität in Hegels Logik. Systematische und entwicklungsgeschichtliche Untersuchungen zum Prinzip des Idealismus und zur Dialektik, Bonn: Bouvier, 198ff Google Scholar. According to Düsing, Lau argues, the notion of the speculative proposition, as described in the Preface, denotes a special philosophical judgment, through which the absolute identity of the relata would be expressed. The predicate would in this case refer, not to just one of the determinations of the subject, but to its essence, to what defines it and makes it what it is. However, as Düsing himself acknowledges, if that is the meaning of the speculative proposition, it must by the standards of the Logic dramatically fail to express the speculative truth. This is because, firstly, the Logic explicitly denies that the definition could function as the locus of truth, since in this case the subject would become a ‘sheer opinion,’ an ‘indeterminate substrate,’ that is, an element which is superfluous in the judgment; secondly, such speculative proposition would fail to accommodate the difference and non-identity of the relata; and, thirdly, with no difference and non-identity the processual structure of the absolute would be turned into something static. Moreover, Düsing's understanding of the speculative proposition entails that that there is a special form of sentence in which speculative truth could be accommodated; but Hegel is very clear that no sentence could ever express the speculative truth. Given these problems, Düsing is forced to claim that Hegel formulated the theory of the speculative proposition in his Phenomenology years and abandoned it by the time he developed the Logic. However, as Lau correctly points out, Düsing must be mistaken here, for (a) Hegel had already expressed his criticism of the sentence as a locus of truth in his Frankfurt and Jena writings and (b) the Preface to the Phenomenology, in which the notion of the speculative proposition is developed, was intended to serve as the introduction to the whole system (including the discipline of speculative logic).

11 Note that the speculative proposition is now a complex structure, constituted by (a) the movement of self-critique and (b) its result, the collapse of the partial identity of the relata.

13 See Schelling, F. W. J. (1856–1861), Sämmtliche Werke, Schelling, K. F. ed., Part I, Vol. 10 Stuttgart: Cotta, 126–164, esp. 131–135Google Scholar. For the definitive refutation of Schelling's understanding of the Logic see Houlgate, S. (1999), ‘Schelling's Critique of Hegel's Science of Logic ’, The Review of Metaphysics 53: 99–128 Google Scholar and White, A. (1983), Absolute Knowledge: Hegel and the Problem of Metaphysics Athens, Ohio: Ohio University Press, esp. 43–66 Google Scholar. It is here worth emphasizing that Lau does not cite these two works in his bibliography, despite the fact that they were published long before he published his book.

14 Cf. Houlgate, S. (2006), The Opening of Hegel's Logic: From Being to Infinity (West Lafayette, Indiana: Purdue University Press Google Scholar: ‘Although earlier categories prove to be imperfect in comparison with later categories, the disclosure of such relative imperfection is not what drives thought oil from one category to another in the first place. Thought does not compare a specific category with the absolute Idea, judge that category to be deficient, and then move on to a new category that better approximates to the Idea.’ (48)

15 Compare my position to Harris, E. E. (1983), An Interpretation of the Logic of Hegel (Lanham: University Press of America Google Scholar: ‘The general principle of the dialectic, so often and so variously misrepresented, is the fundamental holism which grounds it and of which it is the expression, and when this is clearly and firmly grasped, many difficulties and obscurities melt away, and what (at first sight) seem arbitrary connexions and transitions are seen to be in place).’ (xii;) See also Harris, (1993) The Spirit of Hegel, Atlantic Highlands: Humanities Google Scholar: ‘The essential feature of Hegelian dialectics is not the triadic arrangement of opposites so much as the holism from which the triadic structure results.’ (142)

16 This is exacdy what Houlgate does with the dialectic of the categories in the logic of being in Houlgate 2006.

17 Cf. Hegel 1986:Vol.I:20: ‘Die Denkformen sind zunächst in der Sprache des Menschen herausgesetzt und niedergelegt; es kann in unseren Tagen nicht oft genug daran erinnert werden, daß das, wodurch sich der Mensch vom Tiere unterscheidet, das Denken ist. In alles, was ihm zu einem Innerlichen, zur Vorstellung überhaupt wird, was er zu dem Seinigen macht, hat sich die Sprache eingedrängt, und was er zur Sprache macht und in ihr äußert, enthält eingehüllter, vermischter oder herausgearbeitet eine Kategorie; so sehr natürlich ist ihm das Logische, oder vielmehr: dasselbige ist seine eigentümliche Natur selbst.’ Note that this passage does not support Lau's position. Hegel is not saying here that the ‘thought-determinations’ (i.e. the determinations of the concept or of what there is in truth) are born in or by language. What he says is that with respect to human beings, the ‘thought-determinations’ appear first in (their) language. Humans appropriate the logical structure of the world through language, and the former permeates their life and thinking through the latter. But, of course, this does not mean that if there was no language, the world would have no logical structure.

18 I am grateful to Professor Stephen Houlgate for detailed comments on this article. I would also like to thank Sebastian Stein and Chris Bassett for helpful discussions.