SPECIAL ISSUE: The future of EU health law and policy 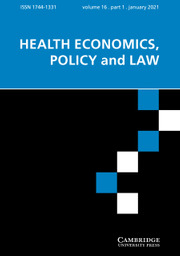