Candidate Selection: Parties and Legislatures in a New Era 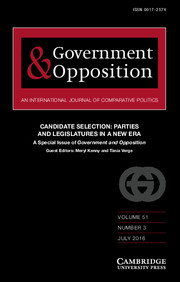