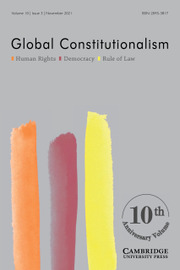 Debates about ‘constitutionalism’ have become an important trend in WTO scholarship. Despite over two decades of interest, however, a coherent definition of the term and its content remain out of reach. This paper argues that ‘constitutionalism’ should be approached not as something that can be measured or assessed empirically, but rather as a ‘discursive contest’: a debate in which participants intervene on behalf of particular understandings of how the system does or should operate. Approaching constitutionalism as a discursive contest adds to the literature by shifting the focus to an analysis of how ‘constitutional talk’ produces knowledge about the WTO, and how this knowledge in turn structures perceptions about the way government works and the possibilities for action. Providing examples from scholarly debates and WTO practice, the article aims to make concrete the relationship between truth and government and the implications of discursive contests over constitutionalism in the field of WTO law.

4 Though this will undoubtedly cause some distress for readers familiar with constitutionalism debates, this paper purposefully ignores the careful distinctions that scholars in domestic, European Union, and other contexts have made between the terms ‘constitution’, ‘constitutional’, and ‘constitutionalizing’. Though these distinctions are important and useful, they are not addressed in this analysis, as in WTO-related debates, the three terms all share the same discursive trajectory, with the differences being primarily in terms of concreteness, legality, and degree. The author hopes that readers will indulge this conflation, as it assists in presenting the argument in this essay as clearly and simply as possible.

10 Over the past several decades, scholars have begun to make use of Foucault’s theories regarding governmentality to study the international. See, e.g., Larner, W and Walters, W (eds), Global Governmentality: Governing International Spaces (Routledge, New York, 2004); Perry, RW and Maurer, B (eds), Globalization Under Construction: Governmentality, Law and Identity (University of Minnesota Press, Minneapolis, 2003); Neumann, IB and Sending, OJ, Governing the Global Polity: Practice, Mentality, Rationality (University of Michigan Press, Ann Arbor, 2010). However, there has been some discussion regarding whether it is possible to speak of a truly global ‘neoliberal governmentality’. See, e.g., Chandler, D, ‘Critiquing Liberal Cosmopolitanism? The Limits of the Biopolitical Approach’ (2009) 3 International Political Sociology 53; Joseph, J, ‘The Limits of Governmentality: Social Theory and the International’ (2010) 16 European Journal of International Relations 223; Selby, J, ‘Engaging Foucault: Discourse, Liberal Governance, and the Limits of Foucauldian IR’ (2007) 21 International Relations 324. Whether or not neoliberal governmentality can be said to be a truly global phenomenon, this paper maintains that it is possible to use the techniques developed by Foucault – in particular his analysis of the relationship between truth and government – to study institutional operations at the international level.

12 The forms of knowledge discussed in this paper are, generally speaking, mid-level institutional values. Though all may be said to draw on liberal and neo-liberal governmental rationalities, they represent distinct iterations within this broader framework of ‘knowledge’ regarding the driving forces behind individual and governmental behaviour.

15 Joseph Weiler has argued in the EU context that constitutionalization also includes a metaphysical component: the development of a kind of ‘spirit’ that cements the social contract within the constitutional community. See Weiler, JHH, ‘To Be a European Citizen: Eros and Civilization’ in Weiler, JHH, The Constitution of Europe (Cambridge University Press, Cambridge, 1999) 324.

19 For an excellent analysis of the lessons that can be drawn from this debate, see Zang, D, ‘Textualism in GATT/WTO Jurisprudence: Lessons from the Constitutionalization Debate’ (2006) 33 Syracuse Journal of International Law and Commerce 393.

22 See Howse, R and Nicolaïdis, K, ‘Legitimacy through “Higher Law”: Why Constitutionalizing the WTO is a Step Too Far’ in Cotter, T and Mavroidis, PC (eds), The Role of the Judge in International Trade Regulation (University of Michigan Press, Ann Arbor, 2003) 307.

30 Joel Trachtman refers to this as the issue of ‘tertiary rules’: ‘In the US and EU systems of dual constitutions, at the local and at the central levels, a third type of rule has developed in the H.L.A. Hart hierarchy. Primary rules are normal legislation. Secondary rules are more in the nature of constitutional rules, determining authority to legislate, interpret and determine conflicts between primary rules. But there can also be conflicts between secondary rules. A special type of secondary rule, or perhaps one would call it a ‘‘tertiary rule’’, determines the allocation of authority between constitutions.’ Trachtman (n 23) 627.

48 The GATT was enacted ‘provisionally’ pending the coming into force of the never-enacted International Trade Agreement.

50 Jeffrey Dunoff describes how Jackson presented his ideas at a London seminar attended by Uruguay Round negotiators, following which they were taken up by then-GATT Director-General Arthur Dunkel and included in his Draft proposal for the formation of a WTO. Dunoff (n 23) 652. See also Howse, R, ‘Tribute – the House that Jackson Built: Restructuring the GATT’(1999) 20 Michigan Journal of International Law 107.

51 Cass (n 3) 42. As a caveat, it should be pointed out that this question – like several of those discussed in the second and third sections, is not necessarily a ‘constitutional’ one. Rather, it becomes a ‘constitutional’ question when someone – in this case, a noted WTO scholar – describes it as such. This in itself is a constitutional assertion that should be analysed as part of the overlapping contests regarding the meaning and purpose of constitutionalism.

57 Indeed, the WTO Agreement prohibits the Appellate Body from making definitive interpretations. WTO Agreement Article IX:2 (‘The Ministerial Conference and the General Council shall have the exclusive authority to adopt interpretations of this Agreement and of the Multilateral Trade Agreements.’).

59 See Panel Report, United States–Measures Relating to Zeroing and Sunset Reviews, WT/DS322/R (20 Sept 2006) para 7.99, noting that: ‘while we recognize the important systemic considerations in favour of following adopted panel and Appellate Body reports, we have decided not to adopt that approach …’.

62 Cho, S, ‘Global Constitutional Lawmaking’, 31 University of Pennsylvania Journal of International Law (2010) 622. Again, here, it should be noted that the debate over zeroing is not necessarily ‘constitutional’, but is made so as a result of work like Cho’s. It could also be seen as a debate about different understandings of balancing, about proportionality, about sovereignty, about jurisdiction, or any number of other topics that themselves may or may not fall under a particular understanding of constitutionalism.

64 Several scholars make reference to this facet of constitutionalism. Dunoff, for example, argues that ‘we can understand … constitutionalism at the WTO as offering constitutionalism as a mechanism for withdrawing an issue from the battleground of power politics and as a vehicle for resolving otherwise politically destabilizing political disputes through reference to a meta-agreement’. Dunoff (n 23) 662; Jan Klabbers, similarly, notes that ‘one of the main attractions of constitutionalism is to suggest that there is a sphere beyond everyday politics comprising values that cannot … be affected or changed’. Klabbers (n 32) 31.

68 There is an incredibly extensive literature on this topic. See generally Esty, DC, Greening the GATT: Trade, Environment, and the Future (Institute for International Economics, Washington, DC, 1994).

78 DiMascio and Pauwelyn (n 75) 83. Horn and Weiler note that the competition test does limit legitimate policy objectives to those listed in Article XX, but stressing that this is compensated for somewhat by the fact that Article XX is broad and open-textured. Horn and Weiler (n 77) 29.

81 Theodore Kill provides an interesting concrete example, arguing that ‘the concept of “rights-based constitutionalism” was central to the coherence of the Panel Report in Mexico–Measures Affecting Telecommunications Services’. Kill, T, ‘The Evidence for Constitutionalization of the WTO: Revisiting the Telmex Report’ (2011) 20 Minnesota Journal of International Law 65.