Shielding the Market from the Masses: Economic Liberalism and the European Union 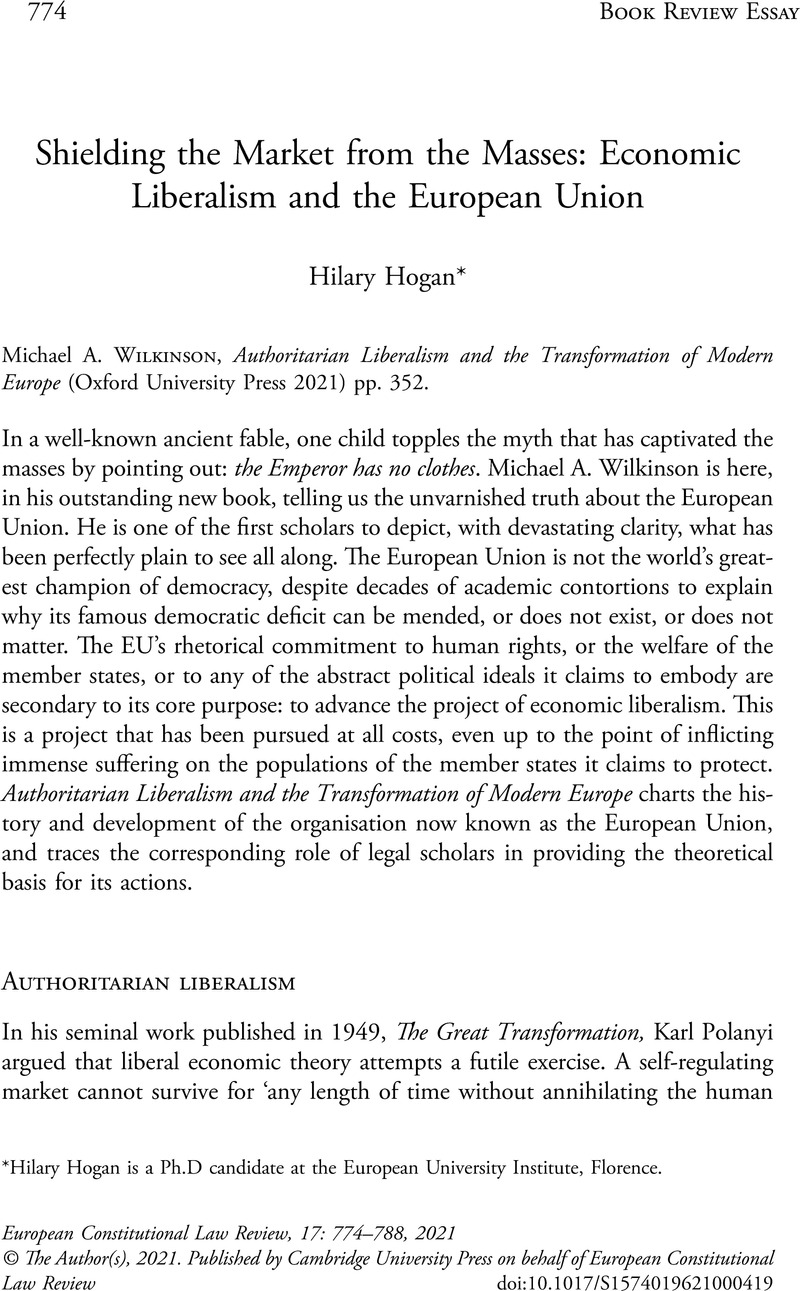 11 C. Joerges, ‘The Overburdening of Law by Ordoliberalism and the Integration Project’, in Ordoliberalism, Law and the Rule of Economics (Hart Publishing 2017) p. 183.

19 E. Balibar ‘The Rise and Fall of the European Union: Temporalities and Teleologies’, Constellations (2014) p. 202.

20 As he describes at p. 275: ‘This blockage of the constituent power, the “undoing of the demos” did not occur only after Maastricht. It was cemented at Maastricht, but its foundations were laid at the outset of the post-war project’.

21 Art. 127 TFEU. The European Central Bank has been described as ‘the most independent central bank in the world… There is hardly an institution that corresponds more closely to the ideal of authoritarian liberalism’. See, W. Streeck, ‘Heller, Schmitt and the Euro’, European Law Journal (2015) p. 369. See also B. Eichengreen, The European Economy since 1945: Coordinated Capitalism and Beyond (Princeton University Press 2006) p. 355 and K. Dominguez, ‘The European Central Bank, the Euro and Global Financial Markets’, 20(4) Journal of Economic Perspectives (2006) p. 67 at p. 73-74.

27 Wilkinson, describing the European Central Bank’s priority of price stability, notes at p. 101 that it was ‘effectively constitutionalised, based on Treaty provisions close to unamendable, since amendment would require unanimous consent from all the member states. This made its mandate more resistant to change than many entrenched domestic provisions’.

28 ‘There was an attempt to explain the problems of the southern countries exclusively in terms of their economic policy errors, which was only part of the truth, and probably, not the most important part, because these errors were the result of poor EMU architecture and that was, obviously, everyone’s responsibility’: L. Máximo dos Santos, ‘European Monetary Union: Political Motivation’, in N. da Costa Cabral et al. (eds), The Euro and the Crisis: Perspectives the Eurozone as a Monetary and Budgetary Union (Springer 2017) p. 120.

32 This is the conclusion reached by Nanapoulos and Vergis; see E. Nanapoulos and F. Vergis, ‘The Inherently Undemocratic EU Democracy: Moving Beyond the “Democratic Deficit” Debate’, in The Crisis Behind the Eurocrisis: The Eurocrisis as a Multidimensional Systemic Crisis of the EU (Cambridge University Press 2019).

34 In other words, indicating that the European Central Bank would not reduce the cost of borrowing for pandemic-stricken Italy.

Shielding the Market from the Masses: Economic Liberalism and the European Union
×

Shielding the Market from the Masses: Economic Liberalism and the European Union
×

Shielding the Market from the Masses: Economic Liberalism and the European Union
×
×