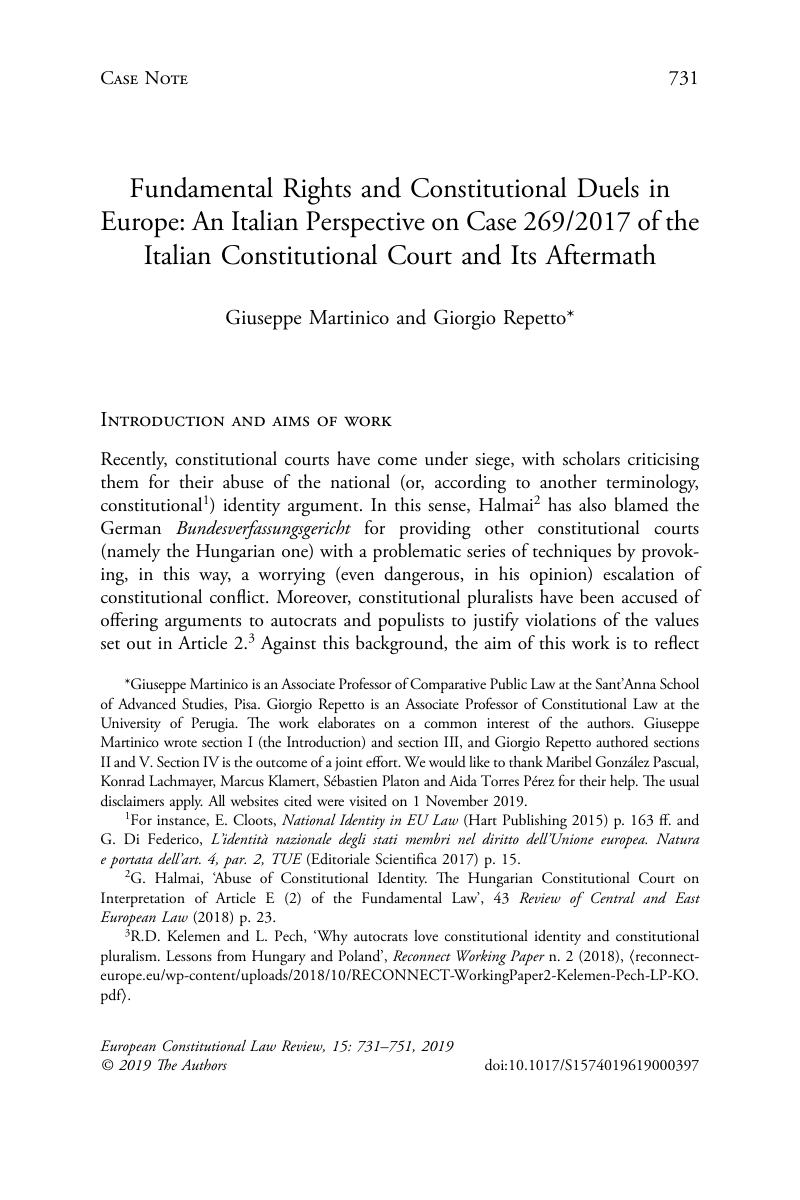 Giuseppe Martinico is an Associate Professor of Comparative Public Law at the Sant’Anna School of Advanced Studies, Pisa. Giorgio Repetto is an Associate Professor of Constitutional Law at the University of Perugia. The work elaborates on a common interest of the authors. Giuseppe Martinico wrote section I (the Introduction) and section III, and Giorgio Repetto authored sections II and V. Section IV is the outcome of a joint effort. We would like to thank Maribel González Pascual, Konrad Lachmayer, Marcus Klamert, Sébastien Platon and Aida Torres Pérez for their help. The usual disclaimers apply. All websites cited were visited on 1 November 2019.

9 The factual background of the ruling concerned the power of an independent authority to impose a financial levy on a certain set of entrepreneurs. The referring judges challenged, among other things, the legitimacy of such provisions in light of Arts. 49 and 56 TFEU covering the freedom of establishment and the freedom to provide services. Although violation of the Charter was thus not at stake, the Italian Constitutional Court took advantage of the opportunity to clarify its new stance with an extensive and highly detailed obiter dictum.

11 Lupo, N., ‘The Advantage of Having the ‘First Word’ in the Composite European Constitution’, 10 Italian Journal of Public Law (2018) p. 186.Google Scholar

26 O. Pollicino and G. Repetto, ‘Not to Be Pushed Aside: The Italian Constitutional Court and the European Court of Justice’, Verfassungsblog, 27 February 2019, ⟨verfassungsblog.de/not-to-be-pushed-aside-the-italian-constitutional-court-and-the-european-court-of-justice/⟩.

31 Art. 11 states that ‘[Italy] agrees, on conditions of equality with other States, to the limitations of sovereignty that may be necessary to a world order ensuring peace and justice among the Nations’, whereas Art. 117(1) reads as follows: ‘Legislative powers shall be vested in the State and the Regions in compliance with the Constitution and with the constraints deriving from EU legislation and international obligations’.

43 See, for instance, Italian Constitutional Court, decision n. 10/1993, whereby the Consulta described the ECHR as an ‘atypical source of law’.

67 Klammert, M., ‘The implementation and application of the Charter of Fundamental Rights of the EU in Austria’, 4 Acta Universitatis Carolinae Iuridica (2018) p. 88 at p. 88.Google Scholar

75 BVerfG 21 March 2018, 1 BvF 1/13, Verbraucherinformation. According to F. Wollenschläger, ‘Die Verbraucherinformation vor dem BVerfG’, 73 JuristenZeitung (2018) p. 980 at p. 985, this decision shows some similarity with the tendency of the Italian Constitutional Court to have the ‘first word’ with regard to the ECJ in fundamental rights cases.

79 As Mayer pointed out: ‘An ultra vires-control of European acts by the German Constitutional Court would only occur in extraordinary circumstances and obvious cases, and apparently a preliminary reference to the ECJ would have to take place first’. F. Mayer, ‘Rashomon in Karlsruhe – A Reflection on Democracy and Identity in the European Union’, Jean Monnet Working Paper, 5 (2010), ⟨jeanmonnetprogram.org/paper/rashomon-in-karlsruhe-a-reflection-on-democracy-and-identity-in-the-european-union/⟩.

87 As Daniel Sarmiento convincingly argued, the shift to Art. 53 represents a vital turning point in the reestablishment of a pluralist setting in fundamental rights protection because ‘[t]his transfer of the centre of gravitation from issues of applicability towards issues of interaction between autonomous legal orders proves that the case law seems willing to assume a pluralist approach to constitutional issues’: Sarmiento, D., ‘Who’s Afraid of the Charter? The Court of Justice, National Courts and the new Framework of Fundamental Rights Protection in Europe’, 50 CML Rev (2013) p. 1267 at p. 1302.Google Scholar

89 von Papp, K., ‘A Federal Question Doctrine for EU Fundamental Rights Law: Making Sense of Articles 51 and 53 of the Charter of Fundamental Rights’, 43 European Law Review (2018) p. 511 at p. 517Google Scholar, stressing that ‘federal question’ does not refer to the enforcement of EU rights by the ECJ ‘but that of securing the existing rights of EU citizens in a multi-layered system of governance’.

92 We see in this a sign of the Italian Constitutional Court’s institutional and interpretative relationality: see Cartabia, M., ‘Of Bridges and Walls: the “Italian Style” of Constitutional Adjudication’, 8 Italian Journal of Public Law (2016) p. 37 at p. 49.Google Scholar

Fundamental Rights and Constitutional Duels in Europe: An Italian Perspective on Case 269/2017 of the Italian Constitutional Court and Its Aftermath
×

Fundamental Rights and Constitutional Duels in Europe: An Italian Perspective on Case 269/2017 of the Italian Constitutional Court and Its Aftermath
×

Fundamental Rights and Constitutional Duels in Europe: An Italian Perspective on Case 269/2017 of the Italian Constitutional Court and Its Aftermath
×
×