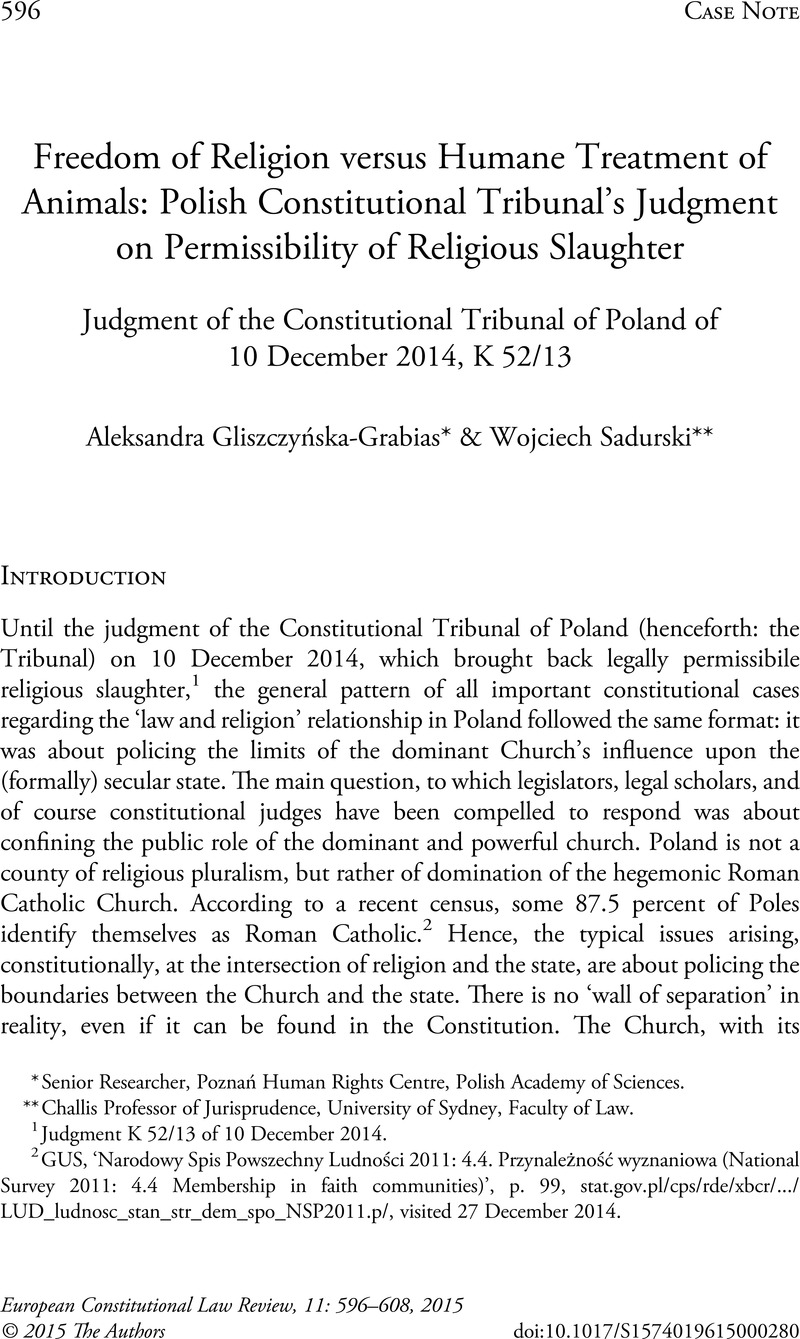 Challis Professor of Jurisprudence, University of Sydney, Faculty of Law.

3 For a discussion of main judgments in this line of cases, see Sadurski, W., Rights Before Courts: A study of constitutional courts in postcommunist states of Central and Eastern Europe, 2nd edn. (Springer 2015) p. 188-193Google Scholar.

4 Constitution of the United States, 1st Am. For a good, classic discussion about the relationship between two religion clauses of the 1st Amendment, see Choper, J., ‘The Religion Clauses of the First Amendment: Reconciling the Conflict’, 41 U. Pitt. L. Rev. (1980) p. 673Google Scholar.

6 See below, under ‘Dissenting opinions’.

7 Under Polish constitutional law, churches and other faith groups have standing to lodge a constitutional challenge (in the ‘abstract’ procedure, hence not limited to ‘constitutional complaint’) against a law which concerns matters relevant to their sphere of activities, see Art. 191 of the Constitution.

8 Art. 53 of the Constitution proclaims, inter alia: ‘(1) Freedom of conscience and religion shall be ensured to everyone. (2) Freedom of religion shall include the freedom to profess or to accept a religion by personal choice as well as to manifest such religion, either individually or collectively, publicly or privately, by worshipping, praying, participating in ceremonies, performing of rites or teaching. Freedom of religion shall also include possession of sanctuaries and other places of worship for the satisfaction of the needs of believers as well as the right of individuals, wherever they may be, to benefit from religious services. … (5) The freedom to publicly express religion may be limited only by means of statute and only where this is necessary for the defence of State security, public order, health, morals or the freedoms and rights of others.’

9 Art. 9 reads: ‘(1) Everyone has the right to freedom of thought, conscience and religion; this right includes freedom to change his religion or belief and freedom, either alone or in community with others and in public or private, to manifest his religion or belief, in worship, teaching, practice and observance. (2) Freedom to manifest one’s religion or beliefs shall be subject only to such limitations as are prescribed by law and are necessary in a democratic society in the interests of public safety, for the protection of public order, health or morals, or for the protection of the rights and freedoms of others.’

11 The Preamble to the Constitutional refers, inter alia, to ‘We, the Polish Nation - all citizens of the Republic, [b]oth those who believe in God as the source of truth, justice, good and beauty, [a]s well as those not sharing such faith but respecting those universal values as arising from other sources … [h]ereby establish this Constitution….’.

12 This point was made emphatically by Judge Wojciech Hermeliński in his dissenting opinion, Part 4.2.

17 A disclosure: one of the co-authors of this case note (W. Sadurski) was a co-signatory of this submission.