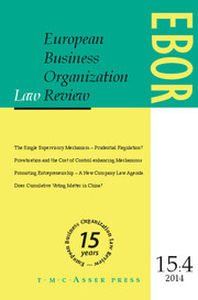 This article addresses the question what will be the impact of the recently admitted choice of corporate law in Europe and how regulators can and should react.

Drawing on the empirical evidence and theoretical insights produced in the abundant debate on charter competition in the United States, this article argues that the European scenario differs significantly from the American one. A look at the most relevant differences and an analysis of European incorporators' incentives leads to the conclusion that no Member State occupies at present, or has proper incentives and political manoeuvring space to assume in the future, a similarly preponderant position like the winner of the historical American competition for corporate charters. Although the individual preferences of decision-makers may motivate some cross-border (re)incorporations, no dominant State of incorporation will emerge in the European Union in the medium term.

Synthesised with the possible restraints Member States can put on corporate law arbitrage, the important conclusion to be drawn from a public policy perspective is that, in the European context, some forces arguably accountable for a socially undesirable pro-managerial tilt in the American market for corporate charters are not present. Thus, the case for remedying centralised legislation is harder to make in the European Union. Some of the prospective and existing harmonisation, even if only providing minimum standards, has to be reassessed from this perspective.