Shigellosis is endemic in most developing countries and thus a known risk in refugees and internally displaced persons. In 2015, a massive influx of refugees into Greece, due to the political crisis in the Middle East, led to the development of appropriate conditions for outbreaks of communicable diseases as shigellosis. We present a cluster of 16 shigellosis cases in refugees, detected by the implementation of a syndromic notification system in one transit centre in Athens, between 20 August and 7 October 2015. Both Shigella flexneri (n = 8) and S. sonnei (n = 8) were identified, distributed in various serotypes. All tested isolates (n = 13) were multidrug resistant; seven were CTX-M-type extended-spectrum β-lactamase producers. Our results indicate lack of a potential common source, although pulsed-field gel electrophoresis typing results revealed small clusters in isolates of the same serotype indicating possible limited person-to-person transmission without identifying secondary community cases related to the refugees. To prevent the spread of shigellosis, empirical antibiotic treatment as well as environmental hygiene measures were implemented. The detection of multi-drug resistance is important for determining the appropriate empirical antibiotic treatment for the more severe cases, while at the same time real-time typing is useful for epidemiological investigation and control measures.

The contemporary political crisis in the Middle East has driven thousands of refugees seeking asylum into Europe, the majority using Greece as the main point of entry. Since the beginning of 2015 more than 900 000 refugees have arrived in Europe by land and sea, four times the total for 2014 [1]. Greece has received the highest number with an estimated 768 916 arrivals by sea as of 10 December 2015 [1]. A recent risk assessment published by the European Centre for Disease Prevention and Control (ECDC), concluded that ‘refugees are vulnerable to infectious diseases because of the specific circumstances under which they live and therefore they require special attention’ [2]. Shigellosis is a known risk in refugees and internally displaced persons [Reference Kjersem3–Reference Benny5]. It is endemic in most developing countries and causes a significant burden with the majority of cases (~70%), and deaths (~60%), occurring in children aged <5 years [6]. Of the four Shigella species S. flexneri is identified as the predominant cause of endemic shigellosis [6].

This report aims to present the epidemiological and microbiological characteristics of shigellosis cases identified in refugees in 2015, the measures taken and the main challenges.

Since 16 August 2015 a transit centre in the Eleonas area of Athens has been hosting refugees arriving from different countries. Most of the refugees stayed for a few days and then travelled to other European countries. A syndromic notification system was implemented at the centre for the enhancement of gastroenteritis surveillance and early detection of clusters or outbreaks, requiring immediate action. A medical care facility was set up and cases were referred to the closest hospital, when necessary.

Between August and October 2015, surveillance of diarrhoea cases in the transit centre population revealed 48 adults with non-bloody diarrhoea who were not further tested for enteropathogens and 16 children (mean age 4·7, s.d. = 3·5 years) with bloody diarrhoea who were hospitalized. The first identified case in children developed symptoms on 20 August 2015 (week 34) and the last on 7 October 2015 (week 41). Shigella spp. was isolated in all of these cases. Thirteen cases came from Afghanistan, one from Iraq, one from Iran and in one case the origin was unknown (Fig. 1). Family members or other people travelling with cases did not report symptoms and no clusters were identified. There were no reported cases of bloody diarrhoea in people staying in containers close to the cases, in staff, members of non-governmental organizations or other people working or visiting the transit centre. In addition, no secondary community cases related to the refugees were identified. It was not possible to identify the source of infection; however, the majority reported symptom onset a few days before arriving in different time points at the transit centre through Turkey. 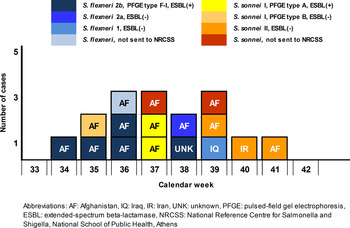 Thirteen Shigella spp. isolates were sent to the National Reference Centre for Salmonella and Shigella (NRCSS). Serotype was determined using the slide agglutination method, according to the World Health Organization Global Foodborne Infections Network standardized protocol and susceptibility testing to 16 different antimicrobial agents was performed by the agar disk diffusion method (Kirby–Bauer) according to the European Committee on Antimicrobial Susceptibility Testing (EUCAST) guidelines and clinical breakpoints. All isolates resistant to cefotaxime and/or ceftazidime were tested for extended-spectrum β-lactamase (ESBL), by the double disk diffusion test, while the presence of the respective β-lactamase genes was tested by PCR amplification [Reference Woodford, Fagan and Ellington7]. Genetic relatedness was determined by XbaI for S. sonnei and NotI for S. flexneri macrorestriction analysis followed by pulsed-field gel electrophoresis (PFGE), according to standard operating procedure proposed by PulseNet PFGE. Similarity and cluster analyses were performed using the Dice coefficient and the unweighted-pair group method with use of average linkage, using Bionumerics software v. 6.0 (Applied Maths, Belgium).

In total, five isolates were serotyped as S. flexneri 2b, one as S. flexneri 2a, one as S. flexneri 1, three as S. sonnei S (I) and three isolates as S. sonnei F (II). Of the 13 isolates tested, seven (five S. flexneri 2b, two S. sonnei I) expressed the ESBL phenotype and the bla CTX-M-group1 gene was identified; they were also non-susceptible to sulfamethoxazole, trimethoprim, tetracycline and streptomycin. The remainder presented a multidrug-resistant (MDR) phenotype (>3 antimicrobial categories), mainly among sulfamethoxazole, trimethoprim, tetracycline, streptomycin and nalidixic acid. According to PFGE results, all five ESBL-producing S. flexneri 2b isolates belonged to the same type with >90% similarity (F-I). The three S. sonnei I were allocated to two PFGE types (S-A and S-B), with the two ESBL-producing isolates belonging to type S-A (Table 1). 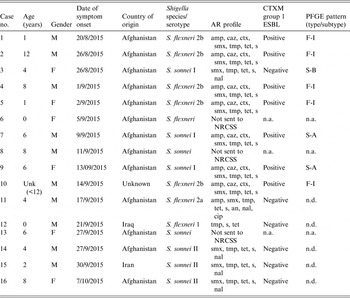 To prevent the spread of shigellosis, the Hellenic Centre for Diseases Control and Prevention (HCDCP) strengthened active surveillance by implementing line-listing and a trawling questionnaire including information about travel history, consumption of food and water, relatives or other travellers with relevant symptoms. At the same time HCDCP arranged the collection and laboratory testing of stool samples from all patients. No additional cases were reported after 7 October 2015. Environmental investigation was conducted, including hygiene conditions in toilets and washing facilities and improvements were introduced. Moreover, water and food samples tested for Shigella spp. and other pathogens were found negative.

All reported bloody diarrhoea cases transferred to paediatric wards had received antibiotic treatment. It was recommended that all future cases with bloody diarrhoea should be treated at the transit centre with azithromycin for children and ciprofloxacin for adults. Family members were specifically advised on hygiene measures, the need for thorough hand washing with soap and water and also the use of antiseptic solution. In parallel, brochures as well as posters translated into Arabic and Urdu with instructions on personal hygiene rules were distributed among the refugees hosted at the centre. Staff and volunteers working at the centre were also made aware of the disease and the necessary hygiene measures while hygiene rules for drinking water, food preparation and waste disposal were ensured.

Identification of shigellosis in refugees was not unexpected since Shigella spp. are a common cause of bacterial diarrhoea in refugees' countries of origin and intermediate stops. Moreover, overcrowding, lack of access to safe food and water, poor personal hygiene and low immunity of moving populations predispose them to communicable diseases, such as shigellosis [Reference von Seidlein8]. The low infectious dose of the disease, as few as 10–100 organisms, facilitates person-to-person transmission [Reference DuPont9].

Among 16 confirmed shigellosis cases, dispersed in time, both species were identified distributed in different serotypes, possibly indicating the lack of a common source. However, small clusters in isolates of the same serotype were observed, indicating possible limited person-to-person transmission (Fig. 1). The mean proportion of Shigella spp.-producing CTX-M-type ESBLs in Greece during the period 2012–2014 was low (6%). However, a high proportion of ESBL-positive isolates (7/12) was detected in refugees in concordance with a recent finding from refugees in Austria [Reference Lederer10]. Additionally, the high rates of antimicrobial resistance to non-β-lactams in all Shigella spp., makes antimicrobial susceptibility testing in such populations of the utmost importance in selecting the appropriate empirical treatment. Providing prompt, effective antibiotic treatment decreases the duration of illness and the person-to-person spread due to hastened elimination of Shigella from the stool [6]. Azithromycin was considered an effective alternative treatment to be used at the transit centre in symptomatic children, since almost all tested isolates were resistant to ampicillin and trimethoprim-sulfamethoxazole while 60% of them were not susceptible to third-generation cephalosporins. Azithromycin is recommended by the American Academy of Paediatrics for the treatment of shigellosis, when required, in children where susceptibility is unknown or an ampicillin- and trimethoprim-sulfamethoxazole-resistant strain is isolated [Reference Pickering, Baker, Kimberlin and Long11]. Active case-finding was challenging, as refugees were staying at the centre for 1 or 2 days on average and communication was difficult, as interpreters could not always be present during investigation. Problems with active case-finding, underdiagnosed cases with mild symptoms or even denial of symptoms by adults to avoid a possible delay in their departure may explain why all identified cases were children.

Several other European countries have reported shigellosis cases in refugees arriving at transit and reception centres [Reference Lederer10, 12]. ECDC just recently conducted a ‘Rapid risk assessment for shigellosis among refugees in the EU’ where the need for timely notification of cases and outbreaks in refugees within the European Union/European Economic Area (EU/EEA) was highlighted [12]. Moreover, typing using both phenotypical and molecular methods (serotyping, antimicrobial susceptibility testing and PFGE) of Shigella spp. isolates is crucial to determine whether the cases are sporadic or not. On the other hand, antimicrobial susceptibility testing helps clinicians choose the appropriate antibiotic treatment for diagnosed cases and, in transit centres, for undiagnosed ones with similar symptoms.

The need for an enhanced European system to track refugees for treatment outcome monitoring, supplemented with molecular-typing data should be emphasized for the timely identification of possible spread of MDR strains. Even though no new cases have been identified since 7 October 2015, enhanced surveillance and laboratory investigation remain in place to assure the early identification of new cases, since Greece is the main point of entry of refugees from Asia in their travel to the final destination in other European countries.

The authors give special thanks to clinicians and microbiologists of the hospitals where cases were hospitalized.