The HPV vaccines have been shown to be effective in preventing HPV infection and HPV related low- and high-grade squamous intraepithelial lesions and cancers among both women and men in western countries [Reference Joura26–Reference Van Damme28], and the nonavalent HPV vaccine have been shown to have significant increased potential impact compared with the quadrivalent vaccine [Reference Capra29, Reference Riethmuller30]. To what extent the vaccine can prevent HPV infection in Chinese men remains unclear. We conducted this cross-sectional study in Taizhou, a relatively rural area located on east coast of China to estimate the prevalence of anal HPV infection and genotype distribution among men of different sexual orientation with or without HIV infection, and to explore potential indicators for the existence of HPV infection.

A cross-sectional study was conducted in Taizhou City, Zhejiang Province from August 2016 to October 2017. Participants were recruited by Taizhou City Center for Disease Control and Prevention (CDC) and three county-level CDCs. Convenient sampling was used to enrol HIV-positive men who were routinely followed-up by the four CDCs and HIV-negative men attending HIV Voluntary Counselling and Testing (VCT) clinics in the same CDCs. A total of 1286 HIV infected men had been routinely followed-up and 473 men had visited the VCT clinics during the study period. This study was approved by the Institutional Review Board of Fudan University (IRB#2016-TYSQ-06-2) and written informed consent was obtained from each participant.

Participants were face-to-face interviewed by trained health staff during the visit, and a questionnaire was used to ascertain epidemiological data. Socio-demographic characteristics including age, level of education, occupation, marital status with women, etc. were collected. Participants were also asked about their behavioural characteristics including sexual orientation, sexual behaviours, tobacco and alcohol use, history of illicit drug use, etc. Ever smoked was defined as having ever smoked more than 100 cigarettes lifetime. Frequency of alcohol drinking in the past year was recorded. Ever used illicit drugs was defined as having ever used any of the following substances: methamphetamine, ecstasy, heroin, marijuana, opium, cocaine, sedatives, ketamine or poppers (amyl nitrites). History of diagnosis of STIs including gonorrhoea, syphilis, chlamydia, condyloma acuminata and genital herpes was reported. Local symptoms of anus and history of haemorrhoids or anal fistula were collected. For HIV-infected participants, the most recent CD4+ T cell count was recorded, which was measured by flow cytometry (Becton, Dickinson and Company, USA) according to the manufacturer's protocol.

HPV genotyping was performed using the HPV GenoArray Test Kit (Hybribio Ltd., Guangdong, China). The test kit detects 21 HPV genotypes using an L1 consensus primer-based polymerase chain reaction assay by the flow-through hybridisation technique with a TC-96/G/H6 HPV DNA Amplification Analyzer and an HMM-2 fast nucleic acid molecule hybridisation instrument. Among the 21 HPV genotypes, 15 are HR-HPV including 16, 18, 31, 33, 35, 39, 45, 51, 52, 53, 56, 58, 59, 66 and 68, and the other six are low-risk HPV (LR-HPV) including 6, 11, 42, 43, 44 and 81. Biotin control, internal control (IC), positive control and negative control from the kit were used in each laboratory test as quality control, and only when both of the biotin control and IC showed coloration, the test was defined as successful and the genotyping results could be read and reported.

Statistical analyses were performed using SAS 9.3 statistical software (SAS Institute Inc., Cary, NC). χ 2 test and Fisher exact test were used to compare the distribution of categorical variables where appropriate. Unconditional simple and multiple logistic regression were used to estimate the odds ratios (OR) and 95% confidence intervals (CI) in comparing prevalence of HPV infection across levels of covariates. A two-sided P-value <0.05 was considered as statistically significant. 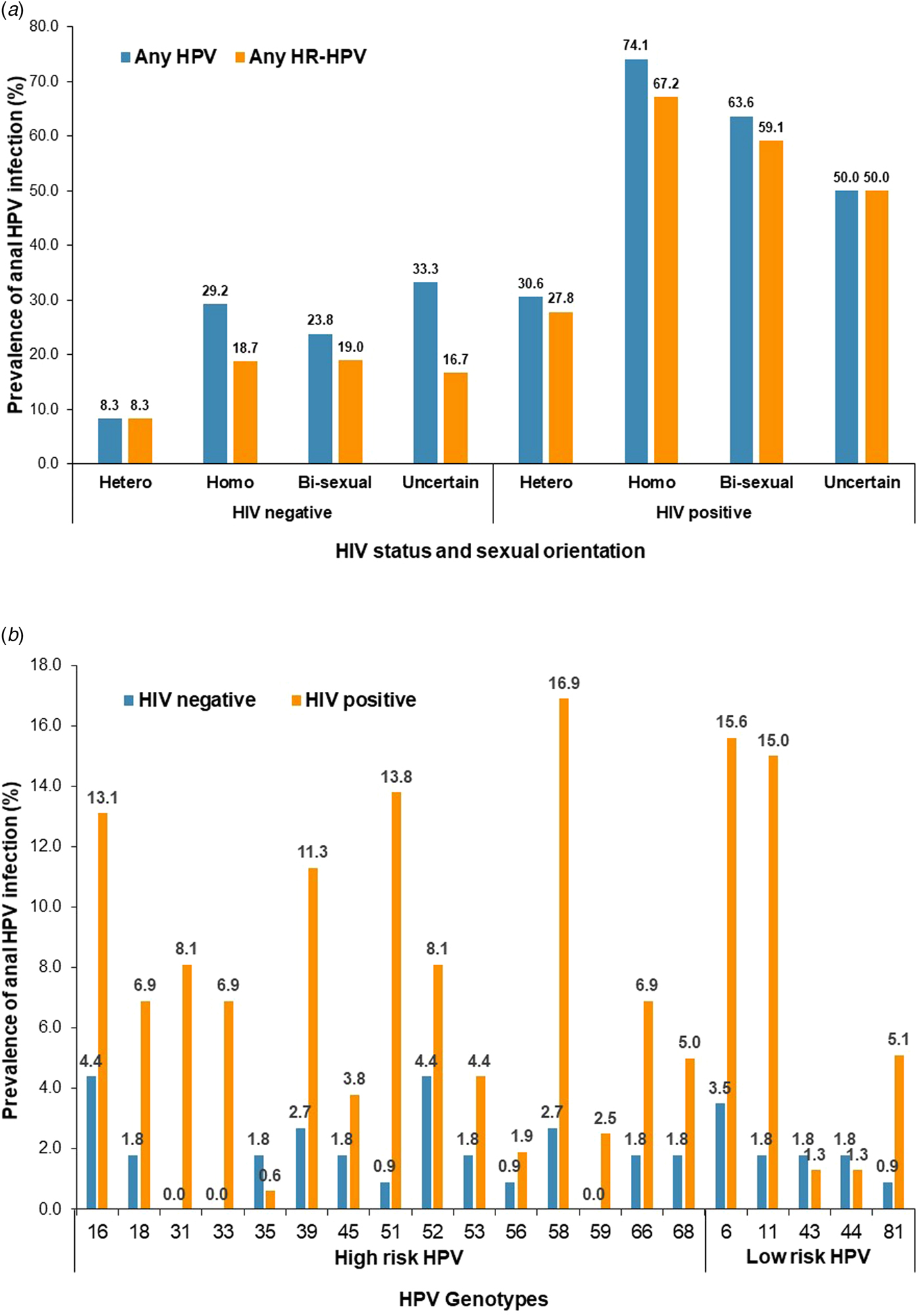 Thirty-seven percent of the HIV-positive participants were infected by two or more than two types of HPV, while the prevalence of multiple infection was 6.2% for HIV-negative men (P < 0.001).

Prevalence of HPV infection by HIV status and sexual orientation

* Confidence intervals with P-value less than 0.05 were shown in bold.

* Confidence intervals with P-value less than 0.05 were shown in bold.

Coverage of the HPV infection by vaccines

In addition to the shared risk factors, other explanations existed for the high correlation between HIV and HPV infection. The lesion caused by HPV infection might facilitate the transmission of HIV, and the immune depression caused by HIV might hamper the ability in clearing HPV infection [Reference Auvert32–Reference Mbulawa34]. However, the association between CD4+ T cell counts and HPV infection remained controversial [Reference Critchlow35–Reference Mooij39]. And our study did not observe a clear link between recent CD4 and HPV prevalence. The cross-sectional nature of the study limited the ability to draw conclusion, thus further prospective studies are needed to clarify the association and understand the natural history of anal HPV infection with or without the impact from HIV infection.

The most prevalent HR-HPV genotypes reported in this study were HPV-58, HPV-51, HPV-16 and HPV-39 for HIV-positive male and HPV-16, HPV-52, HPV-39 and HPV-58 for HIV-negatives. Meanwhile, the LR-HPVs including HPV-6 and HPV-11 which mainly cause genital warts were also highly prevalent in the study population. The spectrum of high-prevalent genotypes was different from those in western countries and had important implication in vaccine development [Reference Machalek9]. For the current vaccines in market, the nine-valet one can cover 31.4% of the infections in this study population, while the quadrivalent one can cover 24.5%. More comprehensive studies on HPV genotype distributions and vaccine effectiveness in Chinese population are warranted.

There were several limitations to the current study. First of all, the selection of the study participants was not random. Thus the reported prevalence might not be representative for all males with high-risk behaviours in Taizhou. Second, the cross-sectional nature of the study limited the conclusions we may draw for the associations observed. Third, the risk behaviours were measured based on self-report, which might lead to information bias. Fourth, although health professionals were trained using a standard protocol, the collection of anal-canal cell samples might not be completely successful, and the test kit for HPV included 21 genotypes, which might together lead to an underestimate of the prevalence.

The authors thank all participants for their contribution to the study.