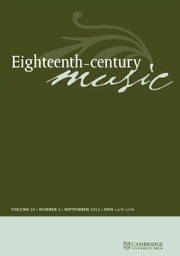 Dorian Bandy is Assistant Professor at McGill University's Schulich School of Music, where he teaches musicology and historical performance. His research interests include Mozart and Beethoven, with a particular emphasis on improvisation and the relationship between composition and performance. Recent publications include articles in Early Music and the Cambridge Opera Journal, and current projects include a monograph on Mozart.

Yonatan Bar-Yoshafat teaches at the Open University of Israel. A Fulbright scholar, Bar-Yoshafat conducted his postdoctoral research at Cornell University. His research interests include eighteenth- and nineteenth-century instrumental music, music theory and analysis, aesthetics and sociology of music, and critical theory. His article ‘On the Musically Melancholic: Temporality and Affects in Western Music History’ has recently appeared in History of European Ideas 47/6 (2021).

Callum Blackmore is a graduate student in historical musicology at Columbia University studying French opera in the long eighteenth century. His dissertation, ‘Opera at the Dawn of Capitalism: Staging Economic Change in France and Its Colonies from Rameau to Cherubini’, explores representations of economic life on the operatic stage in the lead-up to the French and Haitian Revolutions. His work has been published in Current Musicology and Naxos Musicology International and he has presented his research at the annual meeting of the American Musicological Society. His research has been supported by the Barker Fellowship, the M. Elizabeth Bartlet Fund and the Institute for Religion, Culture and Public Life.

Erica Buurman is Director of the Ira F. Brilliant Center for Beethoven Studies and Assistant Professor in the School of Music and Dance at San José State University. Her publications include chapters in the Cambridge Companion to the Eroica Symphony (ed. Nancy November (Cambridge: Cambridge University Press, 2020)) and the forthcoming Beethoven in Context, and her book The Viennese Ballroom in the Age of Beethoven has recently been published (Cambridge: Cambridge University Press, 2022).

Keith Chapin is Senior Lecturer and Director of Performance at the Cardiff University School of Music. He specializes in issues of aesthetics and music theory in France and Germany across the long eighteenth century.

Born in Ireland, Maria Christina Cleary studied psychology at Trinity College Dublin and later harp at the Koninklijk Conservatorium Den Haag and the Koninklijk Conservatorium Brussel. In 2016 she was awarded a PhD by the Academy of Creative and Performing Arts at the Universiteit Leiden. Her doctoral research was carried out in and through artistic practice, and her thesis constitutes the only major study on harp pedalling techniques. She teaches historical harps and historical approaches to music interpretation and performance at the Conservatorio di Musica E. F. Dall'Abaco in Verona and the Haute École de Musique de Genève.

Ivan Ćurković is Assistant Professor at the Sveučilište u Zagrebu Academy of Music, where he is Head of the Musicology Department. He is the author of The Vocal Duets of G. F. Handel and His Italian Contemporaries (1706–1724) (Heidelberg: heiBOOKS, 2017). His research interests include vocal music of the eighteenth century with particular emphasis on the works of Handel, historical and contemporary performance practice, and the application of different cultural theories in historical musicology.

Michael Driscoll is Director of Choirs at Brookline High School in Brookline, Massachusetts, a position he has held since September 2003. At Brookline High School Driscoll directs three choirs, advises four student-directed vocal ensembles and teaches Advanced Placement Music Theory and class piano. He has been Music Director of the Andover Choral Society, based in Andover, Massachusetts, since 2013.

Cristina Fernandes is a full-time researcher at the Instituto de Etnomusicologia – Centro de Estudos em Música e Dança, Universidade Nova de Lisboa. She has taken part in several research projects and has published on various topics related to music and the performing arts in the eighteenth century, such as ceremonial and performance practices at the Portuguese Royal Chapels, patronage and diplomacy, musicians’ professional careers and cultural transfers between Portugal, Spain and Italy.

Angela Fiore received her PhD from the Université de Fribourg in 2015 and is now Researcher in Musicology and the History of Music at the Università di Messina. Her research fields include Neapolitan sacred music, musical activities associated with the House of Este-Modena and the historical soundscapes of early modern cities. For her research she has received grants from the Fondazione Pergolesi Spontini Jesi (2007), the Swiss National Science Foundation (2011), Pôle de recherche-Université de Fribourg (2014) and the American Musicological Society (2017), as well as the Jacques-Handschin-Preis für Musikforschung in 2016. In addition, she holds a diploma in violin, specializing in baroque violin repertory.

Robert O. Gjerdingen was trained at the University of Hawai‘i and then at the University of Pennsylvania under Eugene Narmour, Leonard B. Meyer and Eugene Wolf. Before retiring, he held a number of teaching posts and fellowships, most recently as Professor at the School of Music, Northwestern University.

Stephen M. Kovaciny earned his PhD in music from the University of Wisconsin–Madison in 2019. His dissertation investigated the aesthetic writings of Michel-Paul Guy de Chabanon in relation to Rameau's theory of harmony and early modern auditory culture. His current research examines the ‘origins of music’ as a recurring and persistent narrative from the early-modern era to the present.

Joe Lockwood is a teaching assistant and DPhil candidate at New College Oxford. His Arts and Humanities Research Council-funded research explores the reception of Handel's music in Revolutionary North America. His chapter on the American reception of the composer's music is forthcoming in Annette Landgraf and Helen Coffey, eds, Handel in Context (Cambridge University Press), and his chapter on the equestrian performer Philip Astley, in Michael Burden and Jennifer Thorp, eds, With a Grace Not to Be Captured: Representing the Georgian Theatrical Dancer, 1760–1830 (Turnhout: Brepols, 2021), has recently been published.

Adeline Mueller is Assistant Professor of Music at Mount Holyoke College. Her book Mozart and the Mediation of Childhood (Chicago: University of Chicago Press, 2021) examines Mozart's role in the social and cultural re-evaluation of childhood during the Austrian Enlightenment. She has published articles in Eighteenth-Century Music, Opera Quarterly and Frontiers in Communication, and has contributed chapters to such edited volumes as Mozart in Context (ed. Simon P. Keefe (Cambridge: Cambridge University Press, 2019)) and The Cambridge Companion to ‘The Magic Flute’ (forthcoming, 2022).

Michael Spitzer is Professor of Music at the University of Liverpool and is the author of Metaphor and Musical Thought (Chicago: University of Chicago Press, 2004) and Music as Philosophy: Adorno and Beethoven's Late Style (Bloomington: Indiana University Press, 2006). He has recently published two new monographs. A History of Emotion in Western Music: A Thousand Years from Chant to Pop (New York: Oxford University Press, 2020) is the first history of musical emotion. The Musical Human: A History of Life on Earth (London: Bloomsbury, 2021) is an evolutionary ‘big history’ of music (with audiobook by Daniel Levitin); it has been translated into ten languages and serialized on BBC Radio 4's programme Book of the Week.

Ellen Stokes is a PhD student researching the instrumental manuscripts of Antonio Salieri at the University of Huddersfield, where she is funded by the Steinitz Scholarship in Musicology. She has also been awarded funding by the German History Society for research in Vienna. Previously, she studied at Bangor University, achieving a first-class BMus degree in 2017, and a distinction for her MA in 2018, the latter focusing on the music of Salieri. Ellen is also an accomplished flautist, and her other research interests include folk and traditional Celtic music, and music for film and theatre.

Music historian and violinist Wiebke Thormählen explores music as a social and educational activity at the intersection of domestic and public music-making, with a particular focus on arrangements of large-scale works, domestic devotional music and the engagement with opera in the home. She is co-investigator on the AHRC-funded project ‘Music, Home and Heritage: Sounding the Domestic in Georgian Britain’. Notable publications include the Routledge Companion to Music, Mind and Well-Being: Historical and Scientific Perspectives (2018, co-editor) and Sound Heritage: Making Music Matter in Historic Houses (Routledge, 2021, co-editor), a collection bringing together musicologists, historians, and museum and heritage professionals. As Area Leader in History at the Royal College of Music, London, she investigates the historical and current roles of music-history teaching in higher education.

Beverly Wilcox lectures in music history at California State University–Sacramento, and obtained her PhD from the University of California Davis in 2013. She works on the history of one of the earliest known public-concert organizations, the Paris Concert Spirituel. She has published articles in Revue de musicologie, Grove Music Online and the recent Dictionnaire de l'Opéra de Paris sous l'Ancien Régime (1669–1791), ed. Sylvie Boissou and others (Paris: Garnier, 2019), and is working on her first book.