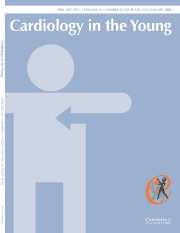 Newsletter of the European Association for Paediatric Cardiology

Recommendations from the Association for European Paediatric Cardiology