Canadian Journal of Philosophy Supplementary Volume, On the Relevance of Metaethics - New Essays on Metaethics 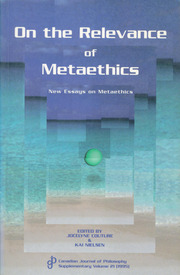