Unilateral cranial nerve palsy of the hypoglossal nerve is an uncommon pathology, which may involve central, canalicular, nerve, or soft-tissue structures. Reference Guarnizo, Glikstein and Torres1 Isolated lesions in the hypoglossal canal are rare, with etiologies including schwannomas, synovial cysts, meningiomas, and juxtaarticular cysts. Reference Guarnizo, Glikstein and Torres1,Reference Weindling, Wood and Hoxworth2 With infranuclear involvement, typical symptoms include ipsilateral deviation of the tongue (toward the side of the lesion) with associated unilateral atrophy and tongue fasciculations. Imaging plays a critical role in the diagnosis of hypoglossal nerve and hypoglossal canal lesions, as biopsy of such lesions is challenging due to difficult access to the nerve and morbidity risk.

This case involved a 64-year-old woman who presented with a 6-month history of dysarthria, dysphagia, and tongue weakness. She developed these symptoms over the course of 48 h, with no further progression of symptoms thereafter. She denied any numbness or paresthesias to the tongue. On exam, she demonstrated objective right-sided unilateral tongue weakness. The tongue was slightly deviated, and was noticeably atrophic on the right, with occasional fasciculations also observed. She was mildly dysarthric, predominantly to lingual phonemes, and she had orolingual dysphagia, with normal pharyngeal swallowing function. The remainder of her exam was unremarkable, and there were no signs or symptoms of other cranial nerve involvement. Computed tomography (CT) revealed an enlargement of her right (ipsilateral) hypoglossal canal, and magnetic resonance imaging (MRI) showed a T2-hyperintense, non-enhancing lesion in the canal. The lesion was not confluent with cervical articular spaces (Figure 1). 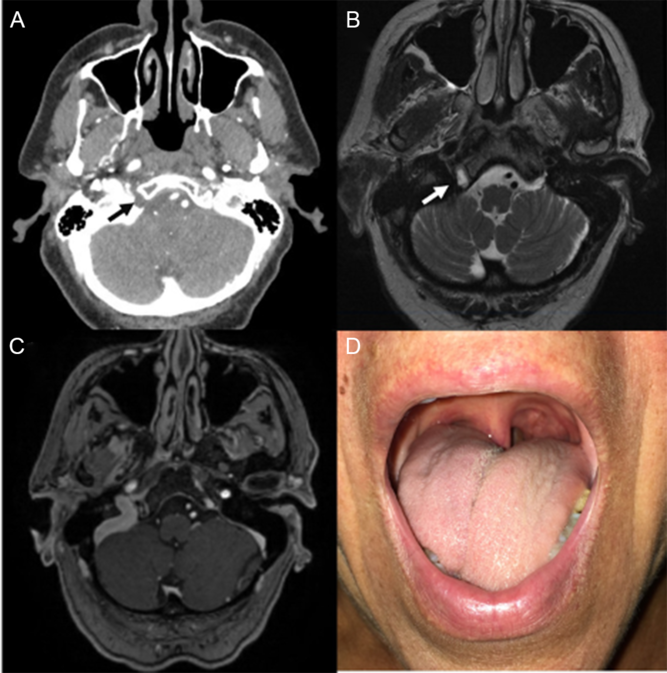 Figure 1: (A) CT imaging revealed a right-sided enlarged hypoglossal canal. (B) A cystic lesion, T2-hyperintense, was found on MRI, and (C) the lesion showed no enhancement. (D) The patient presented with right-sided tongue weakness, deviation, atrophy, and fasciculations.

In this case, the imaging features were not suggestive of a nerve sheath tumor or meningioma, and there was no clear confluence with neighboring articular structures. Despite the obvious clinical manifestations, the working diagnosis was that of a simple synovial cyst. Management was conservative, with speech-language therapy and sequential imaging. In the setting of schwannomas or severely symptomatic lesions, surgery and focal radiotherapy are viable treatment options with high cure rates; however, permanent neurologic sequelae are common. Reference Guarnizo, Glikstein and Torres1,Reference Weindling, Wood and Hoxworth2 A conservative approach, including clinical and imaging follow-up is a reasonable alternative, as lesions of the hypoglossal canal have often been shown to spontaneously regress. Reference Durnford, Harrisson, Ditchfield and Shenouda5 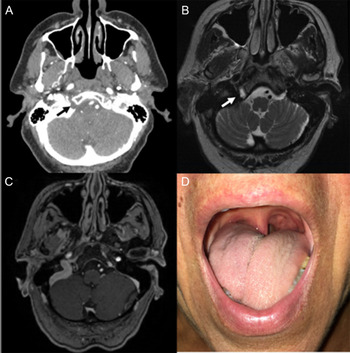 Figure 1: (A) CT imaging revealed a right-sided enlarged hypoglossal canal. (B) A cystic lesion, T2-hyperintense, was found on MRI, and (C) the lesion showed no enhancement. (D) The patient presented with right-sided tongue weakness, deviation, atrophy, and fasciculations.