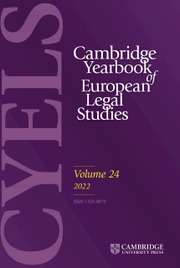 Democracy, Transparency and the Apparent Demise of the Treaty Establishing a Constitution for Europe

The failure of any constitution-making process is deeply disappointing for some and a source of satisfaction for others. The satisfaction of the latter may be short, or at least not long-lived, however, if it subsequently turns out that the changes were necessary, or even demonstrably useful. Initial failure in a constitutional project is relatively common, for reasons that range from the difficulty of the process to the novelty and perceived significance of the issues at stake. Experience suggests, however, that, at least where the rationale for the constitutional proposals was sufficiently soundly based, failure may not be the end of the story. It follows that it makes sense to take stock after such an event: to identify what is lost that was of value; to determine what, if anything, might be improved, if another constitutional moment presents itself; and to consider whether constitutionalisation should be attempted again, or whether other mechanisms can be used instead.

4 For the current status of the treaty in all the Member States see Europa, A Constitution for Europe, avilable at http://europa.eu.int/constitution/ratification_en.htm, viewed 21 April 2006.

7 The theme can be traced back further still: see Douglas-Scott, S Constitutional Law of the European Union (Harlow, Longman, 2002) 142 Google Scholar, drawing attention to the 1993 Inter-Institutional Declaration on Democracy, Transparency and Subsidiarity.

11 Von Bogdandy, A ‘The European Union as a Supranational Federation: A Conceptual Attempt in the Light of the Treaty of Amsterdam’ (2000) 6 Columbia Journal of European Law 27, 44 Google Scholar.

15 The most obvious difference is between federal and non-federal states. Other differences relevant for present purposes include parliamentary procedures for scrutiny of the executive in relation to international affairs, in relation to which see Hofman, H ‘Parliamentary Representation in Europe’s System of Multi-Layer Constitutions: A Case Study of Germany’ (2003) 10 Maastricht Journal 1, 39Google Scholar.

20 Cf the reference to a Europe ‘united in diversity’: European Convention, Draft Treaty Establishing a Constitution for Europe, OJ 2003 C 169/01.

25 Constitution of the Republic of Iraq, approved at referendum on 15 October 2005. At the time of writing (7 April 2006) the Transitional Administration Law is still in operation, pend ing the accession of a government to office: Art 141. Once the government is formed, there is a four-month period within which amendments to the Constitution may be made without resort to the ordinary amending procedure: Art 142. It is possible that attempts will be made to agree changes to the federal provisions of the Constitution during that time.

29 In India, eg, a two-thirds majority in the Rajya Sabha is required before new all-India administrative agencies can be created: Indian Constitution, Art 132.

30 In Australia, eg, alterations to provisions of the national Constitution dealing with the proportionate representation of states in either House of the national Parliament require approval at referendum by majorities in the states concerned and thus, effectively, by majori ties in all states: Constitution of the Commonwealth of Australia, s 128.

33 Austria, Switzerland and South Africa also divide power horizontally, although there are important differences in detail in each case.

39 Kincaid, J ‘Concluding Observations’ in Kincaid, J and Tarr, G (eds), above n 24, at 409, 430Google Scholar. The problem is not confined to common law federations, however, as Kincaid makes clear.

41 Constitution of the Republic of South Africa, s 60-72; Murray, C and Simeon, R ‘From Paper to Practice: The National Council of Provinces after its First Year’ (1999) 14 South African Public Law 96 Google Scholar.

42 Murray, C ‘South Africa’ in LeRoy, K and Saunders, C (eds), above n 34 Google Scholar. The legislatures of the Länder are represented in the Bundesrat of the Austrian legislature as well: Gamper, A ‘Austria’ in Ibid.

57 Conference of the Cantonal Executives: Linder, W and Steffen, I ‘Switzerland’ in LeRoy, K and Saunders, C (eds), above n 34 Google Scholar.

58 Craig, P above n 14, at 26–27, noting that in the circumstances of the contemporary world, if the EU did not exist, arrangements of some other kind between the countries of Europe necessarily would emerge.

60 And would have largely survived in the constitutional treaty for this reason: Norman, P The Accidental Constitution 2nd edn (Brussels, Eurocomment, 2005) 46 Google Scholar.

63 Art 1–5(2). See also (1), in which the Union recognises the equality of the Member States; undertakes to ‘respect their essential State functions’ and guarantees to ensure their territorial integrity.

67 But see Dann, P, above n 32, arguing that the unusual conditions of the European institutional structure make the European Parliament a ‘special case of a working parliament’ in a ‘semi-parliamentary democracy’ and thus more effective than many national parliaments in the areas of responsibility assigned to it.

68 Burgess, M, above n 26, at 228–32, outlining the strategy of Jean Monnet for building Europe, and contrasting it with the proposals for deliberate political development of Altiero Spinelli.

70 Europarl Service, ‘Turnout Trends at European Elections’, available at www.elections2004.eu.int/ep-election/sites/en/results1306/turnout_ep/graphical.html. The 2004 results are the lowest in a progressively declining turnout since the first European elections in 1979, with a turnout of 63%.

71 European Convention, ‘The Role of National Parliaments in the European Architecture’, CONV 67/02, 6. States in the first category included Germany, Denmark and Finland and, with some qualifications, the Netherlands and Austria. Those in the latter category were Belgium, Spain, France, Luxembourg and the United Kingdom.

77 Art I–34; in accordance with the procedure in Art III–396, describing the respective roles of the Parliament and the Council in relation to legislation. See also Norman, P, above n 60, at 397.

82 Art I–22 The President would have been precluded from holding national office during his or her term: Art I–22(3).

85 Art I–27, III–340. These procedures gave some weight to the preferences of the Parliament and thus to the will of the voters. They departed from familiar democratic practice in a vari ety of ways, however: in particular, the Council had the initiative; and a censure motion required special majorities. An additional requirement for members of the Commission to, in effect, represent the Member States in accordance with an agreed system of rotation is broad ly consistent with the practice of some federations: Saunders, C ‘Concluding Observations’ in LeRoy, K and Saunders, C (eds), above n 34 Google Scholar.

88 Further extensions also would have been possible pursuant to procedures put in place by the Treaty: Art I–18, IV–444.

90 According to Norman, the Treaty would have created 26 new legal bases on which decisions would have been made by qualified majorities in the Council and moved another 17 from unanimity to qualified majority voting, leaving ‘about 70 areas’ subject to the unanimity requirement: Norman, P, above n 60, at 319.

91 The limited sanctions available to the Parliament for use against the Commission or individual commissioners are another, despite the improvements that the Treaty would have made in this regard.

94 Lenaerts, K and Desomer, M ‘Towards a Hierarchy of Legal Acts in the European Union? Simplification of Legal Instruments and Procedures’ (2005) 11 European Law Journal 744 CrossRefGoogle Scholar.

97 See the preamble to the Protocol on the Role of National Parliaments in the European Union, available at www.eurotreaties.com/amsterdamtext.html: ‘Recalling that the way in which national Parliaments scrutinise their governments in relation to the activities of the Union is a matter for the particular constitutional organisation and practice of each Member State’.

98 Art I–11(3) and Protocol II Art 4 of the Constitutional Treaty requires, eg, draft European laws to be forwarded by the Commission to national Parliaments at the same time as to the ‘Union legislator’.

100 See, eg, concern in Germany about the authority of the German government to propose German candidates for European judicial positions: ‘[t]his leads to the anomaly that, under the federal constitution, the Bundestag and the Bundesrat have the right to nominate the Judges of the German constitutional court but not the Judges at European courts’: Hofman, H, above n 15, at 52.

Democracy, Transparency and the Apparent Demise of the Treaty Establishing a Constitution for Europe
×

Democracy, Transparency and the Apparent Demise of the Treaty Establishing a Constitution for Europe
×

Democracy, Transparency and the Apparent Demise of the Treaty Establishing a Constitution for Europe
×
×