WHY DO DUTCH AND UK JUDGES CITE FOREIGN LAW? 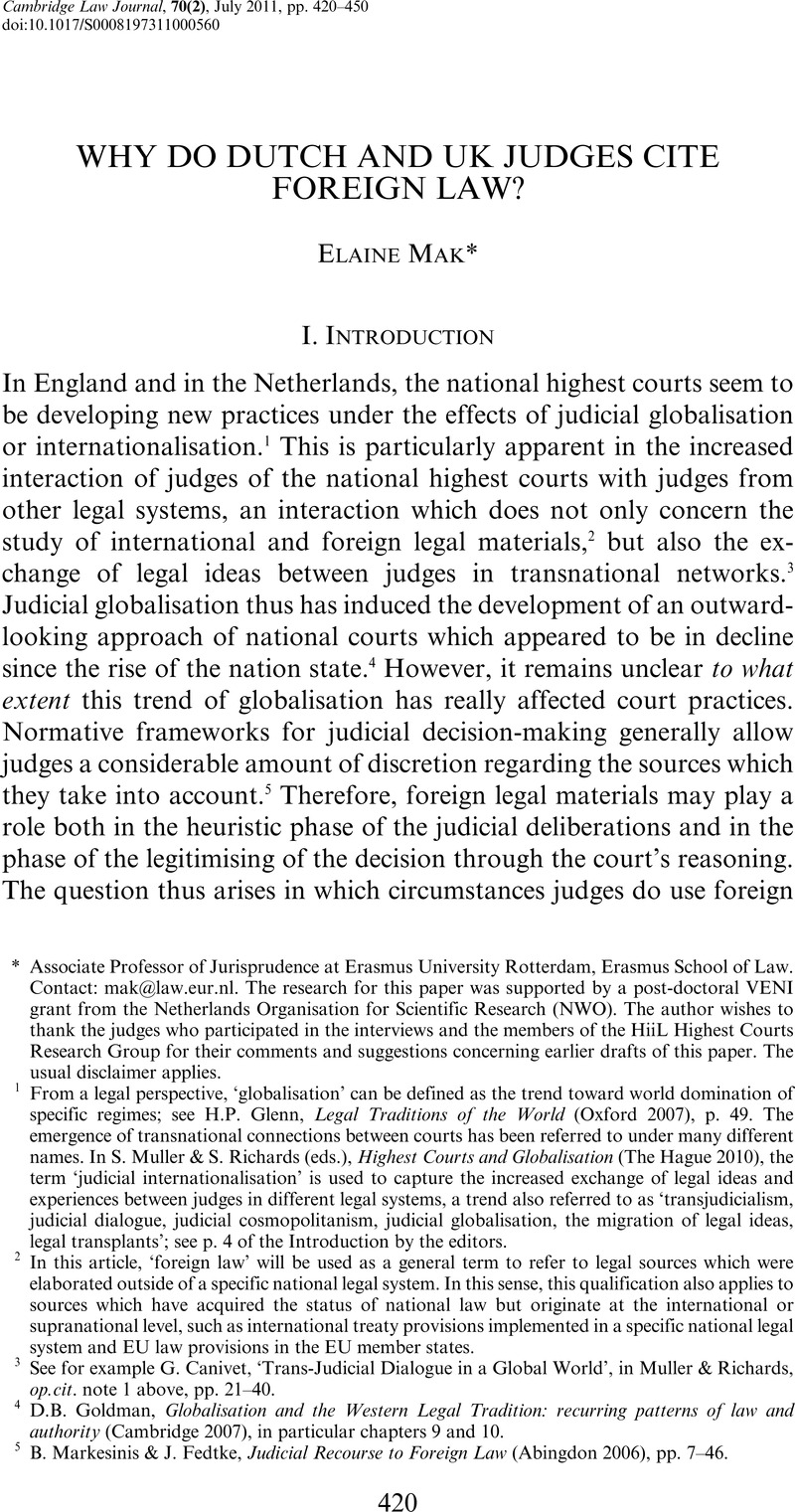 1 From a legal perspective, ‘globalisation’ can be defined as the trend toward world domination of specific regimes; see H.P. Glenn, Legal Traditions of the World (Oxford 2007), p. 49. The emergence of transnational connections between courts has been referred to under many different names. In S. Muller & S. Richards (eds.), Highest Courts and Globalisation (The Hague 2010), the term ‘judicial internationalisation’ is used to capture the increased exchange of legal ideas and experiences between judges in different legal systems, a trend also referred to as ‘transjudicialism, judicial dialogue, judicial cosmopolitanism, judicial globalisation, the migration of legal ideas, legal transplants’; see p. 4 of the Introduction by the editors.

2 In this article, ‘foreign law’ will be used as a general term to refer to legal sources which were elaborated outside of a specific national legal system. In this sense, this qualification also applies to sources which have acquired the status of national law but originate at the international or supranational level, such as international treaty provisions implemented in a specific national legal system and EU law provisions in the EU member states.

4 D.B. Goldman, Globalisation and the Western Legal Tradition: recurring patterns of law and authority (Cambridge 2007), in particular chapters 9 and 10.

7 It is assumed that global influences will most likely be found at this level of judicial decision-making. See Muller & Richards, op.cit. note 1 above.

10 See later in this paragraph.

15 Concerning the function of the Advocate-General, see below, part. II.

20 Much has been written about this reform and its impact on the UK legal system. See inter alia T. Hickman, Public Law after the Human Rights Act (Oxford 2010); A. Kavanagh, Constitutional Review under the UK Human Rights Act (Cambridge 2009).

22 See inter alia Bingham, Lord, ‘The Rule of Law’ [2007] C.L.J. 67CrossRefGoogle Scholar; Lord Phillips, ‘The Rule of Law in a Global Context’, The Qatar Law Forum, 30 May 2009, available at <http://qatarlawforum.com/en/system/files/Lord_Phillips_address_at_Qatar_Law_Forum.pdf>; Lord Phillips, ‘The Supreme Court and Other Constitutional Changes in the UK’, Address to Members of the Royal Court, the Jersey Law Society, and Members of the States of Jersey, 2 May 2008.

24 Hammerstein Committee, Improving Cassation Procedure, Report of the Hammerstein Committee on the Normative Role of the Supreme Court (The Hague, February 2008), available at <http://www.rechtspraak.nl/Organisatie/Hoge-Raad/OverDeHogeRaad/Publicaties/Pages/default.aspx>.

29 Lord Mance, ‘The Common Law and Europe: Differences of Style or Substance and Do They Matter?’, Holdsworth Club Presidential Address, Birmingham, 24 November 2006, available at <http://www.law.bham.ac.uk/documents/Mance-Holdsworth-Address.pdf>.

32 E. de Wet, ‘The Reception Process in the Netherlands and Belgium’, in: H. Keller & A. Stone Sweet (eds.), A Europe of Rights: The Impact of the ECHR on National Legal Systems (Oxford 2008), pp. 229–309. Section 93 of the Constitution states that ‘(p)rovisions of treaties and of resolutions by international institutions which may be binding on all persons by virtue of their contents shall become binding after they have been published’. On the basis of section 94 of the Constitution, ‘(s)tatutory regulations in force within the Kingdom shall not be applicable if such application is in conflict with provisions of treaties that are binding on all persons or of resolutions by international institutions’. The official translation of the Constitution is available at <http://www.rijksoverheid.nl/documenten-en-publicaties/publicaties-pb51/the-constitution-of-the-kingdom-of-the-netherlands-2008.html>.

34 G.J.M. Corstens, speech at the occasion of the opening of the judicial year of the ECtHR, seminar ‘The Convention is yours/La Convention vous appartient’, 29 January 2010, available at <http://www.rechtspraak.nl/Organisatie/Hoge-Raad/OverDeHogeRaad/Publicaties/Pages/default.aspx>.

41 Section 78 of the Judicial Organisation Act.

42 Section 120 of the Dutch Constitution.

45 The introduction of a general mechanism of case selection is part of the proposal of the Hammerstein Committee, note 24 above. A bill based on the recommendations of this committee has been submitted to Parliament; Kamerstukken II 2010/11, 32 576.

46 One of the interviewed Advocates-General suggested that this exception relates to the absence of mandatory legal representation in tax law cases.

47 Section 81 of the Judicial Organisation Act.

51 See for example In Re Sigma Finance Corporation (in administrative receivership) and In Re The Insolvency Act 1986 (Conjoined Appeals) [2009] UKSC 2.

52 A detailed description is given by the Hammerstein Committee, note 24 above, pp. 20 ff.

53 Mitchel Lasser has shown how significant this kind of ‘hidden’ dialogue is for the judicial deliberations. See M. de S.O.l'E. Lasser, Judicial Deliberations: A Comparative Analysis of Judicial Transparency and Legitimacy (Oxford 2004).

75 In cases falling within the scope of the Brussels I Regulation (Council Regulation (EC) 44/2001), these questions will be dealt with under EU law.

76 For a complete overview, see <http://hcch.e-vision.nl/index_en.php?act=conventions.listing>.

86 Her Majesty's Treasury v. Mohammed Jabar Ahmed and others (FC) [2010] UKSC 2, Lord Hope, with whom Lord Walker and Lady Hale agree, at [50]. See also the opinion of Lord Phillips, at [120]–[122], in which two New Zealand cases put forward by counsel for the defendant are analysed.

93 See for example HR 12 October 2010, LJN BN0526, opinion of Advocate-General Jörg, at [90], citing German, French, Swiss and US legal sources which define the scope of the right of non-disclosure.

106 Preambles of the EC Treaty and the EU Treaty, available at <http://eur-lex.europa.eu/en/treaties/index.htm#founding>.

109 See inter alia HR 15 October 1996, NJ 1997, 199, Porsche. Recently, the Court specified its case law in the case of a man who was convicted for the alleged attempt to kill his ex-wife by driving his car into a canal, but who was acquitted for the same offence concerning his daughter whom he himself brought to the shore. HR 29 September 2009, LJN BI4736, see in particular the conclusion of Advocate-General Vellinga, at [12].

112 In practice, judgments of the Supreme Court itself regularly feature as ‘informal precedent’ in later decisions of the Court.

113 Concerning the functioning of such a bifurcated system, see Lasser, note 53 above.

119 E. Mak, ‘Justice at a New Scale: Introducing a Conceptual Framework for the Analysis of Highest Courts’ Role in a Globalised Context', in Muller & Richards (eds.), above note 1, pp. 115–127.

WHY DO DUTCH AND UK JUDGES CITE FOREIGN LAW?
×

WHY DO DUTCH AND UK JUDGES CITE FOREIGN LAW?
×

WHY DO DUTCH AND UK JUDGES CITE FOREIGN LAW?
×
×