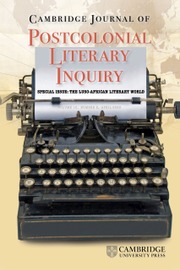 Life Is a Biological Risk: Contagion, Contamination, and Utopia in African Science Fiction

Given the centrality of utopia to the African literary and postcolonial imaginary, science fiction by African writers offers a unique opportunity to explore and critique the sociopolitical salience of imagined African futures. Through a close reading of three short stories in the AfroSF: Science Fiction by African Writers Vol I (2012) anthology, I illustrate how generic science fiction utopias prove to be much too sterile when applied to an African context and thus do not amount to a viable and sustainable future. Making use of tropes of contagion, there is a clear desire to demonstrate that the human impulse is, in many ways, contrary to the objectives of neat utopias and these stories subsequently seek to “contaminate” the notion of utopia itself. Overall, I suggest that this is indicative of a shifting postcolonial landscape that needs to more carefully weigh the price of its utopias.

1 In her 2004 article entitled “Science Fiction in South Africa,” Deirdre Byrne argues that there is a dearth of science fiction, suggesting that huge socioeconomic disparities have led to its general inaccessibility and subsequent unpopularity. “Science Fiction in South Africa” PMLA 119.3 (May, 2004), 522–25. Just more than a decade later, due to globalization and the earlier emergence of transnational literature, the popular fiction scene in Africa has undergone a significant overhaul. Now, science fiction in Africa has a “trendy” appeal, which can be discerned from the international acclaim of authors such as Lauren Beukes and Nnedi Okorafor. There is still, however, controversy about the state of global inclusivity regarding postcolonial output, as was more recently highlighted in the 2015 Hugo Awards. Seeking to safeguard the “entertainment value” of science fiction against rampant affirmative action and leftist political agendas, certain members sought to discredit the process whereby numerous female writers and writers of color are nominated for the award. Hence, although African science fiction has gained traction, the stigma of marginality remains. In addition, there is little critical material on science fiction in Africa but Bould, Mark, ed., Paradoxa: Africa SF (Vashon Island, WA: Paradoxa, 2013)Google Scholar is a comprehensive overview of the field at present.

13 Pendi’s minor concerns, however, belies the confidence in sufficient technological advancement as she confesses that technology has not been sufficiently exploited in South Africa. While standing in the queue, she complains that “you should be able to do all this bureaucratic crap online. But here she is, still shuffling along the rows of plastic chairs with the rest of the sheep who’ve booked their morning off work to get their lives in order,” ibid., 13. Putting this diatribe aside, the narrative is nevertheless determined to imaginatively carry us forward as technology has allowed for utopian reform in Africa.

19 In his novel White Lightning, Justin Cartwright takes a tongue in cheek approach to draw attention to the notion of an “African plague.” The narrator states that people “see a strange and lethal lethargy, whose miasma will spread to consume vineyards, golf courses, schools, roads, hospitals, records offices, and even domestic bees. This may look like lethargy, but it is a natural phenomenon, a virus, that weakens everything it touches and reduces it to its basics. No one, including black people know how to ward off this African plague. . . . This is what they believe in their hearts, that Africa is a plague. It troubles them.” Cartwright, Justin, White Lightning (London: Hodder and Stoughton, 2002), 164 Google Scholar.

28 This point is discussed in further detail in my analysis of Huchu’s “The Sale” further on.

45 This, despite the narrative’s own uncanny resonances between the “identity refugees” and victims of South Africa’s xenophobic violence.

46 South African nationalism has encouraged perceptions of itself as separate from its continental coevals. Consequently, it is not uncommon for South Africans to see themselves as economically, historically, and socially superior to their African counterparts. Ideologically and intellectually, an attitude of exceptionalism is conveyed in the general spurning of intracontinental comparison—difference as opposed to diffusion is a means of appeasing South African fears of the “African” plague.

51 As noted by Lavender, the “yellow peril” has been a common theme in American science fiction, serving to express “rampant paranoia concerning vast Asian hordes invading America existed in the late nineteenth and early twentieth centuries,” Race in American Science Fiction (Indiana: Indiana University Press, 2011), 13. The current sociopolitical circumstances in Africa—and their science fiction output—appear to be no different.

52 Bantustans were either in South Africa or Namibia, but never Zimbabwe.

57 There are numerous other references to the emasculation he suffers under state power. As he is being probed, “The checkout woman chewed gum nonchalantly, watching everything, savouring his humiliation,” ibid., 36. She spoke to him “like one would talking to a toddler,” ibid., 37.

58 Unlike the disparaging representation of Busi as a thief in Lotz’s “Home Affairs,” this narrative is more sensitive to the historically determined stereotypes that surround African masculinity.

82 James also argues that from a narratological perspective, “Utopia may offer no fictional excitement; but the perpetual and unending struggle for a better world offers plenty of plot opportunities,” ibid.

92 In the South African context, the term post-transitional serves to account for the dynamic changes that occur within a national and literary imaginary after discarding the politically laden impetus of the anti-apartheid struggle and the utopian optimism of post-apartheid nation-building. See Frenkel, Ronti and MacKenzie, Craig, “Conceptualizing ‘Post-Transitional’ South African Literature in English,” English Studies in Africa 53.1 (2010), 1–14 CrossRefGoogle Scholar.

Life Is a Biological Risk: Contagion, Contamination, and Utopia in African Science Fiction
×

Life Is a Biological Risk: Contagion, Contamination, and Utopia in African Science Fiction
×

Life Is a Biological Risk: Contagion, Contamination, and Utopia in African Science Fiction
×
×