Phyto-oestrogens are a family of plant-derived xeno-oestrogens that appear to have beneficial effects on human health. To date, no data are available about phyto-oestrogen consumption affecting liver health in a population. The present study aimed to explore the relationship of urinary phyto-oestrogen metabolites with serum liver enzymes in US adults. A nationally representative sample of US adults in the National Health and Nutrition Examination Survey (NHANES) 2003–10 was analysed. The cross-sectional study sample consisted of 6438 adults with data on urinary phyto-oestrogen levels, serum alanine aminotransferase (ALT), aspartate aminotransferase (AST), alkaline phosphatase (ALP) and γ-glutamyl transaminase (GGT) concentrations and data on other potential confounders. Multivariate logistic regression and linear regression were applied to assess associations between urinary phyto-oestrogen levels and ALT, AST, ALP and GGT concentrations. We found a remarkable association between urinary enterolactone and GGT in both adult males (OR 0·37, 95 % CI 0·22, 0·61; P= 0·003) and females (OR 0·37, 95 % CI 0·26, 0·54; P= 0·009). Moreover, elevated enterolactone levels were inversely associated with ALT and AST levels in adult males. However, no association was present between levels of urinary daidzein, O-desmethylangolensin, equol, enterodiol or genistein with liver enzyme levels in this population. The present study results provide epidemiological evidence that urinary enterolactone levels are associated with liver GGT levels in humans. This suggests a potential protective effect of enterolactone on human liver function. However, the underlying mechanisms still need further investigation.

Phyto-oestrogens are present in vegetables, fruits and whole grains, which are consumed daily by humans. In general, phyto-oestrogens can be classified into chalcones, flavonoids (flavones, flavonols, flavanones, isoflavonoids), lignans and stilbenoids according to their chemical structures( Reference Humfrey 1 ). Because of their structural similarity to oestrogen, they can bind to oestrogen receptors (ER)( Reference Younes and Honma 2 , Reference Paterni, Granchi and Katzenellenbogen 3 ). Although the affinities of phyto-oestrogens for ER are low, they can still exert strong biological effects because of their higher levels in serum( Reference Bar-El and Reifen 4 ), having antioxidant, anti-proliferative, anti-mutagenic and anti-angiogenic effects. Previous studies have shown that phyto-oestrogens have beneficial effects in protecting from breast cancer( Reference Bilal, Chowdhury and Davidson 5 ), prostate cancer( Reference Hwang, Kim and Jee 6 ), cardiovascular risk( Reference Frankenfeld 7 ) and metabolic syndrome( Reference Struja, Richard and Linseisen 8 ).

The liver is the organ that metabolises substances such as nutrients, drugs and toxins. It is important in regulating and maintaining homeostasis of carbohydrates, proteins and lipids in the body. It also plays a crucial role in the enterohepatic recycling of several substances such as bile acids, cholesterol and others. Liver aminotransferases – alanine aminotransferase (ALT), aspartate aminotransferase (AST) and alkaline phosphatase (ALP) – are markers commonly used in routine liver function tests as markers of diseases of the liver or bile ducts, as is γ-glutamyl transaminase (GGT). Enzyme levels increase when hepatocytes are damaged under disease conditions such as hepatitis, cholestasis, severe steatosis and others. Whether phyto-oestrogens are associated with liver diseases in humans has not been clarified. Some animal studies suggest that phyto-oestrogens themselves are capable of antioxidant activity and protecting against liver toxicity( Reference Choi and Kim 9 – Reference Fan, Rong and Li 11 ). No epidemiologic studies have directly evaluated the relationship between urinary phyto-oestrogens and levels of liver enzymes.

The National Health and Nutrition Examination Survey (NHANES) studies were conducted by the US National Center for Health Statistics (Centers for Disease Control and Prevention, Atlanta, GA, USA)( 12 ). NHANES studies are cross-sectional studies designed to evaluate the health and nutritional status of a representative sample of the civilian non-institutionalised US population using a complex stratified multi-stage sampling design. In the present study, we investigated the associations between urinary phyto-oestrogens and serum levels of four enzymes (ALT, AST, ALP and GGT) in the US population from the NHANES 2003–10 survey.

Data from the 2003–10 NHANES were used in this study. The data on subjects enrolled in the present study were obtained from four cycles of the NHANES (2003–4, 2005–6, 2007–8 and 2009–10). All data and detailed survey protocols from the website of the National Center for Health Statistics were retrieved. The study was approved by the National Center for Health Statistics Research Ethics Review Board.

To investigate the relationship of phyto-oestrogen exposure to abnormal liver enzyme levels, we used weighted multiple variable logistic regression and presented the associations with OR and 95 % CI. We also examined the distribution of ALT, AST, ALP and GGT levels and performed log transformation to approximate a normal distribution. The associations between urinary phyto-oestrogen level and continuous enzyme levels were assessed using weighted multiple variable linear regression models. We presented multivariate adjusted geometric means and 95 % CI of liver enzyme levels by quartiles of urinary phyto-oestrogens. As sex is an extremely crucial variable, we conducted separate analyses stratified by sex. Diabetes was considered a potential mediator and was examined in separate models with the aforementioned covariates. All multivariate models were performed after adjusting for age, sex, race and ethnicity, education, BMI, cotinine, alcohol consumption, fibre intake and hepatitis B or hepatitis C positivity. Diabetes, BMI and alcohol consumption were not retained in the final models, because adjusting for these variables did not change the results substantially ( < 5 % of change in effect estimates). The lowest quartile (quartile 1) was used as the reference value. In addition, a test for trend of the OR was performed to evaluate the association of elevated liver enzyme levels with phyto-oestrogen exposure and phyto-oestrogen quintiles coded as ordinal variables. Statistical Analysis Systems statistical software package version 9.2 (SAS Institute, Inc.) was performed for all statistical analyses. A P value < 0·05 was designated as the cut-off for statistical significance. 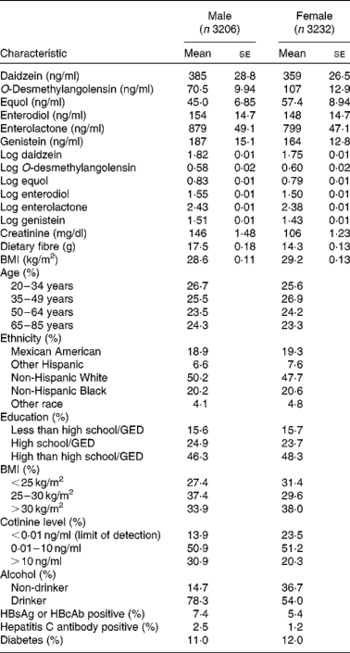 In the multiple variable logistic regression of the association between urinary phyto-oestrogens and liver enzymes after adjustment for several confounders, a higher urinary enterolactone was associated with lower odds for elevated liver enzymes, both in males and in females (Table 3). Compared with those participants with the lowest urinary enterolactone concentration, those with highest concentration had a markedly reduced GGT level in males (OR = 0·37, 95 % CI 0·22, 0·61; P= 0·003) and in females (OR = 0·37, 95 % CI 0·26, 0·54; P= 0·009). Similar associations were observed between the highest urinary enterolactone level with ALT level (OR = 0·40, 95 % CI 0·24, 0·66; P= 0·004) and AST level (OR = 0·58, 95 % CI 0·41, 0·81; P= 0·01) in males. However, none of the other levels of five phyto-oestrogens was associated with liver enzyme levels (online supplementary Table S2).

Hepatitis virus infection may affect liver enzymes because of different degrees of hepatocyte damage. To exclude the possibility of such inference, a total of 484 adults positive for hepatitis B or hepatitis C virus were excluded in the next analysis (Table 4). Consistent with the aforementioned results, the highest urinary enterolactone concentration was still markedly associated with a lower odds of having elevated levels of GGT both in males (OR = 0·32, 95 % CI 0·18, 0·56; P= 0·003) and in females (OR = 0·35, 95 % CI 0·23, 0·52; P= 0·02). Similarly, we found marked associations between the ALT and AST levels in males and ALP level in females. These data suggested that urinary enterolactone per se was associated with liver enzymes despite the presence of hepatitis virus infection.

Only a few rare interventional studies have suggested that a single phyto-oestrogen or phyto-oestrogen mixture supplement might affect liver enzymes in human subjects. However, the results are somewhat conflicting. Engelhardt & Riedl( Reference Engelhardt and Riedl 14 ) found a remarkable increase in GGT levels among men treated with a daily dose of 60 mg of phyto-oestrogen-containing food supplements for 1 year. One randomised controlled trial indicated that GGT decreased, while AST, ALT and ALP were normal among fifty-four healthy post-menopausal women who were administrated isoflavones for 6 months( Reference Barsalani, Riesco and Lavoie 15 ). Conversely, another randomised controlled trial study in healthy post-menopausal women assigned to Pueraria mirifica (a type of plant that contains mixed phyto-oestrogens) for 24 weeks showed no significant difference in liver function( Reference Manonai, Chittacharoen and Udomsubpayakul 16 ). To our knowledge, this is the first epidemiological study to evaluate the association between phyto-oestrogens and liver enzymes using large samples from US NHANES data. The present study results indicated an inverse association between urinary enterolactone and liver enzyme levels.

Although we found an association of urinary phyto-oestrogens, particularly enterolactone, with liver enzyme levels, the mechanism accounting for the association is unclear. Possible mechanisms can be explained by evidence from rodent studies that showed potential hepatoprotective effects of phyto-oestrogens. Fan et al. ( Reference Fan, Rong and Li 11 ) showed that genistein can prevent and protect against oxidative stress-induced liver toxicity by altering the metabolism process and the activity of antioxidant enzymes in male mice. Furthermore, daidzein could exert hepatoprotective effects on female mice by its antioxidant activity in reducing apoptosis in the liver( Reference Choi and Kim 9 ). Similarly, Wong et al. ( Reference Wong, Portmann and Sherwood 29 )showed a marked improvement in oxidant-induced liver injury in male rats after administration of daidzein. Collectively, these data provide evidence that the beneficial effects of phyto-oestrogens on liver might be primarily by activating the antioxidant system. Similar protective mechanisms might be present for enterolactone to protect hepatocytes. However, there is still a lack of experimental evidence.

Undoubtedly, oestrogen is crucial to health in females as well as in males. Nevertheless, different concentrations can result in disparate biological effects. Low oestrogen states are associated with certain hepatic diseases, for example, chronic hepatitis B and C and even cirrhosis. Oestrogen-abundant states are associated with other types of liver abnormalities, such as cholestatic jaundice and benign liver tumours( Reference Lockhat, Katz and Lisbona 30 ). In the past, people commonly used oestrogen replacement therapy in oestrogen deficiency patients( Reference Belchetz 31 ). Evidence indicates that oestrogen may be a vital pathogenic cofactor in development of alcoholic liver injury( Reference Pares, Caballeria and Bruguera 32 – Reference Iimuro, Frankenberg and Arteel 35 ). Oestrogens are also involved in other types of liver disease. Oestrogen leads to damaged mitochondria in acute fatty liver in pregnant women( Reference Grimbert, Fisch and Deschamps 36 ) by reducing β-oxidation of fatty acids and altering the activity of proteins and enzymes in mitochondria.

There are several limitations to the present study. First, although we adjusted for potential confounders, some confounders such as physical activity and genetic susceptibility were not recorded and adjusted for in the analysis. In addition to the common covariants, we analysed other covariants that may influence abnormal liver enzyme levels, such as diabetes, which ensured that the present study results reflected reality. Because the study was cross sectional, it is not possible to know whether phyto-oestrogens affected liver enzymes or vice versa.

In summary, the present study results revealed that enterolactone exposure may be associated with favourable liver health in male and female adults. Future studies are needed to confirm this and explore potential mechanisms.

We thank the many people who have contributed to the NHANES data, including all of the anonymous participants in the study.

The authors' contributions are as follows: Q. L. and C. X. conducted the data analyses; Z.-Y. J. and A. G. were involved in the design of the study and interpretation of the results, and critically reviewed the manuscript. All authors approved the final manuscript.

The authors declare that they have no conflicts of interests to declare.