Prince Cesi and fungi, not to mention fungifunguli

Nicholas Jardine
Affiliation:
Department of History and Philosophy of Science, University of Cambridge 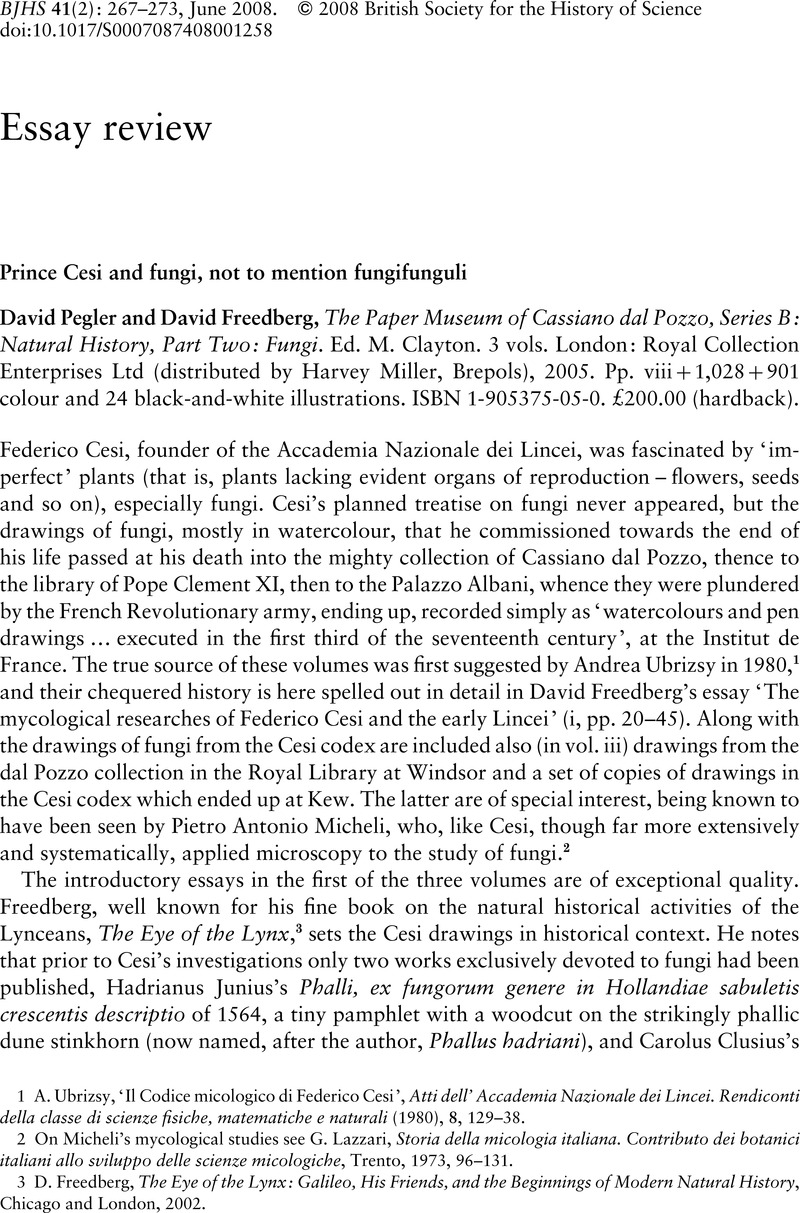 3 D. Freedberg, The Eye of the Lynx: Galileo, His Friends, and the Beginnings of Modern Natural History, Chicago and London, 2002.

6 In this connection Freedberg mentions the dialectical division ‘perfected by Ramus and his followers’. However, unlike them Cesi does not confine himself to dichotomies, and includes quite substantial disquisitions under the various headings and in associated typographical boxes. There was a substantial tradition, dating from well before Ramus, of such more flexible polychotomous Tabulae and Tabellae in printed medical and natural-historical books: see K. J. Höltgen, ‘Synoptische Tabellen in der medizinischen Literatur und die Logik Agricolas und Ramus’, Sudhoffs Archiv (1965), 49, 371–90; S. Ferguson, ‘System and schema: tabulae of the fifteenth to eighteenth centuries’, Princeton University Library Chronicle (1987), 49, 9–30; and I. Maclean, ‘Logical division and visual dichotomies: Ramus in the context of legal and medical writing’, in The Influence of Petrus Ramus (ed. M. Feingold, J. S. Freedman and W. Rother), Basel, 2001, 228–47.

7 On Aristotle's use of division in the pursuit of definitions of parts and functions see P. Pellegrin, Aristotle's Classification of Animals: Biology and the Conceptual Unity of the Aristotelian Corpus, revised ed., trans. A. Preus, Berkeley, CA, 1986 (first published 1982); D. M. Balme, ‘Aristotle's use of division and differentiae’, in Philosophical Issues in Aristotle's Biology (ed. A. Gotthelf and J. G. Lennox), Cambridge, 1987, 69–89. The importance of these authoritative accounts is noted by Freedberg: i, 43, n. 4.

8 Pellegrin, op. cit. (7); Balme, op. cit. (7); S. Atran, Cognitive Foundations of Natural History: Towards an Anthropology of Science, Cambridge, 1990. Long ago George Henry Lewes declared that ‘it is only by bringing together certain general statements, and disregarding the whole context, that a plausible scheme can be drawn up from his works; and so far from his having laid ‘the eternal bases’ upon which moderns have erected their classification, it does not appear that he had ever attempted a special arrangement of the various groups of animals'. G. H. Lewes, Aristotle: A Chapter from the History of Science, London, 1864, 273; added emphases (a passage pointed out to me by Andrew Cunningham).

9 Atran, op. cit. (8). See also B. Berlin, D. Breedlove and P. Raven, ‘General principles of classification and a nomenclature in folk biology’, American Anthropologist (1973), 75, 214–42, and other articles by these authors cited in Atran.

2008. Current Bibliography of the History of Science and Its Cultural Influences, 2008. Isis, Vol. 99, Issue. S1, p. i.
Google Scholar Citations

Prince Cesi and fungi, not to mention fungifunguli
×

Prince Cesi and fungi, not to mention fungifunguli
×

Prince Cesi and fungi, not to mention fungifunguli
×
×