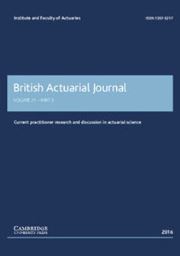 Abstract of the discussion

Mr R. Frankland, F.I.A. (introducing the paper): It was about fifteen months ago that we were asked by the Life Practice Executive Committee to consider whether we could attempt to assess what sort of market movements could be demonstrated to be consistent with a test described as being based on 1 in 200 year events in the context of the ICAS regime.

I am not intending to summarise the paper or its conclusions but did want to make a few remarks about the timing of the paper.

There are those who might feel it appropriate that we should embark upon that work in time to report now, when some commentators believe we are experiencing just such a 1 in 200 year event.

Abstract of the discussion
×

Abstract of the discussion
×

Abstract of the discussion
×
×