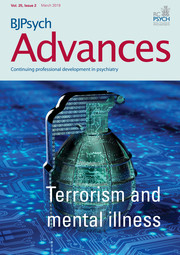 In this issue (pp 101 – 109), authors Cyrus Ho et al discuss the role of psychiatrists in anti-terrorism efforts and the controversies surrounding potential associations between mental illness and terrorism. They review the literature, discuss clinical implications and propose a simplifi ed framework that may be incorporated into clinical practice to screen for potential terrorist tendencies. Cover image: © iStockphoto/ the-lightwriter