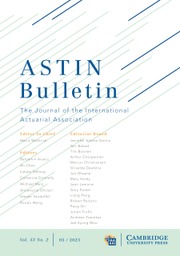 ASTIN Bulletin: The Journal of the IAA

Measurement and Transfer of Catastrophic Risks. A Simulation Analysis

When analyzing catastrophic risk, traditional measures for evaluating risk, such as the probable maximum loss (PML), value at risk (VaR), tail-VaR, and others, can become practically impossible to obtain analytically in certain types of insurance, such as earthquake, and certain types of reinsurance arrangements, specially non-proportional with reinstatements. Given the available information, it can be very difficult for an insurer to measure its risk exposure. The transfer of risk in this type of insurance is usually done through reinsurance schemes combining diverse types of contracts that can greatly reduce the extreme tail of the cedant's loss distribution. This effect can be assessed mathematically. The PML is dei ned in terms of a very extreme quantile. Also, under standard operating conditions, insurers use several “layers” of non proportional reinsurance that may or may not be combined with some type of proportional reinsurance. The resulting reinsurance structures will then be very complicated to analyze and to evaluate their mitigation or transfer effects analytically, so it may be necessary to use alternative approaches, such as Monte Carlo simulation methods. This is what we do in this paper in order to measure the effect of a complex reinsurance treaty on the risk profile of an insurance company. We compute the pure risk premium, PML as well as a host of results: impact on the insured portfolio, risk transfer effect of reinsurance programs, proportion of times reinsurance is exhausted, percentage of years it was necessary to use the contractual reinstatements, etc. Since the estimators of quantiles are known to be biased, we explore the alternative of using an Extreme Value approach to complement the analysis.

Measurement and Transfer of Catastrophic Risks. A Simulation Analysis
×

Measurement and Transfer of Catastrophic Risks. A Simulation Analysis
×

Measurement and Transfer of Catastrophic Risks. A Simulation Analysis
×
×