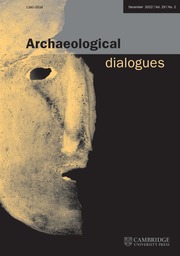 This is an Open Access article, distributed under the terms of the Creative Commons Attribution-NonCommercial-NoDerivatives licence (http://creativecommons.org/licenses/by-nc-nd/4.0/), which permits non-commercial re-use, distribution, and reproduction in any medium, provided the original work is unaltered and is properly cited. The written permission of Cambridge University Press must be obtained for commercial re-use or in order to create a derivative work.
Copyright
© The Author(s), 2020. Published by Cambridge University Press

Michael Blakey presents a principled attack on the resurgence of pseudoscientific racism, which, as he argues, is seeping into the work of the most highly rated, best-regarded authorities of the international scientific community. Blakey attacks, powerfully, the old and clearly debunked idea of races as a biological thing, and points to the structural socio-economic background for its repeated zombie-like return. The paper will probably spark controversy, because it situates this observation in a broad sociopolitical context of overt and hidden racism and the ideological justification of old and current social inequality and injustice. It fiercely criticizes attempts by leading geneticists, most notably David Reich, to reconsider race science as an attempt to roll back the post-war scientific consensus that human races are socially constructed entities, by falsely claiming to pursue an unideological, objective look at what would be ‘biological facts’. Blakey identifies this as part of the larger contradictory, yet interconnected, trends of, on the one hand, claiming to ignore the existence of the social category of race and denying the effects of racism, while, on the other hand, trying to naturalize social inequalities by referring to different, supposedly genetically determined qualities of ‘individuals’, or ‘groups’, which are thinly veiled euphemisms for race. Blakey contextualizes this historically, showing how the invention of modern racism is tightly connected to the emergence of colonialism and capitalism, serving as ideological justification for both systems of exploitation. In a similar manner, the current attempt to explain social differences in educational or economic success and in sociocultural patterns as being grounded in supposed biological differences is a political endeavour, whether or not it is intended by its protagonists, which plays into the hands of those political forces that want to justify and further intensify current levels of inequality (both nationally and globally). This is not a new argument, and Blakey himself has published on these issues before, but in the light of the new importance of genetics in many fields of research, including archaeology, what he has to say is clearly important. I do not want to engage here in detail with all of Blakey’s arguments. Instead, given the theme of this journal and my role as a prehistoric archaeologist, I would like to consider Blakey’s paper in the wider context of interdisciplinarity between geneticists and archaeologists, a context for which Blakey’s more directed attack on the resurgence of pseudoscientific racism is highly relevant. This relevance is, I believe, first of all to be found in Blakey’s fundamental critique of biodeterminism as an ideological mindset with severe political connotations, and second in the notion of scientific objectivity in general. Both issues speak to central points of conflict, or misunderstandings, between geneticists and archaeologists in the newly emerging field of archaeogenetics.

Nevertheless, although Blakey opens his article denouncing the fetishization of DNA in Western science and society, I would like to promote a more positive starting point, acknowledging that genetic research has had a positive impact on prehistoric archaeology in the last few years and arguing that the emerging field of archaeogenetics potentially represents a significant and highly welcome additional source of information for our understanding of prehistory. The somewhat problematic start of the archaeogenetic endeavour is not to be attributed to individual people, nor would I lay blame on a whole discipline. In fact, I would allocate the responsibility for the use of flawed archaeological units to conceptualize and model the simultaneous dynamics of social interaction and biological admixture processes to my own archaeological community. We have failed to sufficiently introduce the theoretical state of the art concerning social-group composition and social interaction into the new archaeogenetic field. So while we have to conclude that there are conceptual problems and misunderstandings between archaeologists and geneticists, we are not talking about a divide between the two fields involved, but rather about a set of conceptual disagreements that are contentious within both disciplines. These debates have to be taken on if we want this emerging field to have positive effects on our understandings of prehistory. And this is where Blakey’s arguments are especially useful. The way most archaeogenetic papers systematically downplay social conditions and human agency as factors in human (pre-)history (Bandelt, Macaulay and Richards Reference Bandelt, Macaulay, Richards, Bellwood and Renfrew2003; Hofmann Reference Hofmann2015) is clearly based, to different degrees, on the biodeterministic illusion Blakey calls out. It is also mostly paired with a positivist belief in objective scientific data, a notion that allows the scientists to claim innocence from all political consequences of their work.

Blakey also puts a finger on the conceptual divide between the supposedly non-ideological facts of nature revealed through objective scientific reasoning (as opposed to the ideology-laden social sciences) – the idea that biological data and categories could be in any way stripped of their underlying political and sociocultural value judgements. It is the idea of a nature–culture divide all over again. If we do not acknowledge that scientific data and categories of inquiry are socially constructed, interdisciplinarity will go nowhere. It seems that decades of theoretical discussions on this in philosophical and archaeological circles have not had much effect on day-to-day archaeological and archaeogenetic practices. Blakey’s very pointed and dense text reminds us with great power of the obvious, yet crucial, fact that categorization, including the creation of scientific categories, is determined by and serves socio-economic and political interests. We cannot claim that what we are doing, as archaeologists or archaeogeneticists, is a neutral, objective laying out of facts, and we should not hesitate to challenge our colleagues who claim to do so. To translate Blakey’s critique of Reich into a European context – which I would like to do because that is the field with which I am more familiar – it should be obvious that in the same way as race is an ideological construct, so too are other categorizations of humans used in European archaeology and in archaeogenetic studies. Here the most critical examples are the essentialization of social identities, like gender stereotypes and ethnicities modelled after modern nation states. The same could be argued for the recurring claims of violence, war and social inequality as inevitable characteristics of human societies, projecting them back into deep prehistory, on shaky empirical foundations. When the narratives connected to the newly found ancient-DNA data reproduce modern Western tropes about ethnic identities, gender relations and the role of war and violence in inter-group relations, we cannot really fall back on the defence that it is something that objectively follows from our neutral reading of the data. All the relevant categories, the populations, cultures, migrations and population replacements, really just reproduce the categories inserted by us and projected back into prehistory. This not only is intellectually lazy, but also prevents us from really gaining new knowledge about the past. This is even more unfortunate, as it is well-established wisdom that the concept of static cultures blatantly misrepresents both the archaeological record (Hofmann Reference Hofmann2015; Vander Linden Reference Vander Linden2016; Furholt 2018; Reference Furholt2019b) and the anthropological knowledge of non-state social organization (e.g. Cameron Reference Cameron2013). Do we really have to, begrudgingly, succumb to acknowledging a prehistory that ‘we may not like’ – because it is filled with violent misogynist hordes from the East, forming biologically defined groups of young males, who bully their way through Europe, killing and raping themselves into our gene pool (perhaps a little unfairly challenging the well-argued piece by Kristiansen et al. Reference Kristiansen, Allentoft, Frei, Iversen, Johannsen, Kroonen, Pospieszny, Price, Rasmussen, Sjögren, Sikora and Willerslev2017, but clearly expressed in its popular adaptation by Barras Reference Barras2019)? Is it not our responsibility to counter such narratives, which reproduce the right-wing’s view of human history as a perpetual clash of cultures? Especially when we actually know that it was us who inserted these ideas into our models in the first place? So it is clearly necessary to rethink our categories if we want to avoid giving ideological ammunition to nefarious political forces, but more fundamentally it is a prerequisite for arriving at any new ideas about the past.

Is it not actually an exciting challenge for the new archaeogenetic project to create models that consider other forms of group organization than the ones known for our own modern world? Would it not be an innovative take to explore the temporal and spatial dynamics of population histories in periods before state borders circumscribed and regulated peoples’ movements and biological admixtures? Blakey’s critique of biodeterminism and the notion of scientific objectivity is not only an invitation to self-reflection, but we should take it as an opportunity to think of ways forward in creating a truly interdisciplinary archaeogenetic research agenda.

Martin Furholt is Professor of Archaeology at the University of Oslo, working on the Neolithic and Bronze Age periods in Europe, focusing on social organization and mobility in prehistoric societies. He is currently conducting fieldwork in Slovakia and Serbia and has been engaged, through several publications, in the debate on the interpretation of the new archaeogenetic data, especially regarding the 3rd millennium B.C.