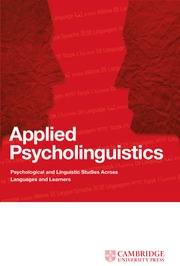 What could possibly be innate? John Morton asked this question in a symposium on psycholinguistics in 1969 (Morton, 1970), and, as this book makes clear, he was certainly not the last to ask it. The Inheritance and Innateness of Grammars is one of the most recent manifestations of our fascination with the question of just what it is that makes it possible for humans – and only humans – to learn language as we know it. The book is the product of a conference that was held at Simon Fraser University in Vancouver in 1993. Nine chapters present work by authors whose expertise includes such topics as speech perception, neurobiology, sign language, language impairment, and, of course, developmental psycholinguistics. Although the word “inheritance” in the title can be understood to refer to genetics, it would have been helpful if the authors had provided their definitions of the term “innateness.” In its primary sense, innate means inborn or present at birth, but clearly no one is arguing that language itself is present at birth, although most would agree that some capacities that may underlie language can be demonstrated in very young infants. Eric Lenneberg provided one definition of innateness in his book, Biological Foundations of Language (1967), which may be what some authors have in mind since his work is frequently referenced: Animals may be thought of as functioning like machines. Their inner structure is not the result of accidental circumstances. The machine unfolds during development, and the internal structure is programmed onto the ontogenetic process. Let us call the internal structure innate mechanisms and the modes of operation that are determined by these mechanisms innate behavior. (p. 220)