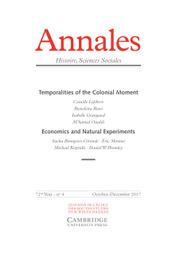 Detours and Contours of Inherited Wealth: The Perennial Structures of Transmission Between Generations*

André Masson proposes replacing Gary Becker’s “theory” of generational altruism with a structural explanation inspired by Marcel Mauss’s famous essay The Gift: Forms and Functions of Exchange in Archaic Societies (1923), which was rooted in indirect reciprocities between three generations. Masson thereby elaborates a gentle critique of the moral principles often lying beneath the analyses of liberal economists (such as the “demonstration effect,” disen-franchisement, or the theory of homo reciprocans). Accepting the ambitions of economic science, Masson nonetheless maintains a conception of the social sciences that is more competitive than cooperative and provides convincing analysis of the economic and social foundations of current intergenerational transfers. The argument developed in this critical note proposes both a historical reading of the ideology of intergenerational equity, which is only conceivable in the transition from the Trente Glorieuses to the Trente Piteuses, and a structural reading arguing that, for the wealthy classes during the European Old Regime, successful transfers of wealth between generations followed the same formal requirements as those in the twenty-first century.

1. Becker, Gary S., A Treatise on the Family (Cambridge: Harvard University Press, 1981)Google Scholar. Becker’s goal was to show that humans were rational about more than just economic matters and that family altruism is in keeping with the sensible calculations of the homo oeconomicus. See Becker, Gary S., “Altruism in the Family and Selfishness in the Market Place,” Economica 48, no. 189 (1981): 1-15 CrossRefGoogle Scholar. Becker is a strong proponent of what one might call “economic imperialism” and is suspicious of the relevance of the other social sciences.

2. On the heuristic interplay between two and three, see Theodore Caplow, Two Against One: Coalitions in Triads (Englewood Cliffs: Prentice-Hall, 1968).

10. On page 162, Masson cites, among others, Ernst Fehr and Simon Gächer, “Fairness and Retaliation,” in The Economics of Reciprocity, Giving and Altruism, ed. Louis-André Gerard-Varet, Serge-Christophe Kolm, and Jean Mercier-Ythier (London: Macmillan, 2000), 153-73. In the ultimatum game, two players must agree on how to divide a given sum of money. A proposes to give B a fraction of the amount, and B can either accept or refuse. If B refuses, neither player gets anything. I will simply make the perhaps ungenerous remark that the players in category A are put in the position of mobsters and players in B in that of mugs, a sociology well known to readers of detective fiction, and that what we find is that most people have trouble recognizing themselves in either of these two categories, at least when they are playing this game.

11. The Trente Glorieuses (The Glorious Thirty) is a frequently used designation for the postwar years between 1945 and 1973 in which the West—and not least of all France—experienced a period of rapid economic and demographic growth. It ended with the oil price shocks in 1973. The term Trente Piteuses (The Piteous Thirty) is sometimes used to designate the period between 1973 and the present (although now it would perhaps be more correct to say the Quarante Piteuses, The Piteous Forty).—Trans.

20. Bourdieu, Jérôme, Postel-Vinay, Gilles, and Suwa-Eisenmann, Akiko, “Pourquoi la richesse ne s’est pas diffusée avec la croissance? Le degré zéro de l’inégalité et son évolution en France 1800-1940,” Histoire et mesure 23, no. 1-2 (2003): 147-98 Google Scholar; Thomas Piketty, Gilles Postel-Vinay, and Jean-Laurent Rosenthal, “Inherited vs Self-Made Wealth: Theory and Evidence from a Rentier Society (Paris 1872-1937),” http://halshs.archives-ouvertes.fr/halshs-00601075/ , April 14, 2010 version, which outlines a second distinction that, in pre-Revolutionary French law, consisted in the fundamental difference between “inherited” and “self-made” wealth. In Pierre de Marivaux’s play Le préjugé vaincu (first performed in 1746 and published in 1747), Dorante, rich and “by all accounts well respected” but a commoner, falls in love with Angélique, the daughter of a marquis, who rejects him because of her aristocratic prejudices. In Scene 7, she overcomes her prejudice by declaring: “Dorante did not make his fortune; he found it already made. Dorante’s family is very good and very distinguished, even if lacking in nobility: it is one of those families that are involved in everything and ally themselves with everyone.” Dorante’s rival, whom Angélique professes to love, is both a baron and a close relative. However she scarcely knows him and he appears to be a caricature of mediocrity.

24. Braun, Rudolf, “‘Staying on Top’: Socio-Cultural Reproduction of European Power Elites,” in Power Elites and State Building, ed. Wolfgang Reinhard (Oxford: Clarendon Press, 1996), 235-59 Google Scholar. This author, writing from a perspective that draws on both Bourdieu and Weber, emphasizes the interplay of constraints that govern social reproduction, which is rarely a calm and settled stream.

26. Castel, Robert, From Manual Workers to Wage Laborers: Transformation of the Social Question, trans. Richard Boyd (New Brunswick: Transaction Publishers, 2003)Google Scholar, a book that emphasizes just how recent and ephemeral the “salaried society” was that is currently crumbling before our eyes. Historians, who know that salaried labor was not common before the eighteenth century (or even afterwards), will not need to refer to the arguments of Vries, Jan de, The Industrious Revolution: Consumer Behavior and the Household Economy, 1650 to the Present (Cambridge: Cambridge University Press, 2008)CrossRefGoogle Scholar, which adopts, from a methodological point of view, the exact opposite approach from Masson’s.

28. Meillassoux, Claude, Mythes et limites de l’anthropologie. Le sang et les mots (Paris: Éd. Page deux, 2001)Google Scholar, 16, writes: “in an unequal society, the concept of the biological (blood-related) family can only be applied in full to the wealthy.” Godelier, Maurice, The Metamorphoses of Kinship, trans. Nora Scott (London: Verso Books, 2011), 85 Google Scholar, writes: “for a peasant without anything to transmit and a lord who has titles, lands, and a glorious genealogy to hand on, kinship can have neither the same meaning nor the same importance.” It is not difficult to find parallels between these analyses and our contemporary society.

This is a translation of: Détours et contours de la rente

Detours and Contours of Inherited Wealth: The Perennial Structures of Transmission Between Generations*
×

Detours and Contours of Inherited Wealth: The Perennial Structures of Transmission Between Generations*
×

Detours and Contours of Inherited Wealth: The Perennial Structures of Transmission Between Generations*
×
×