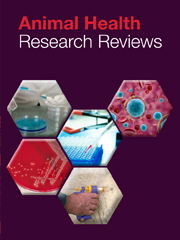 The rise in antimicrobial resistance (AMR) poses a major threat to animal agriculture and human health. To summarize and update current and emerging AMR issues that are significant for animal health and food safety, this issue presents a virtual AMR symposium consisting of seven review papers. These reviews cover a newly described AMR mechanism in Campylobacter, effects of AMR and microbiome on Campylobacter infection, plasmid-mediated colistin resistance in food-producing animals, the impact of point source or antibiotic residues on the environmental resistome, and potential factors influencing horizontal gene transfer in the intestines of food animals. These papers also identify significant knowledge gaps in AMR research and provide new directions for the development of innovative and effective strategies to mitigate AMR in the animal production system.

The widespread use of antimicrobials in both food animals and human beings has heightened concerns about the emergence of antimicrobial resistance (AMR). Unique dynamic interaction between enteric pathogens, animals and people, their gut microbiota (microbiome), sharing the same environment, is considered part of the ‘One Health’ paradigm. A better understanding of the basic science of AMR in animal production systems is critically needed for developing innovative and sustainable approaches to mitigate AMR. In this special issue, a group of scientists from different countries contributes a series of unique AMR review papers.

Campylobacter, a leading foodborne bacterial pathogen, is prevalent in the intestinal tracts of food animals and is frequently exposed to antibiotics used for animal production. Clinical treatment of campylobacteriosis requires the use of a fluoroquinolone (FQ) or macrolide antibiotics, but antibiotic-resistant Campylobacter has been more prevalent recently. Due to the rising resistance, the Centers for Disease Control and Prevention, and World Health Organization have recently identified antibiotic-resistant Campylobacter as a serious AMR threat in the USA. Tang et al. (Reference Tang, Fang, Xu and Zhang2017) briefly reviewed antibiotic resistance trend in Campylobacter and summarized the mechanisms of resistance with emphasis on recently discovered new mechanisms, such as the erm(B) gene conferring macrolide resistance, the cfr(C) genes mediating resistance to florfenicol and other antimicrobials, and a functionally enhanced variant of the multidrug resistance efflux pump CmeABC. As highlighted by Tang et al. (Reference Tang, Fang, Xu and Zhang2017), these emerging AMR mechanisms threaten the usefulness of clinically important antibiotics used for treating human campylobacteriosis. Brooks and Mansfield (Reference Brooks and Mansfield2018) summarized the effects of AMR and microbiome shifts on C. jejuni-mediated diseases; this review paper provides insights into the manipulation of gut microbiome to control C. jejuni in the intestine. Together, innovative strategies are needed to mitigate AMR in Campylobacter, which should be the focus of future research efforts.

Clearly, a hot AMR topic in animal health at present is the emergence of the mobile colistin resistance gene, mcr-1, in Enterobacteriaceae (e.g. E. coli), which has caused a significant public health concern and has drawn worldwide attention. Use of colistin in food animals has been recognized as a major cause for the emergence and transmission of mcr-1. Thus, there is a worldwide trend to limit and even ban colistin usage in animal production. Sun et al. (Reference Sun, Zeng, Li, Laio, Liu and Lin2018) provided an overview of colistin usage and epidemiology of mcr-1 in food animals, and summarized the current status of mechanistic and evolutionary studies of the plasmid-mediated colistin resistance. More importantly, on the basis of published information, Sun et al. (Reference Sun, Zeng, Li, Laio, Liu and Lin2018) discussed several non-colistin usage risk factors that may contribute to the persistence, transmission, and emergence of colistin resistance in animal production system, which include co-selection of mcr-1 with specific clinical antibiotics, factors enhancing horizontal gene transfer (HGT), cross-resistance between colistin and other antimicrobial peptides, and existence of novel colistin resistant genes in ecosystem. Addressing the knowledge gaps identified in this review is imperative to prevent and control transmissible colisitin resistance in animal production in the USA and other countries.

Despite our improved understanding of AMR in terms of epidemiology, molecular mechanisms and evolution in the past decades, there is still a significant knowledge gap regarding the in situ process of HGT, which has been proposed to play a critical role in the transmission of AMR genes in various ecological niches. In particular, it is still largely unknown which factors can significantly influence HGT in the real world, such as the intestinal tract, a melting pot for gene exchange. Zeng and Lin (Reference Zeng and Lin2018) summarized the findings from recent, extensive in vitro studies and identified several factors potentially promoting in vivo HGT in the intestine, such as SOS response, stress hormone, microbiota and microbiota-derived factors. Zeng and Lin (Reference Zeng and Lin2018) highlighted recent mechanistic studies demonstrating that certain antibiotics, such as FQs and beta-lactams, can enhance HGT in the intestine by serving as DNA-damaging, SOS-inducing agents. Thus, further examination of these identified factors using well-controlled animal systems is highly warranted for developing practical and effective strategies to mitigate AMR in an animal production system. Notably, Tamang et al. (Reference Tamang, Sunwoo and Jeon2017) further provided a complementary and in-depth review showing that some antibiotic growth promoters commonly used in livestock could facilitate phage-mediated HGT for the dissemination of virulence genes in zoonotic pathogens, through their functions as SOS response-inducing agents.

In summary, the review papers included in this virtual AMR symposium address significant and timely AMR issues that are significant for animal health and food safety. These papers summarize recent progress in AMR from both basic science and translational innovation perspectives. More importantly, the stimulating discussions in these papers have led to the identification of a panel of significant knowledge gaps in AMR research, which provide new directions for the development of innovative and effective strategies to mitigate AMR in animal production systems.