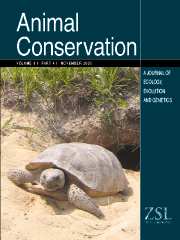 We present results from a study of genetic variation in Utah's cougar population. Estimates were based on data for 50 animals at nine microsatellite loci with five individuals sampled for each of ten management units throughout Utah. Levels of variation were moderate (average genetic diversity across populations was estimated to be 0.4687 for all 50 individuals), and comparable with other large mammals. But this level of variation for the microsatellite loci translated into an inbreeding effective population size of only 571 animals, much lower than the current estimates of census sizes of around 2000-3000. A lack of differentiation among the sampled populations across Utah (average Nem = 6.2) indicates that gene flow occurs over a large area. Since cougars are capable of movement beyond the Utah state borders (and certainly across management units), a better understanding of migration rates and patterns of dispersal will be achieved by sampling a much larger geographic region incorporating much of the western USA. Successful management and conservation of this species will then require a far more integrated approach, involving agencies across a number of states, as opposed to current management practices involving individual units within states.