The “Uniting for Peace” Resolution of the United Nations

An abstract is not available for this content so a preview has been provided. As you have access to this article, a PDF of this content is available in through the ‘Save PDF’ action button. 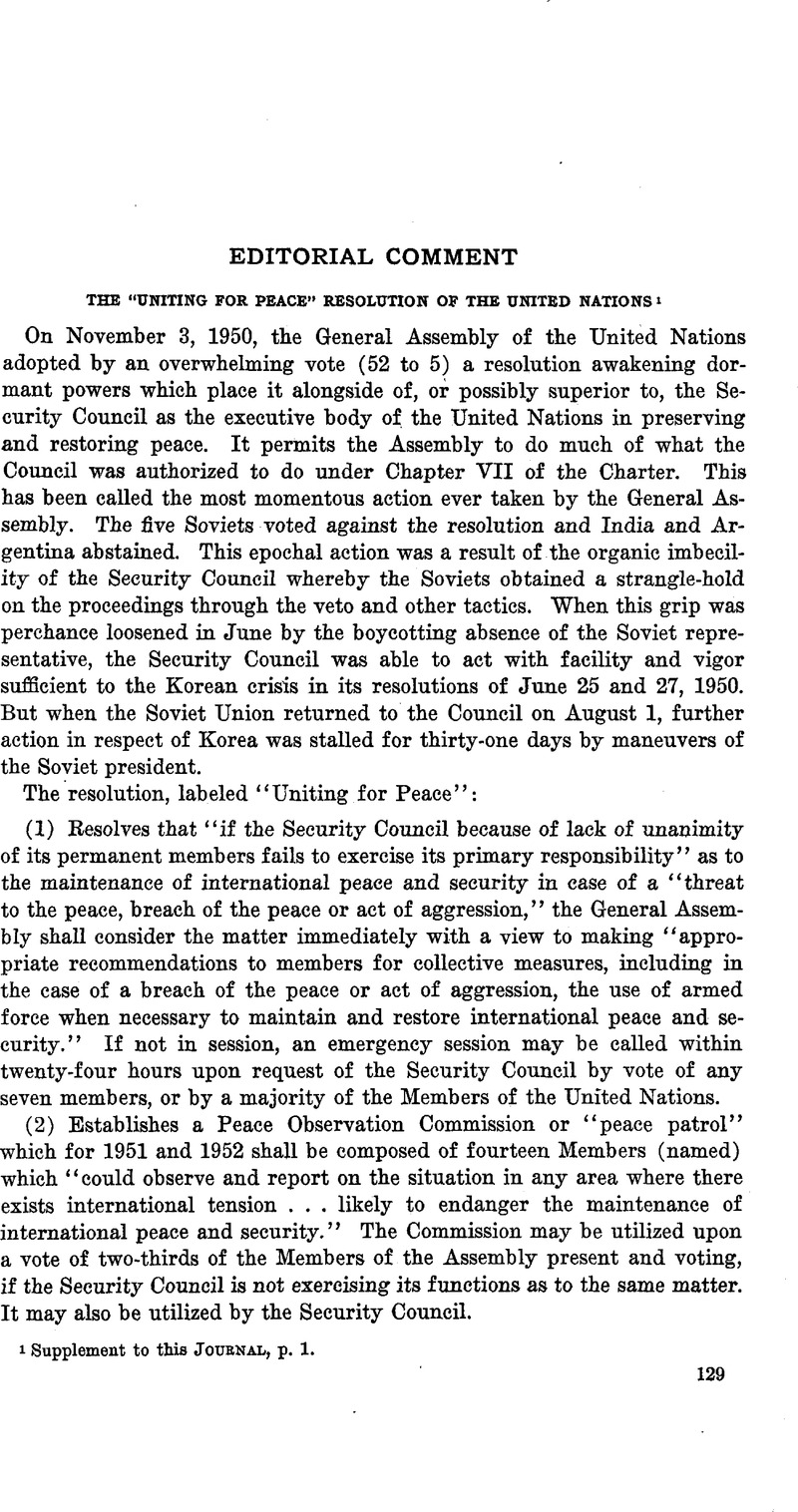 2 On this point Mr. Dulles in the Political and Security Committee stated: “There was no question of binding commitments for the future,” and each Member “would continue to be able to avail itself of all of its armed forces” for use under Article 51. “Since the Security Council had not taken the initiative prescribed by Article 43 the Member States should now be invited to undertake some first steps without awaiting further negotiation attempts in the Security Council.” General Assembly, Fifth Sess., Official Records, First Committee, 354th meeting (U.N.Doc. A/C. 1/SR.354), p. 64.

3 In the Political and Security Committee, Mr. Dulles said the draft resolution involved “no objectives or methods that were not in conformity with the Charter into which new life should be breathed without further delay.” Ibid.

4 Since this was written the proceedings have been briefly as follows : From Nov. 10 to 30 the Council debated two Soviet resolutions in effect condemning the United States as an aggressor, and a resolution sponsored by the United States, United Kingdom and four other countries calling for the withdrawal of the Chinese forces and giving assurance that the interests of Korea’s neighbors would be respected. The Soviet resolutions were snowed under. The other resolution received a vote of 9 to 1, but was finally vetoed on Nov. 30 by the Soviet Union. Thereupon steps were taken to remove the subject of Chinese aggression to the Assembly. There the six-Power resolution in somewhat modified form was introduced, by the several Asian and Arab Powers, instead of supporting it, presented another resolution setting up a committee of three (Iran, India and Canada) to negotiate a cease-fire with the Chinese. This resolution was approved in committee on Dec. 14 by a vote of 52 against 5 of the Soviet bloc, which left the six-Power resolution in abeyance. The sum total of the Soviet votes on these resolutions indicates that Russia is not interested in resisting the progress of hostilities or working out a peaceful settlement.

1 It is not surprising, therefore, that the efforts of the committee to negotiate a truce were bluntly rejected by the Peiping government on Dec. 22, when it declared the only acceptable bases for negotiation were its earlier demands in the Security Council: the withdrawal of all foreign troops from Korea, the removal of the U. S. fleet from Formosan waters, and the admission of Communist China to the U.N. Nevertheless, the committee made another cease-fire proposal, which fortunately was rejected on Jan. 17 with the demand that these conditions be granted first. Thus, even while intensified hostilities by Communist China continued against U.N. forces, 21/2 months have been consumed in fruitless debate and ignominious maneuvers and yet she had not once been declared an aggressor nor requested to retire her troops from Korea. A U. S. resolution of Jan. 20 to this effect was opposed by the Asian-Arab group, which proposed a seven-Power conference with the Chinese on cease-fire and other questions. Finally, the committee on Jan. 30 rejected the Asian-Arab proposal and approved the American resolution by a vote of 44 to 7. It would seem that the Assembly must at least affirm this stand under the “Uniting for Peace” resolution or stultify the Charter and the June resolutions. Anything less will be a moral, if not a dishonorable, defeat.

5 Until the special agreements are negotiated, the great Powers under the Moscow Declaration of October 30, 1943, are to consult together and with other Members with a view to joint action for maintaining peace and security (Article 106). No action appears to have been taken under this article.

7 On June 30, 1950, President Truman told the American people: “We are not at war; the action we have taken is police action.” On Dec. 15 he said: “There is actual warfare in the Par East. ...” On Jan. 4, 1951, he indicated that the nation is not formally at war, but is carrying out an obligation assumed when it signed the Charter. But Congress in the implementing Act (Sec. 6) carefully limited its authorization to the future military agreements with the Security Council.

The “Uniting for Peace” Resolution of the United Nations
×

The “Uniting for Peace” Resolution of the United Nations
×

The “Uniting for Peace” Resolution of the United Nations
×
×