International Criminal Law and the Role of Domestic Courts 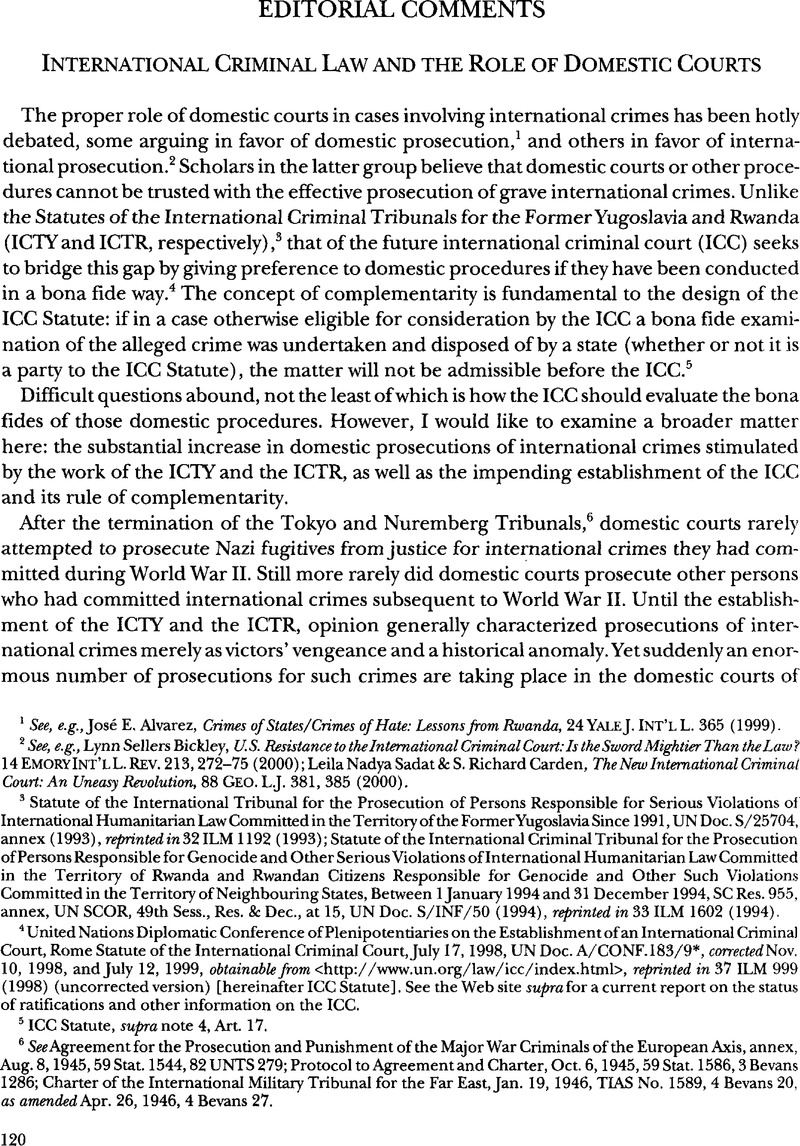 4 United Nations Diplomatic Conference of Plenipotentiaries on the Establishment of an International Criminal Court, Rome Statute of the International Criminal Court July 17,1998, UN Doc. A/CONF.183/9*, corrected Nov. 10, 1998, and July 12, 1999, obtainable from <http://www.un.org/law/icc/index.html>, reprinted in 37 ILM 999 (1998) (uncorrected version) [hereinafter ICC Statute]. See the Website supra for a current report on the status of ratifications and other information on the ICC.

By 1998, the Swiss government had also sent an extradition request to the United Kingdom (UK), and criminal proceedings had begun or were planned in national courts in Belgium, France, Italy, Luxembourg, and Sweden. See Brief Amicus Curiae submitted by Amnesty International—Panel of Judges of the House of Lords, para. 3, obtainable from <http://www.derechos.org/nizkor/chile/juicio/amicus.html>. Prosecutions initiated against Pinochet include Trib. gr. inst., Paris, orders of Nov. 21,1998 (Chanfreau), Nov. 12,1998 (Banquet & Klein), Dec. 10,1998 (Enrique Ropert Contreras & Père Jarlan), summarized in 93 AJIL at 696; Trib. 1st inst., Brussels (investigating magistrate), Nov. 8, 1998, summarized in 93 AJIL at 700. See also Regina v. Secretary of State for the Home Department, ex Parte Belgium; Regina v. Secretary of State for the Home Department, ex Parte Amnesty International Ltd., Nos. CO/236/2000, CO/238/2000 (Q.B., Feb. 15, 2000) (on challenges to the UK home secretary’s decision not to extradite Pinochet to Spain on the ground that he is unfit for trial and referencing other requests for extradition by France, Belgium, and Switzerland). English court decisions are available in LEXIS, Legal (excluding U.S.), United Kingdom, Case Law File. For the letters from the Home Office to the Spanish, Belgian, Swiss, and French Ambassadors announcing the termination of extradition proceedings (Mar. 2, 2000), see The Pinochet Papers, supra, at 465 (Spain), 477 (Belgium), 478 (Switzerland), 479 (France).

On Cambodia, see Identical Letters Dated 21 January 1999 from the Permanent Representative of Cambodia to die United Nations Addressed to the Secretary-General and die President of the Security Council, UN Doc. A/53/801-S/1999/67 (1999); Mydans, Seth, Of Top Khmer Rouge, Only One Awaits Judgment, N.Y. Times, Mar. 14, 1999, §1, at 6 Google Scholar; Becker, Elizabeth, U.N. Panel Wants International Trial for Khmer Rouge, N.Y. Times, Mar. 2, 1999, at Al Google Scholar. In UN Security Council Resolution 1315, the UN Secretary-General was requested to negotiate with the government of Sierra Leone to establish a special court for international crimes committed in that country. SC Res. 1315 (Aug. 14, 2000), obtainable from <http://www.un.org/documents>. The Report of the Secretary-General on the Establishment of a Special Court for Sierra Leone, UN Doc. S/2000/915 (Oct. 4, 2000), obtainable from id., is before the Security Council pursuant to Resolution 1315. See also Crossette, Barbara, Sierra Leone Will Be Site of Tribunal on Atrocities, N.Y. Times, Oct. 6, 2000, at A12 Google Scholar; Crossette, Barbara, U.N. to Establish a War Crimes Panel to Hear Sierra Leone Atrocity Cases, N.Y. Times, Aug. 15, 2000, at A6 Google Scholar.

Similar developments are taking place in East Timor. The High Commissioner of Human Rights of the Commission on Human Rights, in “Question of Violations of Human Rights and Fundamental Freedoms in Any Part of the World,” reported that the UN Transitional Administration in East Timor recommended a variety of options, all based on the establishment of domestic courts with jurisdiction over international crimes committed in East Timor. UN Doc. E/CN.4/2000/27, para. 25 (Mar. 29, 2000), Obtainable from <http:/www.unchr.ch>. This report also stated that nongovernmental organizations that were consulted recommended the establishment of an international tribunal for these crimes. Id., para. 30; see Inbaraj, Sonny, Rights—East Timor: Pressure for International Tribunal Grows, Inter Press Serv., Jan. 26, 2000, available in LEXIS, News, CurnwsGoogle Scholar.

13 These documents and judgments are available online at the ICTY and ICTR Web sites <http://www.un.org/icty/index.html> and <http://www.ictr.org/>, respectively.

16 This rationale closely follows the arguments made in support of subsidiarity within the context of the European Union. See, e.g., Bermann, George A., Taking Subsidiarity Seriously: Federalism in the European Community and the United States, 94 Colum. L. Rev. 331 (1994)CrossRefGoogle Scholar.

21 For example, the Security Council released the following statement on the subject:

By its resolution 731 [1992], the Council demanded immediate compliance by Libya to the requests made to it by France, the United Kingdom and the United States to cooperate fully in establishing responsibility for the terrorist acts against the two airliners. Acting under Chapter VII of the Charter, the Council by resolutions 748 [1992] and 883 [1992] repeated those demands. Resolution 883 [1993] also required Libya to ensure that the two accused in the bombing of Pan Am flight 103 appeared for trial in the appropriate United Kingdom or United States court.

International Criminal Law and the Role of Domestic Courts
×

International Criminal Law and the Role of Domestic Courts
×

International Criminal Law and the Role of Domestic Courts
×
×