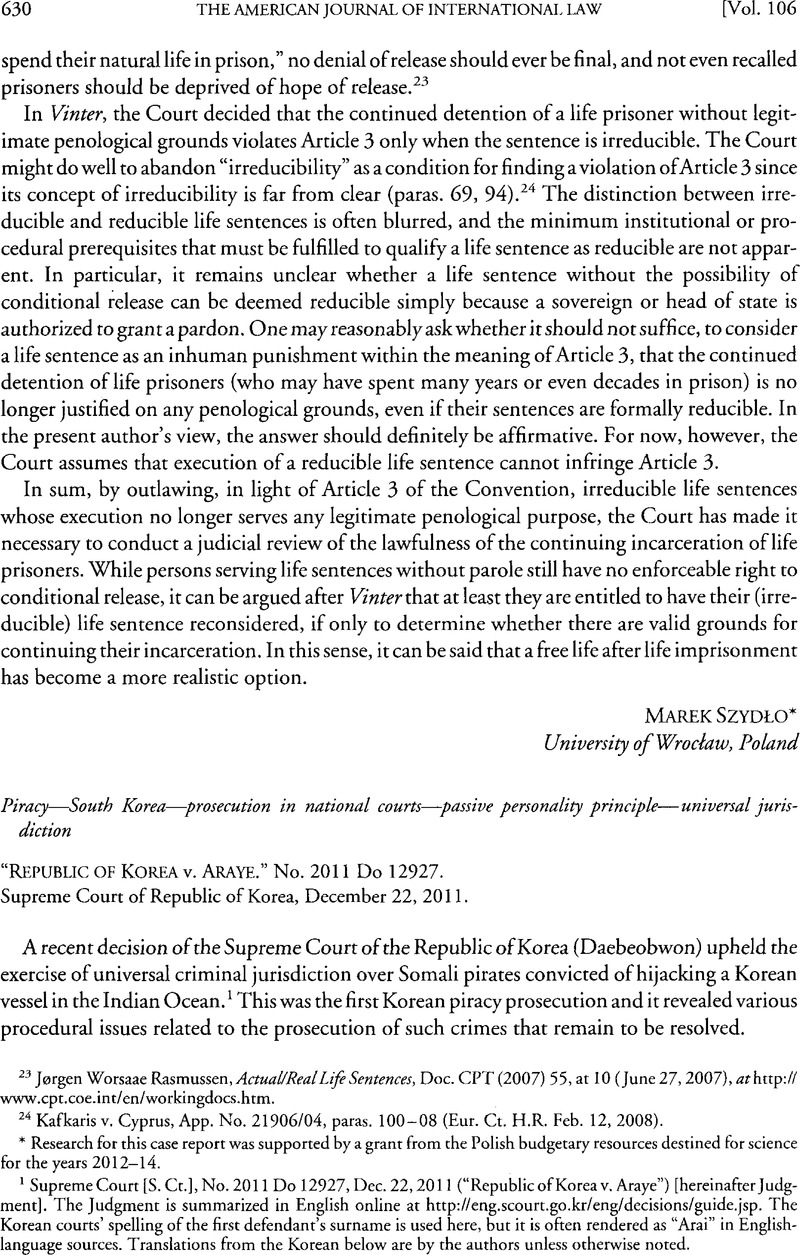 1 Supteme Court [S. Ct.], No. 2011 Do 12927, Dec. 22, 2011 (“Republic of Korea v. Araye”) [hereinafter Judgment]. The Judgment is summarized in English online at http://eng.scoutt.go.kr/eng/decisions/guide.jsp. The Korean courts’ spelling of the first defendant’s surname is used here, but it is often rendered as “Arai” in English-language sources. Translations from the Korean below are by the authors unless otherwise noted.

2 The hijacking occurred about 350 nautical miles southeast of the port of Muscat, Oman, at latitude 22° north, longitude 64° east.

5 Id. For the act, designated here by the shortened translation used in Statutes of the Republic of Korea, see infra note 23.

16 To cure this legal defect, a bill was proposed before the National Assembly, Somalia Haeyeok-eseo-ui Kukgunbudae Hwaldonge Kwanhan Teukryebeoban [Special Act for Military Activities in Somali Waters], Bill No. 1806600, Mar. 3, 2011. This proposed law grants judicial authority to ships’ captains by providing that “regarding acts of piracy in Somali waters, the captain is assigned the role of judicial officer and those appointed by the captain the role of enforcement officer.”

20 Convention for the Suppression of Unlawful Acts Against the Safety of Maritime Navigation, Mar. 10, 1988, 1678 UNTS 222 [hereinafter SUA Convention] (entered into force for Korea Aug. 12, 2003). Korea has yet to adopt the 2005 Protocol amending the SUA Convention.

25 Some domestic statutes implement treaty requirements for “extradite or prosecute” jurisdiction (e.g., Gukjehyungsajaepanso gwanhal beomjoiui chubul deonge gwanhan beobyul [Act on the Punishment of Crimes Within the Jurisdiction of the International Criminal Court], Act No. 8719, Dec. 21, 2007, amended by Act No. 10577, Apr. 12, 2011; and the Act on Punishment for Damaging Ships and Sea Structures, supra note 23).

26 Ministry of Justice, Explanatory Statement for Partial Amendment of the General Provisions of Criminal Law 22 (Apr. 2011) (in Korean).

33 Deportation may be considered, but pardoning those who committed grave offenses prior to deportation raises a policy issue. Releasing them from prison after the completion of their sentences may also cause problems. Reportedly, some of the pirates may desire to settle in Korea, but that may stir popular emotions. Deportation, however, may be a violation of Article 33 of the Convention and Protocol Relating to the Status of Refugees, July 28, 1951, 189 UNTS 150, and Jan. 31, 1967, 19 UST 6223, 606 UNTS 267, respectively, to which Korea is a party.