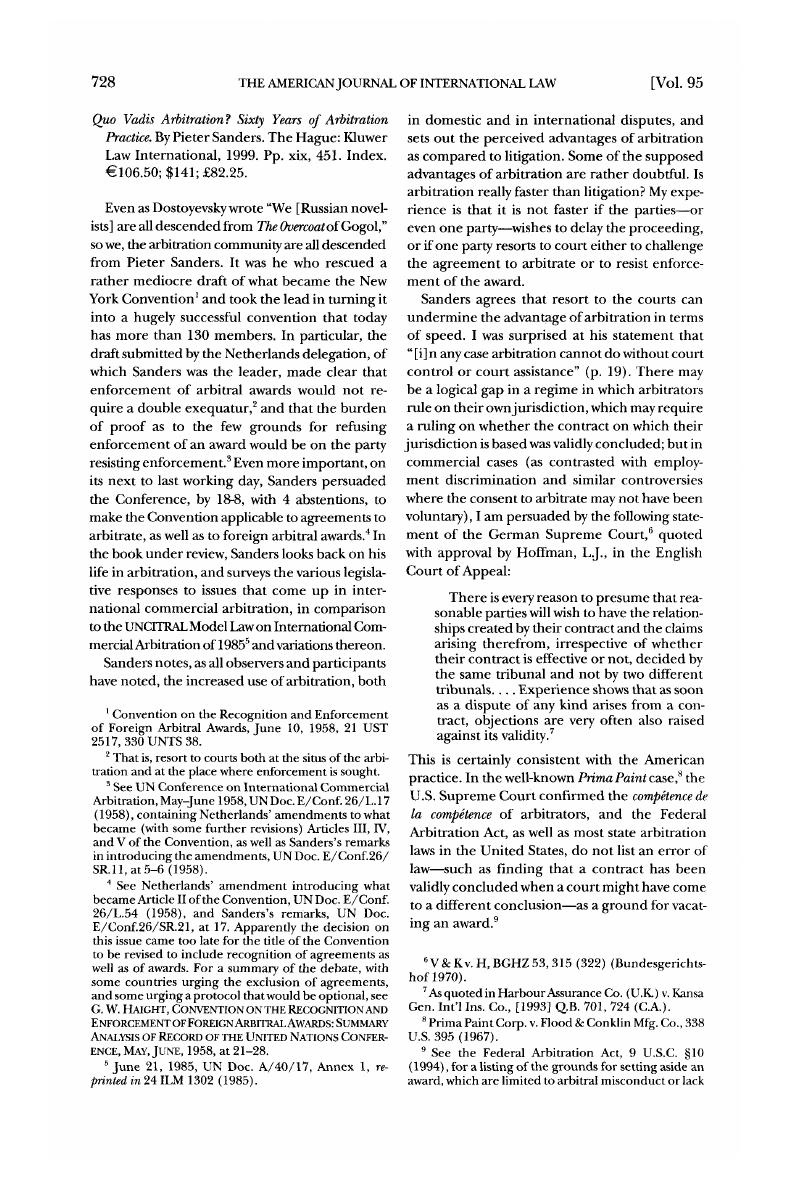 2 That is, resort to courts both at the situs of the arbitration and at the place where enforcement is sought.

4 See Netherlands’ amendment introducing what became Article II of the Convention, UN Doc. E/Conf. 26/L.54 (1958), and Sanders’s remarks, UN Doc. E/Conf.26/SR.21, at 17. Apparently the decision on this issue came too late for the title of the Convention to be revised to include recognition of agreements as well as of awards. For a summary of the debate, with some countries urging the exclusion of agreements, and some urging a protocol that would be optional, see G. W. Haight, Convention on The Recognition and Enforcement of Foreign Arbitral Awards: Summary Analysis of Record of The United Nations Conference, May, June, 1958, at 21-28.

11 Special Issue on the Confidentiality of International Commercial Arbitration, 11 Arb. Int’l 231 (1995), including the complete text of the decision of the High Court of Australia, four expert reports submitted to the trial court, and several articles and case notes on die subject.

13 It is worth noting that WTO decisions, both by panels and by the Appellate Body, are now routinely released and, indeed, posted on the Internet, as are awards of NAFTA and ICSID panels. This is not the case, however, with most private awards.

17 The Chromalloy case involved an arbitration between an American supplier of military training and equipment, and the Egyptian Air Force. The defense to enforcement of the award was that the arbitrators applied the Egyptian civil code, rather than the administrative code, which in effect allowed the government to repudiate contracts freely. That defense had been rejected by the arbitrators (2-1) as essentially contrary to an agreement to submit the contract to international commercial arbitration. For full-length discussion of the issue of foreign enforcement of awards set aside at the situs, see, for example, William, W. Park, Duty and Discretion in International Arbitration, 99 AJIL 805 (1999)Google Scholar, and Hulbert, Richard, Further Observations on Chromalloy: A Contract Misconstrued, a Law Misapplied, and an Opportunity Foregone, 13 ICSID Rev.-Foreign Investment L.J. 124 (1998)Google Scholar.

18 I am not sure where Sanders stands on cross-examination, which he does not discuss. I believe that part of the harmonization of arbitral procedure over the past three decades has been that cross-examination has become the norm, and that European lawyers who initially were not very good at it have learned to cross-examine quite as well as English and American counsel.