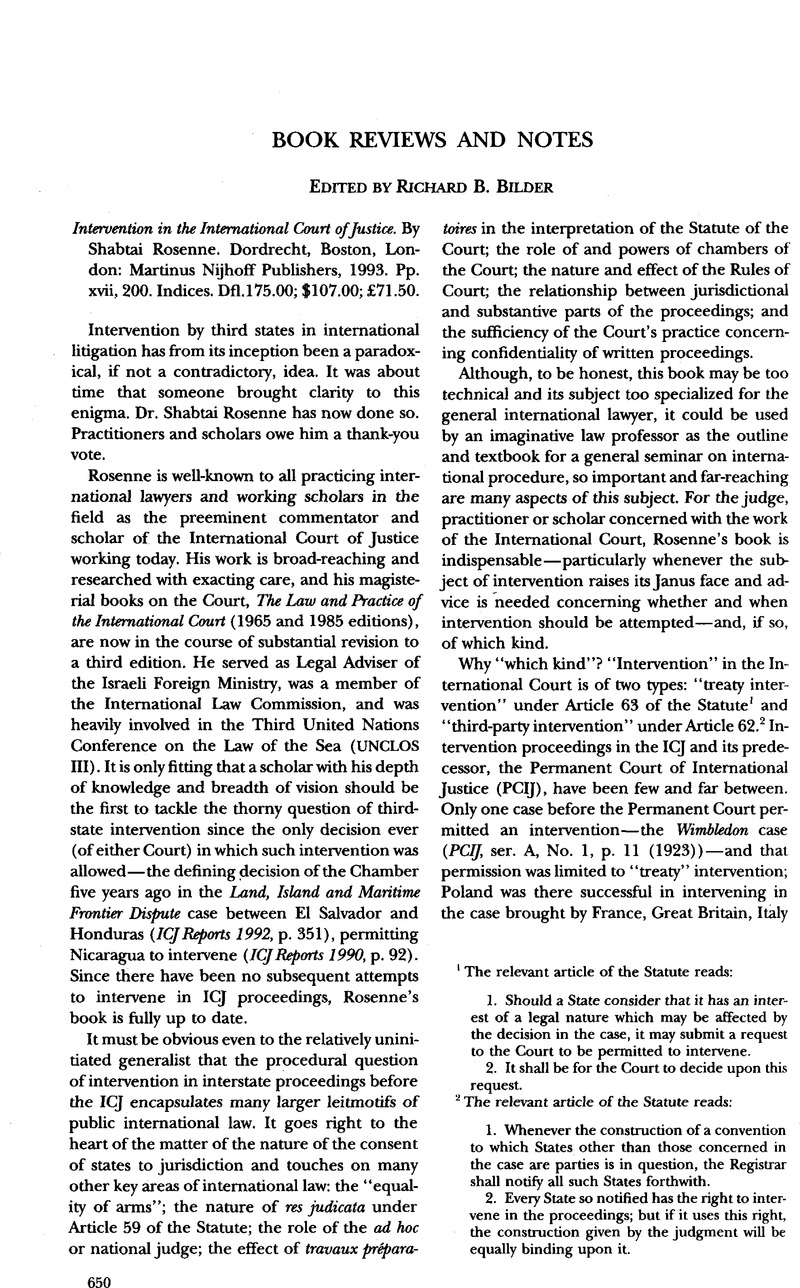 1 The relevant article of the Statute reads:

2 The relevant article of the Statute reads:

The Court, or the President if the Court is not sitting, may at any time decide, after ascertaining the views of the parties, that copies of the pleadings and documents annexed shall be made available to a State entitled to appear before it which has asked to be furnished with such copies.

This is discretionary, and the discretion is usually exercised in favor of retaining confidentiality.

4 “[An application for permission to intervene] shall set out: (a) the interest of a legal nature which the State applying to intervene considers may be affected by the decision in that case ….”

6 “The decision of the Court has no binding force except between the parties and in respect of that particular case.”

7 See Rules of Court, Art. 39 (2): “The notification [of the special agreement] shall also, in so far as this is not already apparent from the agreement, indicate the precise subject of the dispute and identify the parties to it.” The “precise subject of the dispute” is a long way from a precise statement of the claims of the parties to the dispute, and it would be only in considering the impact of those claims that “the interest of a legal nature which [it] considers may be affected by the decision in that case” could be properly indicated.

8 In cases brought by application under Article 38 of the Rules, of course, the claims of the applicant are set forth, and are therefore reproduced and circularized to all entided states by the Registrar—but that is not true of the claims or counterclaims of the respondent.

The Court may at any time direct that the proceedings in two or more cases be joined. It may also direct that the written or oral proceedings, including the calling of witnesses, be in common; or the Court may, without effecting any formal joinder, direct common action in any of these respects.

10 See generally Keith Highet, The Peace Palace Heats Up: The World Court in Business Again?, 85 AJIL 646 (1991) (esp. at 649 n.41). For a little-noticed but extraordinary analysis of the institution of ad hoc chambers, see the lengthy and unusual dissenting opinion of Judge Shahabuddeen appended to the Court’s Order of February 28, 1990, in Land, Island and Maritime Frontier Dispute (1990 ICJ Rep. 3, 18–62). This deserves far greater attention from scholars and commentators than it has received, doubdess because of its being appended to an Order of the Court rather than to a Judgment. But see Elihu Lauterpacht, Aspects of the Administration of International Justice 90–98 (1991).