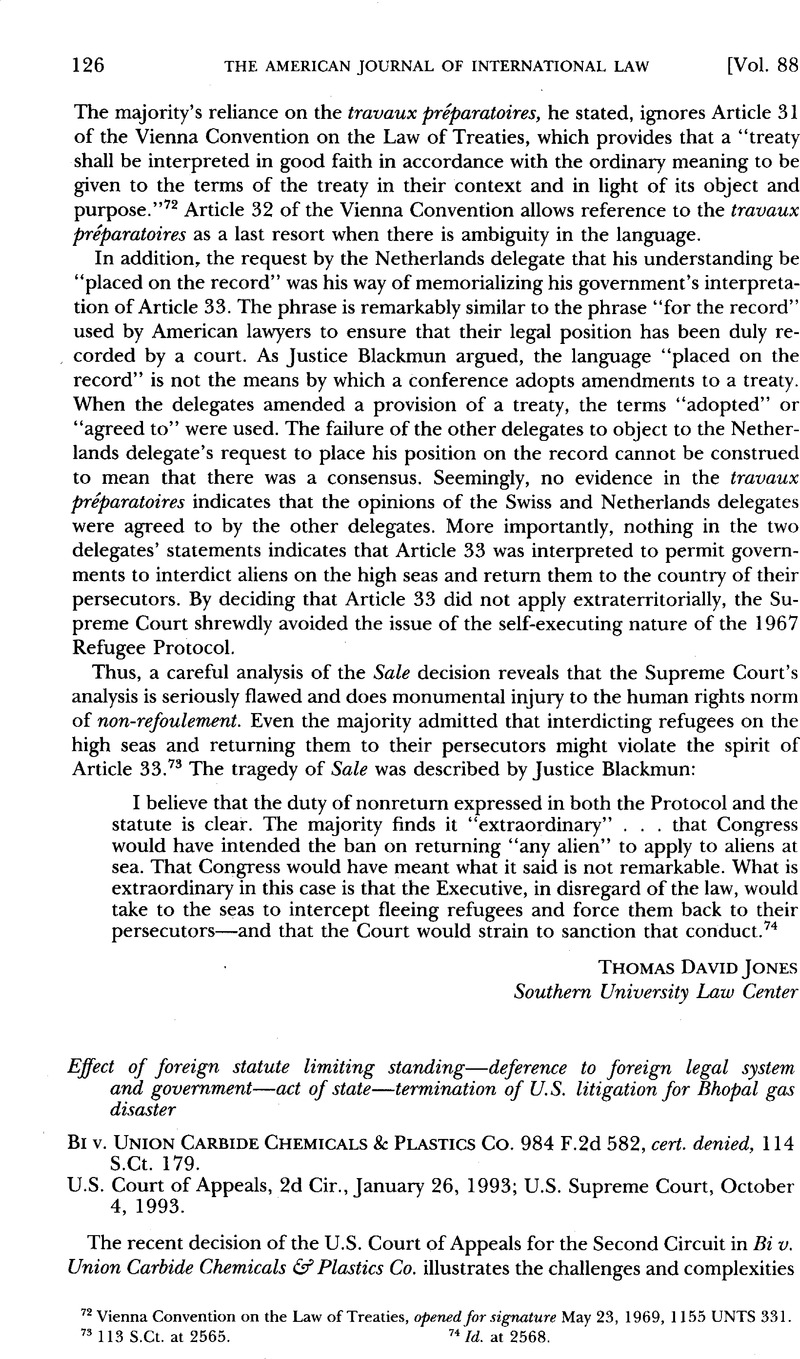 18 By now, India should feel thoroughly scrutinized by U.S. courts. In its forum non conveniens decision of 1986, 634 F.Supp. 842, the Southern District of New York extensively explored the fairness and adequacy of the Indian legal system.

20 See, e.g., The Antelope, 23 U.S. (10 Wheat.) 66, 122 (1825) (“No principle of general law is more universally acknowledged, than the perfect equality of nations. … It results from this equality, that no one can rightfully impose a rule on another. Each legislates for itself, but its legislation can operate on itself alone.”); Restatement (Third), supra note 14, §206; Ian Brownlie, Principles of Public International Law 287 (4th ed. 1990) (“The sovereignty and equality of states represent the basic constitutional doctrine of the law of nations …”); Anne-Marie Burley, Law Among Liberal States: Liberal Internationalism and the Act of State Doctrine, 92 Colum. L. Rev. 1907, 1923–26 (1992) (summarizing authorities on sovereign equality).

22 For a different view that tends to support the Second Circuit’s approach, see Burley, supra note 20.

30 In its 1987 decision, the Second Circuit said many of the discretionary grounds for refusing recognition in New York would not apply. 809 F.2d at 204. Judge Keenan’s 1986 opinion reviewed evidence that India recognizes U.S. judgments in some circumstances. 634 F.Supp. at 852.

32 Joseph Story, Commentaries on the Conflict of Laws 44 (5th rev. ed. 1857) (“There is, then, not only no impropriety in the use of the phrase, ‘comity of nations,’ but it is the most appropriate phrase to express the true foundation and extent of the obligation of the laws of one nation within the territories of another.”).

33 See Hilton v. Guyot, 159 U.S. 113, 163 (1895) (“No law has any effect, of its own force, beyond the limits of the sovereignty from which its authority is derived.”); Restatement (Third), supra note 14, §206 comment b (sovereignty “implies a state’s lawful control over its territory generally to the exclusion of other states, authority to govern in that territory, and authority to apply law there”); Story, supra note 32, at 11, 26, 28 (“This is the natural principle flowing from the equality and independence of nations. For it is an essential attribute of every sovereignty, that it has no admitted superior, and that it gives the supreme law within its own dominions on all subjects appertaining to its sovereignty.” Also, “every nation possesses an exclusive sovereignty and jurisdiction within its own territory.” And “no State or nation can, by its laws, directly affect, or bind property out of its own territory, or bind persons not resident therein”); D. J. Llewelyn Davies, The Influence of Huber’s De Conflictu Legum on English Private International Law, 18 Brit. Y.B. Int’l L. 49, 56 (1937) (the first of Huber’s three maxims was that the “laws of every sovereign authority have force within the boundaries of its state, and bind all subject to it, but not beyond”).

Although the laws of one country can have no direct force in another country, yet nothing could be more inconvenient to the commerce and general intercourse of nations than that transactions valid by the law of one place should be rendered of no effect elsewhere owing to a difference in the law.

Comity is a recognition which one nation extends within its own territory to the legislative, executive, or judicial acts of another. It is not a rule of law, but one of practice, convenience, and expediency. Although more than mere courtesy and accommodation, comity does not achieve the force of an imperative or obligation. Rather, it is a nation’s expression of understanding which demonstrates due regard both to international duty and convenience and to the rights of persons protected by its own laws.

41 Id. §443 comment i (“The act of state doctrine applies to acts such as constitutional amendments, statutes, decrees and proclamations …”).