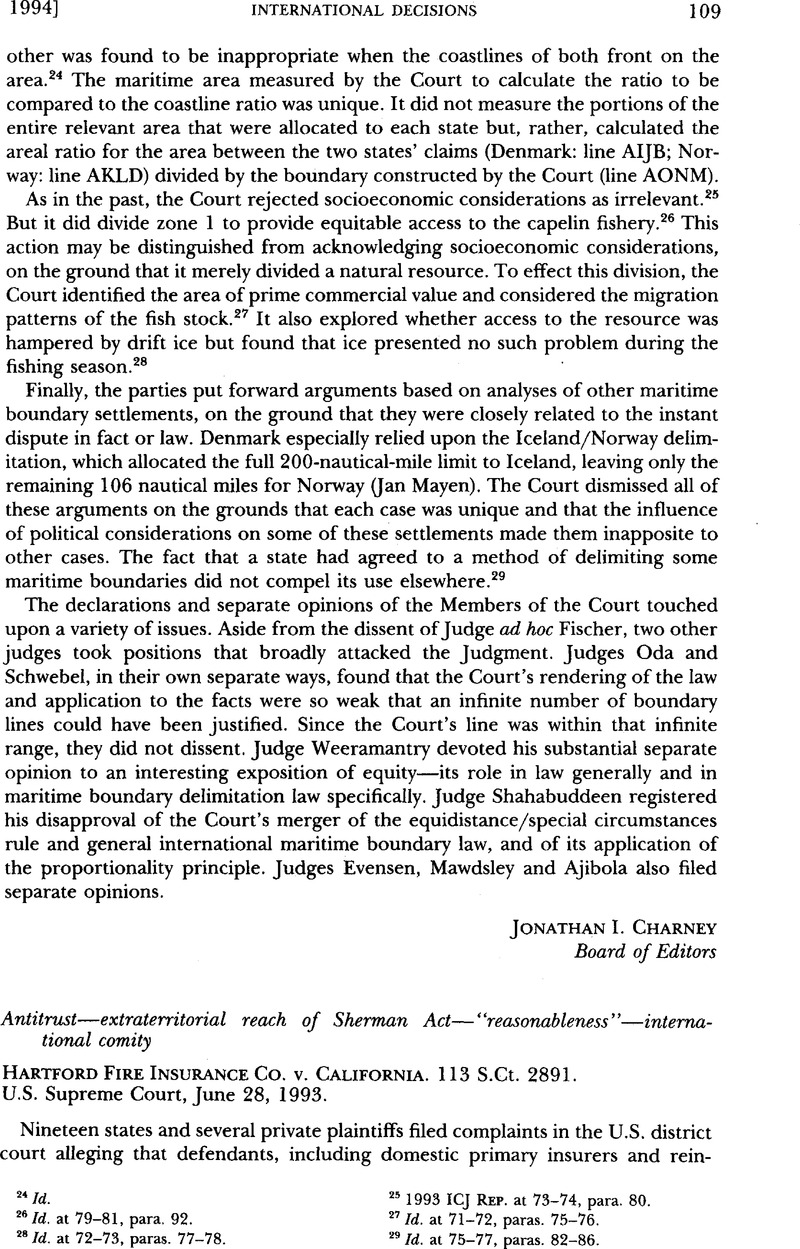 2 In re Insurance Antitrust Litigation, 723 F.Supp. 464 (N.D. Cal. 1989). Section 2(b) of the McCarran-Ferguson Act provides that the Sherman Act applies “to the business of insurance to the extent that such business is not regulated by State Law.” Section 3(b) stipulates that nothing in the McCarran-Ferguson Act “shall render the … Sherman Act inapplicable to any agreement to boycott, coerce, or intimidate, or act of boycott, coercion, or intimidation.” 15 U.S.C. §§ 1012(b), 1013(b) (1988).

11 Id. at 2911. The majority opinion provides no explanation for its failure to address the “other considerations” relevant to applying international comity or finding jurisdiction, set forth in section 403(2), infra note 14.

The district court had concluded that the London reinsurance markets had a direct and substantial interest in maintaining their financial viability, which was at risk, as a part of the framework of English reinsurance market regulation by collectively limiting the overseas risks their members assume pursuant to authority delegated by Parliament. 723 F.Supp. at 490.

(2) Whether exercise of jurisdiction over a person or activity is unreasonable is determined by evaluating all relevant factors, including, where appropriate:

(b) the connections, such as nationality, residence, or economic activity, between the regulating state and the person principally responsible for the activity to be regulated, or between that state and those whom the regulation is designed to protect;

(c) the character of the activity to be regulated, the importance of regulation to the regulating state, the extent to which other states regulate such activities, and the degree to which the desirability of such regulations is generally accepted;

(d) the existence of justified expectations that might be protected or hurt by the regulation;

(e) the importance of the regulation to the international political, legal, or economic system;

(f) the extent to which the regulation is consistent with the traditions of the international system;

(g) the extent to which another state may have an interest in regulating the activity; and

(h) the likelihood of conflict with regulation by another state.

21 U.S. Dep’t of Justice, Antitrust Enforcement Guidelines for International Operations 31–32 (1988) (footnote omitted). The Department holds firmly to the view that any antitrust suit prosecuted by it should not be subject to dismissal by U.S. courts on the basis of comity since the decision to prosecute

amounts to a determination by the Executive Branch that the interests of the United States supersede the interests of any foreign sovereign and that the challenged conduct is more harmful to the United States than any injury to foreign relations that might result from the antitrust action. In addition, government suits do not create the same risk as that raised by private actions that a judicial finding of liability will intrude on the legitimate interests of foreign sovereigns because, unlike a private plaintiff, the U.S. Government will have considered those interests before bringing suit.