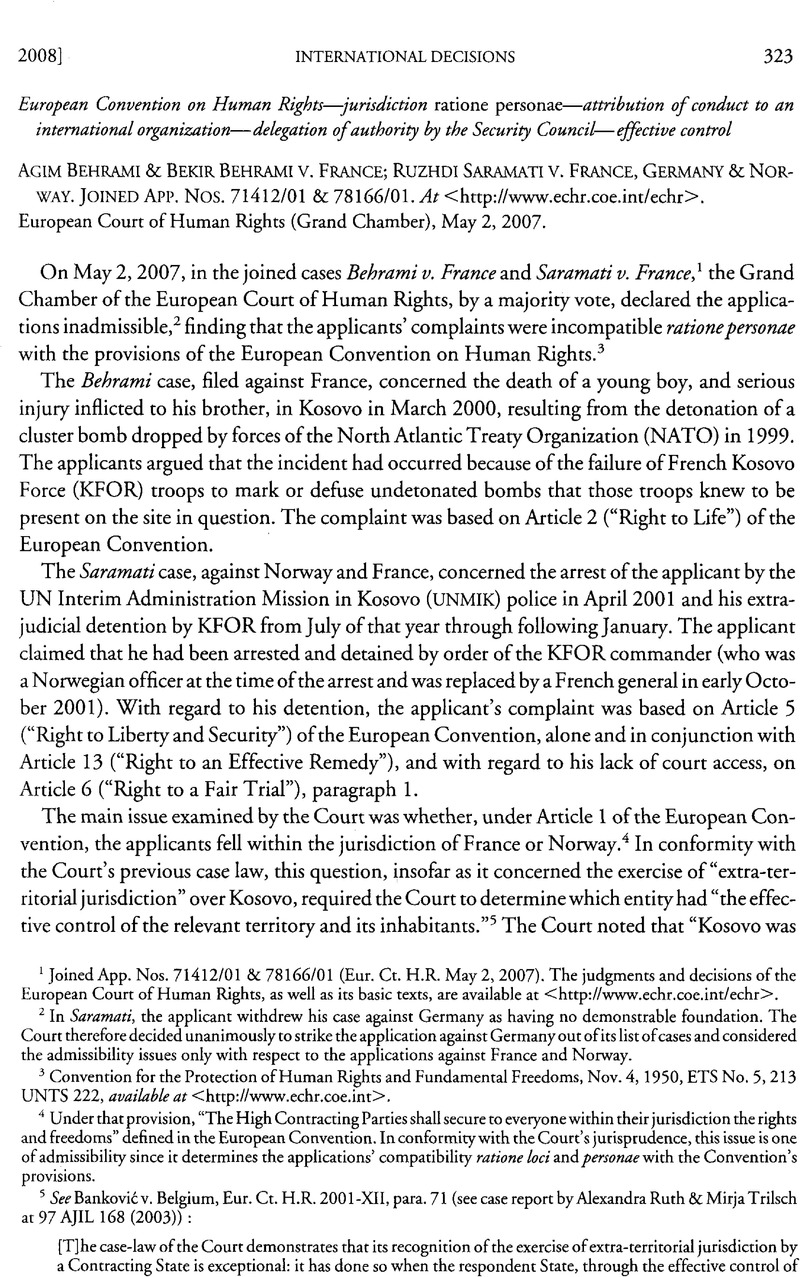 4 Under that provision, “The High Contracting Parties shall secure to everyone within their jurisdiction the rights and freedoms” defined in the European Convention. In conformity with the Court’s jurisprudence, this issue is one of admissibility since it determines the applications’ compatibility ratione loci and personae with the Convention’s provisions.

[T]he case–law of the Court demonstrates that its recognition of the exercise of extra–territorial jurisdiction by a Contracting State is exceptional: it has done so when the respondent State, through the effective control of the relevant territory and its inhabitants abroad as a consequence of military occupation or through the consent, invitation or acquiescence of the Government of that territory, exercises all or some of the public powers normally to be exercised by that Government.

7 The Court noted that in this respect the present cases were different from Bosphorus Hava Yollan Turizm ve Ticaret Anonim Şirketi v. Ireland, Eur. Ct. H.R. 2005–VI, where it had declared itself competent to consider the seizure of the applicant’s leased aircraft carried out by the respondent state authorities, on its territory, and pursuant to a decision by one of its ministers.

8 The qualification “in principle” appears in paragraph 141. It should be noted, however, that at paragraph 151 the Court presents a stronger formulation, according to which the actions of KFOR are “directly attributable to the UN.”

11 In fact, draft Article 3 corresponds mutatis mutandis to Articles 1 and 2 of Responsibility of States for Internationally Wrongful Acts. See Report of the International Law Commission on Its Fifty–third Session, UN GAOR, 56th Sess., Supp. No. 10, at 63–74, UN Doc. A/56/10 (2001).

16 This conclusion would seem to remain valid even if, in this context, the test of the “effective control” were to be applied in a more flexible way than for the attribution to a state of conduct performed by a de facto organ. See Paolo, Palchetti, Azioni di forze istituite o autorizzate dalle Nazioni Unite davanti alla Corte europea dei diritti dell’uomo: i casi Behrami e Saramati, 90 Rivista di Diritto Internazionale 681, 686–87 (2007)Google Scholar.

It is therefore the case that the impugned action and inaction are, in principle, attributable to the UN. It is, moreover, clear that the UN has a legal personality separate from that of its member states ([Reparation for Injuries Suffered in the Service of the United Nations, 1949 ICJ Rep. 174 (Apr. 11)]) and that that organisation is not a Contracting Party to the Convention.

18 The Court noted (para. 151, emphasis added) that “[i]n the present cases, the impugned acts and omissions of KFOR and UNMIK cannot be attributed to the respondent States and, moreover, did not take place on the territory of those States or by virtue of a decision of their authorities.”

21 See, in particular, the following passages:

Article 5 deals with the . . . situation in which the lent organ or agent still acts to a certain extent as organ of the lending State or as organ or agent of the lending organization. This occurs for instance in the case of military contingents that a State placed at the disposal of the United Nations for a peacekeeping operation, since the State retains disciplinary powers and criminal jurisdiction over the members of the national contingent. In this situation the problem arises whether a specific conduct of the lent organ or agent has to be attributed to the receiving organization or to the lending State or organization.” {Id. (footnote omitted, emphasis added))

23 See draft Articles 25 to 28 and the commentaries thereto, 2006 ILC Report, supra note 19, at 277–86. Draft Article 28 (“International responsibility in case of provision of competence to an international organization”) provides:

24 In a recent report to the Security Council, the secretary–general envisaged the latter option as the most suitable kind of operation in a scenario where the security situation in a country would remain highly volatile (see Report of the Secretary–General on the Situation in Somalia Pursuant to Paragraphs 3 and 9 of Security Council Resolution 1744 (2007), para. 60, UN Doc. S/2007/204*).

31 R (on the application of Al–Jedda) (FC) v. Secretary of State for Defence, [2007] UKHL 58, para. 105, at <http://www.publications.parliament.uk/pa/ld/ldjudgmt.htm> (see case report in this issue by Alexander Orakhelashvili).