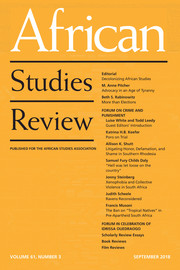 Forum on Crime and Punishment

Forum in Celebration of Idrissa Ouedraogo