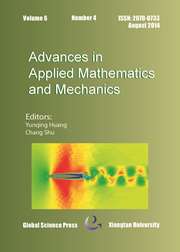 Advances in Applied Mathematics and Mechanics

The stability behavior of the Leipholz’s type of laminated box columns with nonsymmetric lay-ups resting on elastic foundation is investigated using the finite element method. Based on the kinematic assumptions consistent with the Vlasov beam theory, a formal engineering approach of the mechanics of the laminated box columns with symmetric and nonsymmetric lay-ups is presented. The extended Hamilton’s principle is employed to obtain the elastic stiffness and mass matrices, the Rayleigh damping and elastic foundation matrices, the geometric stiffness matrix due to distributed axial force, and the load correction stiffness matrix accounting for the uniformly distributed nonconservative forces. The evaluation procedures for the critical values of divergence and flutter loads with/without internal and external damping effects are briefly presented. Numerical examples are carried out to validate the present theory with respect to the previously published results. Especially, the influences of the fiber angle change and damping on the divergence and flutter loads of the laminated box columns are parametrically investigated.