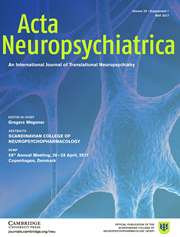 Visual hallucinations in CBS: reply from the author

We appreciate Dr Ng's comments on our report (Reference Hori, Inada, Sengan and Ikeda1). Certainly, we should be concerned about the presence of dementia in our patient. Indeed, the total MMSE score (18/30) in our case indicated a moderate cognitive decline. However, the patient was able to live an independent life for her age (89 years). She did not present parkinsonism, nor fluctuation of consciousness level. Although we could not completely exclude the possibility of diffuse Lewy body dementia (DLBD), it is probable that she did not have dementia (Reference McKeith, Galasko and Kosaka2).

According to White and Cummings (Reference White and Cummings3), there are psychiatric symptoms that both schizophrenia and Alzheimer's disease (AD) have in common. This might suggest that an unknown neurochemical alteration involving the dopaminergic and/or cholinergic axis underlies these two mental disorders. Based on the hypothesis that hallucination and delusion belong to cholinergic deficiency syndrome, Lemstra et al. (Reference Lemstra, Eikelenboom and Van Gool4) advocated prescribing a cholinomimetic system for these symptoms. Based on the above, we conclude that there might be an imbalance between the monoaminergic (dopaminergic) system and the cholinergic system that causes hallucination and delusion in AD as well as schizophrenia. Indeed, a cholinesterase inhibitor is used to protect against psychotic symptoms in both AD(Reference Perry, Marshall and Kerwin5–Reference Cummings7) and schizophrenia (Reference Allen and McEvoy8). In addition to inhibiting the breakdown of acetylcholine, galantamine augments the sensitivity to nicotinic agonists by modeling the structure of the nicotinic receptor. Atypical antipsychotics are tried for various symptoms in AD (Reference Brodaty, Ames and Snowdon9). We propose that the patients reported by Dr Ng and those reported by us presenting visual hallucinations in CBS have a pathogenic imbalance between acetylcholine and dopamine in common.

Finally, as Dr Ng suggested, we should be vigilant for the emergence of dementia in this patient. Two years have passed since her first visit to the outpatient clinic in our hospital, and she has remained in the same state as before.

Visual hallucinations in CBS: reply from the author
×

Visual hallucinations in CBS: reply from the author
×

Visual hallucinations in CBS: reply from the author
×
×