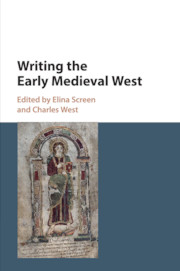 Far from the oral society it was once assumed to have been, early medieval Europe was fundamentally shaped by the written word. This book offers a pioneering collection of fresh and innovative studies on a wide range of topics, each one representing cutting-edge scholarship, and collectively setting the field on a new footing. Concentrating on the role of writing in mediating early medieval knowledge of the past, on the importance of surviving manuscripts as clues to the circulation of ideas and political and cultural creativity, and on the role that texts of different kinds played both in supporting and in subverting established power relations, these essays represent a milestone in studies of the early medieval written word.

‘Each of the contributors to this superb collection of essays provides a fresh and original insight into the intricate relationships between authors, texts and contexts in the early medieval West. At the same time, they also remind readers that among the most enduring outcomes of the work of great scholars are the affection and gratitude of their students.'

‘For four decades Rosamond McKitterick has been one of the most original and productive historians of Europe's early Middle Ages. She has published countless essays and a series of path-breaking monographs. She has also been a devoted and remarkably successful teacher, having supervised forty-two dissertations. It is fitting that this volume of essays in her honor gathers work by some of the most successful, and now prominent, of her students. It is fitting, too, that the book is organized into sections corresponding with the major themes that have animated her work. Readers will profit from the excellent work assembled here. The book is a worthy tribute to a superb scholar and a remarkable teacher, friend, and colleague.'

‘The essays of this volume not only demonstrate the continuing importance of the medium of writing and the written word in the ‘barbarian' successor states after the 'Fall of Rome'. Taken together they also demonstrate the crucial role of literacy itself as a catalyst of the social, cultural and political changes that came to shape the Christian West for many centuries to come.'

'There are many ways to measure the enormous impact Rosamond McKitterick has had on the study of early medieval history over the past four decades. The present volume provides one index: the fifteen contributors include just fourteen of the forty-seven (!) scholars whose PhD dissertations she has supervised. After an Introduction by Marios Costambeys and Matthew Innes that offers a more qualitative assessment of McKitterick's influence and shows how her work points to the future, the book unfolds in three parts, each with a brief introduction, that echo her principal lines of research: history and memory, the study of manuscripts, and the Carolingian construction of power through the written word. … this [book] … repays time spent with several chapters. That will be especially true for young scholars starting out on research in this vibrant field.'