Eloquence and Its Conditions 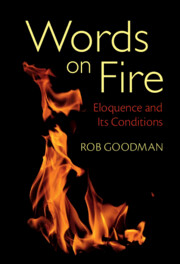 Why is political rhetoric broken – and how can it be fixed? Words on Fire returns to the origins of rhetoric to recover the central place of eloquence in political thought. Eloquence, for the orators of classical antiquity, emerged from rhetorical relationships that exposed both speaker and audience to risk. Through close readings of Cicero – and his predecessors, rivals, and successors – political theorist and former speechwriter Rob Goodman tracks the development of this ideal, in which speech is both spontaneous and stylized, and in which the pursuit of eloquence mitigates political inequalities. He goes on to trace the fierce disputes over Ciceronian speech in the modern world through the work of such figures as Burke, Macaulay, Tocqueville, and Schmitt, explaining how rhetorical risk-sharing has broken down. Words on Fire offers a powerful critique of today's political language – and shows how the struggle over the meaning of eloquence has shaped our world.

'A beautiful, complex, and powerful book about the beauty, complexity, and power of words. This is a major scholarly contribution to the rhetorical turn in political theory that offers an original and at times startling reading of eloquence, its long history as an object of study and practice, and its political potential for contemporary democracy. Impeccably researched, masterfully argued, but above all employing its own form of captivating eloquence, this book is a delight to read from beginning to end.'

'An urgent and historically informed diagnosis of a contemporary ill: the public breakdown of the rhetorical bargain between speakers and listeners. Goodman’s own eloquence in exploring its conditions is wondrous. He reminds us that to open oneself up to persuasion – much like seeking to persuade – is risky. But these risks are essential in a free and democratic way of life.'

'This book identifies a lost intellectual history of the rhetorical tradition, in which the speaker and audience strike bargains over exposure to risks: the speaker confronts the risk of rejection, the audience the risk of persuasion. Beginning with Cicero, orators grappled with the challenge of eloquence before an unpredictable public. In contemporary political life, however, rhetoricians have the upper hand, as political speakers insulate themselves from vulnerability, and the public bears all the risk. A remarkable contribution to political theory’s ‘rhetorical revival,’ Goodman’s work sheds new light on contemporary pathologies of political persuasion.'

'This beautifully-written, timely book draws our attention to the importance of rhetorical relationships. Today, we face a false choice between the spontaneous rhetoric of the demagogue and the self-protective rhetoric of elites. The rhetorical relationship between speaker and hearer has been all but forgotten. Goodman offers an alternative vision of rhetoric as a bargain – a relationship of mutual risk-taking in which everyone puts something on the line. While Goodman makes a valuable contribution to the history of classical and modern political thought, he also keeps one eye firmly focused on today’s troubles. It’s a fine balance and a rare achievement.'

'A wide-ranging and incisive study of the role of eloquence in public life. In an era marked by heated political exchanges and driven by new technologies in communication, controversies are in danger of increasing in intensity as opinions become embittered. This book offers a broad perspective on rhetoric extending back into classical antiquity to encourage reflection on the responsibilities and possibilities of speech. With compelling chapters on Cicero, Burke, Macaulay, Tocqueville and Schmitt, the book directs our attention to the dynamics as well as the costs of polarisation, indicating how we might better manage the role of rhetoric in politics.'

Richard Bourke - Professor of the History of Political Thought, University of Cambridge

'We live in a moment characterized by increasingly sophisticated political communications, in which elites deploy technology to refine and target their desired and polarized audiences. This tendency has real costs, as Goodman shows in this fine book. In addition to shielding political elites from the risky give and take of persuasion, Goodman argues that it creates a rhetorical opening for self-designated outsiders – demagogues who purport to tell it like it is. Goodman turns to the tradition of rhetoric to develop a timely – and important – account of how we might reimagine the nature of political rhetoric, and how this reconceived rhetoric might address one of the fundamental problems American politics faces today: political polarization.'

'This book stands at the intersection of the current revivals of rhetoric in political theory, of Roman political thought, and of civic republicanism. Although many books and essays are worthy additions to these burgeoning fields, Goodman’s Words on Fire is a 'must read' for both students and scholars who are at all interested in the renaissance of these studies. For Goodman, the Ciceronian rhetorical tradition offers itself as a critique of the 'technologization of politics,' which has come to include the use of an 'algorithmic' rhetoric to deny agency to both orator/politician and audience/citizenry. In opposition to this undermining of political choice, Goodman shows how Cicero and his successors present us with a rhetorical alternative, in which political speakers exercise the virtues of risk and in which democratic citizens make themselves vulnerable to altering their opinions in response to the persuasive abilities of political rhetors.'