Home
Women and Shakespeare in the Eighteenth Century

Women and Shakespeare in the Eighteenth Century 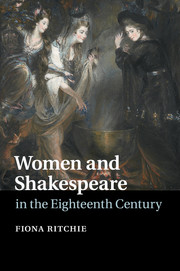 Fiona Ritchie analyses the significant role played by women in the construction of Shakespeare's reputation which took place in the eighteenth century. The period's perception of Shakespeare as unlearned allowed many women to identify with him and in doing so they seized an opportunity to enter public life by writing about and performing his works. Actresses (such as Hannah Pritchard, Kitty Clive, Susannah Cibber, Dorothy Jordan and Sarah Siddons), female playgoers (including the Shakespeare Ladies Club) and women critics (like Charlotte Lennox, Elizabeth Montagu, Elizabeth Griffith and Elizabeth Inchbald), had a profound effect on Shakespeare's reception. Interdisciplinary in approach and employing a broad range of sources, this book's analysis of criticism, performance and audience response shows that in constructing Shakespeare's significance for themselves and for society, women were instrumental in the establishment of Shakespeare at the forefront of English literature, theatre, culture and society in the eighteenth century and beyond.

'This compelling and original book enriches and complicates the history of Shakespeare’s reputation. Fiona Ritchie expands traditional notions of literary criticism beyond the printed page to include play-going, patronage and performance, at the same time introducing new evidence of the range and depth of women’s cultural work in the eighteenth century.'

‘In a lively and engaging book Fiona Ritchie explores the construction of Shakespeare’s reputation in the eighteenth century and the active and substantial role women played in this as performers, critics, editors and playgoers. This book provides an important contribution to the fields of Shakespeare and women's studies.’

'In this groundbreaking book, Ritchie explores the role of eighteenth-century women in establishing Shakespeare as Britain’s national playwright. … This volume is a fine addition to the scholarship on Shakespeare, theater history, and women's intellectual history. … Highly recommended. Upper-division undergraduates through faculty.'