The Elements of Law, De Cive and Leviathan 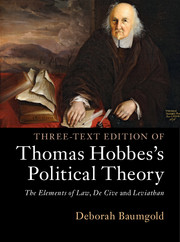 An exciting English-language edition which for the first time presents Thomas Hobbes's masterpiece Leviathan alongside two earlier works, The Elements of Law and De Cive. By arranging the three texts side by side, Baumgold offers readers an enhanced understanding of Hobbes's political theory and addresses an important need within Hobbes scholarship. The parallel presentation highlights substantive connections between the texts and makes it easy to trace the development of Hobbes's thinking. Readers can follow developments both at the 'micro' level of specific arguments and at the 'macro' level of the overall scope and organization of the theory. The volume also includes parallel presentations of Hobbes's chapter outlines, which serve as a key to the texts and are collected in a précis appendix.

'This edition constitutes a remarkable undertaking. It has been executed with precision and astute judgement throughout and will prove invaluable for anyone doing serious research on the development of Hobbes’s political theory.'

'Baumgold's arrangement of Hobbes's three major political treatises in parallel columns greatly facilitates our study of the changes in his views over a decade and also the evaluation of claims that those changes were significant. For Hobbes scholars, Baumgold's book is the equivalent of 'Gospel Parallels'.'

'How did Hobbes compose, think, and rethink his political philosophy? Deborah Baumgold's edition offers new insights and will spur fruitful contributions to our debates for year to come.'

'That Hobbes wrote three versions of his political theory is widely recognized; that no one has yet published his three key theoretical texts together is remarkable. Baumgold’s text thus fills a very important gap in Hobbes scholarship, bringing together The Elements, De Cive, and Leviathan in an accessible, elegant, and precise form. The Three-Text Edition of Thomas Hobbes’s Political Theory will be an essential resource for scholars and readers.'

'Hobbes scholars and students owe an enormous debt of gratitude to Deborah Baumgold for this work, which by mapping the three main versions of Hobbes’s political theory onto each other provides an unparalleled resource for comparative study. Three Text Edition of Thomas Hobbes’s Political Theory greatly simplifies the challenging task of discerning the evolution of Hobbes’s thinking on key topics in his political theory.'

'Baumgold (Univ. of Oregon) has done all serious students of Hobbes a great service in editing the Three-Text Edition of Thomas Hobbes’s Political Theory … All in all, it is difficult to imagine a more useful resource for the student of Hobbes. Highly Recommended.'